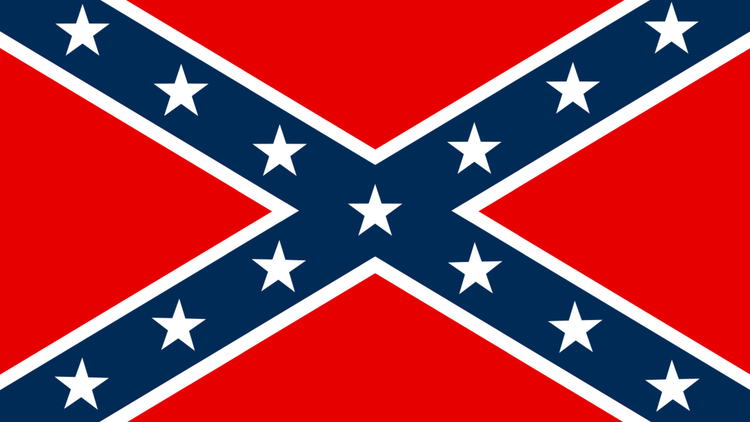 Just because Confederate flags and similar symbols have been ripped down from most public places, don't imagine the crusade against them is over.

For South Carolina restaurateur Maurice Bessinger, the war is already a couple of years old. Mr. Bessinger's barbecue restaurant in Columbia, S.C. has long displayed a Confederate flag outside on a pole in the parking lot, and inside the owner distributed various tracts and pamphlets about the Confederacy, the War Between the States and related issues. Once the war against the Confederate flag on top of South Carolina's capitol dome lurched into high gear a few years ago, Mr. Bessinger's establishment — indeed his very business — was dragged into jeopardy.

Mr. Bessinger manufactures a mustard-based barbecue sauce that was sold at large chain stores like Wal-Mart and Winn-Dixie. All of a sudden, that stopped. The stores refused to carry his brand anymore, some of them (Wal-Mart, for example) claiming piously that they didn't condone the slavery Mr. Bessinger supposedly defended. (He doesn't.)

Of course, not condoning slavery didn't stop Wal-Mart from selling products manufactured by slave labor in Communist China, as Business Week reported around the same time. Of course again, slave labor had nothing to do with it.

The real reason the stores dropped Mr. Bessinger's sauce (as he disclosed in an open letter to the public) was that some people were mounting a concerted campaign of vandalism against his product on the shelves of the stores that carried it. Bottles were found opened or smashed in the aisles at stores across several Southern states.

With most products, the stores would have deployed security guards or video cameras and hauled the vandals into court.

But everyone knew who the vandals were and what race they belonged to, so no one dared take action.

The action they did dare take was to drop Mr. Bessinger's sauce, costing him even today some $5 million a year, and wrap themselves in sonorities about "not condoning slavery."

Now, yet another non-condoner of slavery has popped up, the mammoth corporation SCANA based in South Carolina itself. As the Washington Post reported this week, SCANA has suddenly decided that its employees can't park company vehicles in Mr. Bessinger's parking lot or display the Confederate flag on their own personal cars in the company's parking lot. ["In S.C., Flag Dispute Enters Private Sector,"Manuel Roig-Franzia, Washington Post, Sept 1, 2002]

But in South Carolina the Good Old Cause is not entirely lost, and the company's actions sparked massive protests, with marches outside the company headquarters and one state legislator suggesting he'd look into repealing the company's monopoly on gas and electricity sales.

The company's attack on Mr. Bessinger "just hit me as a basic slap at free speech and freedom of statement," state Sen. Glenn McConnell told the Post. "What they're doing is discriminating against a man's business because of his political beliefs.... You're getting on a slippery slope."

Actually, we're quite a ways down the slippery slope, and we got there long before corporate behemoths like SCANA pushed us down it. When black radicals began whining about the Confederate flag some years ago, their claim was that they didn't care if you displayed the flag on private property; they just objected to it on public sites like the state capitol.

Now we see the real agenda, which was to strip away the flag and similar symbols completely, including on private property like Mr. Bessinger's restaurant and the SCANA parking lot.

Once the protests started, SCANA apparently got frightened, as corporate behemoths tend to do when you yell at them loudly enough. One spokesman said the bumper sticker ban was still in effect, while the chief executive officer said it wasn't. He also told the threatening lawmaker that his own great-grandfather fought for the Confederacy.

That's the kind of grease that a few squeaks of the wheel can win.

As long as that kind of non-obsession with the past flourishes and as long as corporations spout the cant of "not condoning slavery" even as they peddle goods made by real slave labor today, you can expect the war against white, Southern and Confederate symbols to stay in business.

If the targets of the war want to stop it, they'll have to fight it the way Mr. Bessinger and his friends are fighting it now.