Even having predicted that the media's attacks on Trump would be unprecedented, I'm still amazed. Every single news outlet is dedicated to hysterically denouncing Trump, every minute of every day, while cooing at Hillary.

Everything Hillary has ever touched has failed, been engulfed in scandal, resulted in massive investigations, litigation, financial ruin, prison or death. The final stage of any Hillary enterprise is a grand announcement that Hillary did not technically break the law. Or no one can prove she did. Or, even if she did, no one ever gets prosecuted for it.

She's prone to coughing fits and lapses of memory in the middle of speeches, and falls down all the time. But that's not nearly as important as the media's manufactured story about Trump throwing a baby out of a rally!

Trump is supposed to be joined at the hip to David Duke based on not "disavowing" him with sufficient ferocity the 17th time he was asked about this person he's never met, never mentioned and didn't invite to speak at his convention.

Hillary invited the mother of violent cop-hating criminal Mike Brown to speak at her convention, and the Democratic platform expressly endorses the anti-police Black Lives Matter—even as these celebrated cop haters inspire the mass slaughter of police officers across the country, in New York City, Dallas and Baton Rouge. 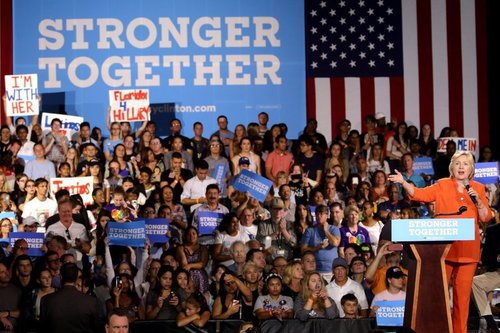 Now we find out that another honored guest at Hillary events is the father of Omar Mateen, the Muslim jihadist who murdered 49 people at a gay nightclub in Orlando a few months ago. On Monday night, he attended a Hillary rally where he sat cheering, right behind her on the stage.

Is David Duke's father given VIP seating at Trump events? (As long as you mention it, did David Duke gun down 49 people in June? Or ever? Or anyone?)

It took the national media 24 hours to mention the fact that the jihadist's father is a big Hillary supporter, sitting in the camera's line of sight at her Florida rally. A Google search of Trump and David Duke produces more than 11 million hits. A Google search of Hillary and Omar Mateen gets a few hundred thousand hits.

Hillary's being supported by the father of a jihadist is treated like back-page stuff, presented amid florid excuses and rationalizations. It was a staffer's mistake, an "unforced error," and Hillary's opponents are "leaping on it."

The main story this week: The media's psychotic claim that Trump called for Hillary's assassination.

Hmmm. What could Second Amendment people "do"? One thing they could do is what they did do — in 1994. That was the year gun rights supporters voted out dozens of Democrats who voted wrong on guns, ushering in the first Republican Congress in 40 years.

It's been nearly a quarter century, and the Democrats are still so traumatized by their sweeping losses in 1994, that, even after Gabby Giffords was shot in Arizona, even after the Aurora movie theater shooting, even after the Sandy Hook massacre, Democrats refused to take up a gun bill in the U.S. Senate.

Apparently, the only news you'll be getting from now until the election is the media's own insane interpretation of every little thing Trump says or does. Anyone remember the week-long scandal about a star on a Trump retweet?

No one, not even Joe McCarthy, has ever faced this level of obsessive hatred from our constitutionally protected guardians of liberty in the press. Anyone else would be chewed up and spit out after one minute of such relentless attacks.

But sissy conservatives who have never faced one minute of press hostility blame the victim, saying it's Trump's fault for giving the media openings to twist his words.

The sissies have no idea what they're talking about. There's no way to phrase something so that it can't be lied about. Here are the first three lines from an affectionate article on Hillary Clinton in Wednesday's New York Times:

Hillary to accept bribes from Goldman Sachs, Halliburton and the Koch brothers.

— "Hillary Clinton's campaign would like to turn the drip-drip-drip of Republican defectors abandoning Donald J. Trump into a deluge."

Hillary supports the use of Chinese water torture.

— "On Wednesday, after days in which several high-profile Republicans said they could not support Mr. Trump or were endorsing Mrs. Clinton, her campaign introduced an official outreach effort to target Republicans ..."

There's no strategy for overcoming this level of media hostility. Trump has made some mistakes during this campaign, but he hasn't done anything wrong for months now. He could say "yes," and the media would change the question to, "Are you a child molester?"

Craven Republicans who blame Trump for the media's lies may as well blame a rape victim for wearing a short skirt. Except with Trump, it's the Muslim standard: They're blaming a woman's rape on being a woman.

Ann Coulter is the legal correspondent for Human Events and writes a popular syndicated column for Universal Press Syndicate. She is the author of ELEVEN New York Times bestsellers—collect them here.