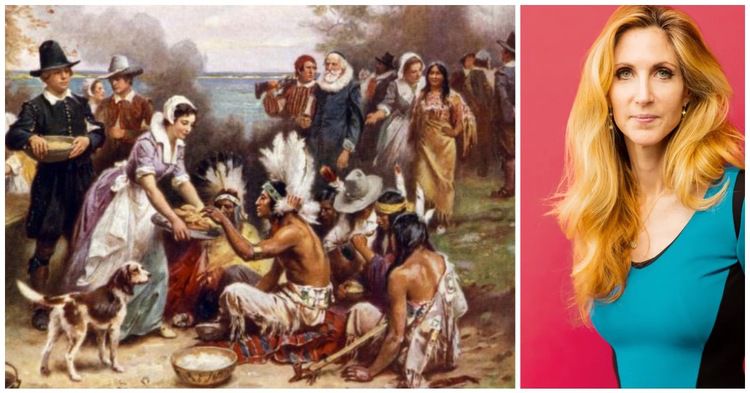 Ann Coulter On The War On Thanksgiving: Thanksgiving For Dummies ... Sorry, I Mean College Professors!

See earlier: Of Course Thanksgiving Is Racist! It Was Invented By White People. But Have A Happy Anyway and more War On Thanksgiving coverage from VDARE.com.

As every contemporary school child knows, the first Thanksgiving took place in 1621, when our Pilgrim forefathers took a break from slaughtering Indigenous Peoples to invite them to dinner and infect them with smallpox, before embarking on their mission to fry the planet so that the world would end on Jan. 22, 2031. (Copyright: Alexandria Ocasio-Cortez)

Consider this description of the Pilgrims' treatment of the Indigenous Peoples:

"They were the worst of conquerors. Inordinate pride, the lust of blood and dominion, were the mainsprings of their warfare; and their victories were strained with every excess of savage passion."

It was Indians, not Pilgrims, who let out the “Mohawk war-cry” that made the blood run cold.

This is why the Wampanoag had a lot to celebrate that first Thanksgiving. They were delighted to have such excellent (European) allies against the terroristic Iroquois and Narragansett.

The Pilgrims also had much to be thankful for. Of more than 100 passengers aboard the Mayflower, only 44 survived the first winter, felled by scurvy, malnutrition and the bitter cold. Even the ones who made it did so largely thanks to the friendly Wampanoag, who shared their food with the Europeans and taught them how to till the land. 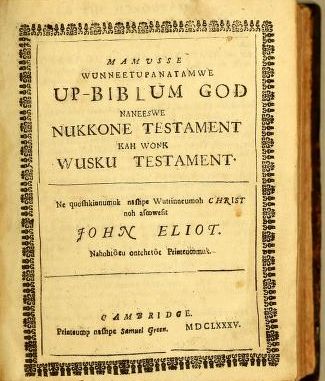 The Puritans, who came soon thereafter, so loved their Indian compatriots that the great missionary John Eliot translated sermons for the Algonquians in their own language. Indeed, the very first Bible printed in the Western Hemisphere was Eliot’s Massachusett-language Bible, published in 1663, titled “Mamusse Wunneetupanatamwe Up-Biblum God.”

(For those interested in Coulter arcana, Eliot was an assistant of Rev. Thomas Hooker, the same Puritan minister that my ancestors followed to the New World.)

The warm relations between Pilgrims and the (mostly) gentle Algonquins doesn’t fit the White Man Bad thesis that is the entire point of all history taught in America today. In fact, as any sane, reasonable person can probably surmise: Some white men were kind, and some were cruel. Some Indians were neighborly—and some were bloodthirsty killers.

Parkman describes a typical Iroquois celebration that would cap off a war raid on their fellow Indigenous Peoples:

“The village was alive with sudden commotion, and snatching sticks and stones, knives and hatchets, men, women and children, yelling like fiends let loose, swarmed out of the narrow portal, to visit upon the captives a foretaste of the deadlier torments in store for them .... [W]ith brandished torch and firebrand, the frenzied multitude closed around their victim. The pen shrinks to write, the heart sickens to conceive, the fierceness of [the captive’s] agony ... The work was done, the blackened trunk was flung to the dogs, and, with clamorous shouts and hootings, the murderers sought to drive away the spirit of their victim.”

The Iroquois, he writes, “reckoned these barbarities among their most exquisite enjoyments.”

[ASIDE: Compare Parkman’s thrilling passage to droning cliches like, "While America’s indigenous population at large is underrepresented in politics and popular culture, Native women are even more marginalized” (a current Harvard offering)—and you’ll understand why the kids don’t like to read anymore.]

And here’s an Iroquois practice that university professors might want to steal and ascribe to the White Man—don’t worry, your students aren’t bright enough to figure out that you’re lying to them.

After killing “a sufficient number of captives,” Parkman says, the Iroquois “spared the lives of the remainder, and adopted them as members of their confederated tribes, separating wives from husbands, and children from parents, and distributing them among different villages, in order that old ties and associations might be more completely broken up.” JUST LIKE TRUMP!!!

Here’s one for the Womyn’s Studies Department: Having completely conquered the Lenape, the Iroquois humiliated the survivors by making them take women’s names.

Before the first European stepped off Mayflower, the Iroquois’ genocidal wars against their fellow Indians had already depopulated large parts of New England. Their murderous raids had scattered the farming tribes in all directions, often to their demise. “Northern New Hampshire, the whole of Vermont and Western Massachusetts had no human tenants but the roving hunter or prowling warrior,” Parkman writes.

The irony of the moron’s version of Thanksgiving is that the brave and honorable attributes of the American Indian are drained from all the PC stories. In the made-up history, Indians are only pathetic.

By contrast, the true story told by Parkman shows both the savagery and superstition, but also the courage and honor. Thus, for example, the Hurons “held it disgraceful to turn from the face of an enemy when the fortunes of the fight were adverse.” As the Indian captive of the Iroquois was being tortured alive, Parkman reports, he raises his voice in “scorn and defiance.” How’s that for machismo?

That’s the reason we name our sports teams and military armaments after Indians. It’s a tribute to their honor, intelligence and bravery. It’s why Americans love to boast of having Indian blood—even when it’s not true (and not only in order to land a professorship at Harvard).

But that’s not the image the left wants for Indians. Oh, no. They want to re-brand Indians as loser victims, in need of liberals' tender ministrations.

Real Americans honor Indians and also honor the courageous Pilgrim settlers who brought Christian civilization to a continent, a miraculous union that we celebrate on this wonderful holiday.