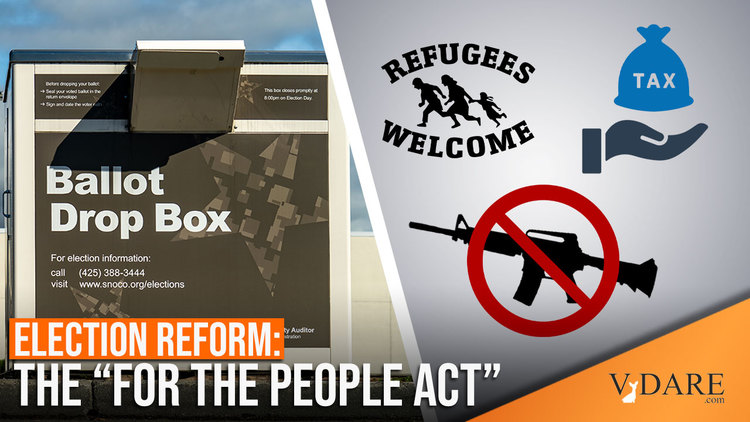 Earlier by Ann Coulter: Voter Fraud Never Happens! (Except in These 10,000 Cases)

Why aren’t Republicans screaming from the rooftops about the Democrats’ plans to change voting rules to give themselves an advantage?

Their sleazy election bills, HR 1, the “For the People Act,” and HR 4, the “John Lewis Voting Rights Advancement Act,” are intended to help Democrats win majorities in both houses of Congress, at which point they will ignore Republicans entirely, end the filibuster, and pass everything in AOC’s Dream Journal—amnesty, gun control, a wealth tax, and a rainbows and unicorns energy bill.

So it’s kind of important for Republicans to kill these bills in the crib. It shouldn’t be hard. All they have to do is tell people what’s in them.

Are Republicans counting on Sen. Joe Manchin, D-W.Va., to save them? The GOP defeated HillaryCare in the 1990s far more decisively … then it came roaring back a few years later as Obamacare.

Currently, Manchin opposes the For the People bill, but supports the even more execrable John Lewis bill. Both will completely rewrite state election laws to favor Democrats, but at least For the People will be done by Congress. The John Lewis bill will give unelected bureaucrats at the Justice Department vast power to impose voting rules on the states. Based on previous such exercises of unaccountable power, 10-year-olds will soon have the right to vote. (See Title IX.)

Unless Republicans agree to ludicrous voting rules that give Democrats a partisan advantage, they’re racist. That’s the full argument. Republicans are trying to “suppress the vote” of black and brown people! John Lewis risked his life for the right to vote!

If that’s why Republicans don’t want to talk about these bills, they better get used to it. They’re going to be called “racist” a lot more if that’s all it takes to stifle the opposition.

Of course, Democrats’ own voters respond to John Lewis’ touching story by saying, Good for him, but—when is the election again? Tuesday? Yeah, that’s not going to be convenient for me.

And that’s the nub of the problem. The Democrats have a lot of what we call “unmotivated voters.” Risk their lives to vote? They won’t risk missing a couple hours of TV.

Consequently, Democrats have to mobilize armies of volunteers to carry their voters on gurneys to the polls on Election Day.

Wouldn’t it be easier if they had a few months to get their voters to the polls? What if their voters didn’t have to show up at all?

Why, yes! That would be much easier.

This is why the For the People bill mandates universal mail-in voting. Asking people to show up to vote is a dirty trick to “rig our democracy,” according to the left-wing group Indivisible. Litter the countryside with mail-in ballots months before an election—or you’re a Nazi.

In fact, apart from a worldwide pandemic, there’s no reason for mail-in voting. Studies show it increases voter turnout only modestly. But mail-in voting sure presents a lot of opportunities for fraud! It’s almost like Democrats consider that a feature, not a bug.

In other words, instead of filling out a secret ballot in the presence of election officials, you will be out and about, at home, at the office, at the ballpark with your ballot, able to prove to others how you voted—to impress them, or perhaps because you’re being paid or threatened. And that’s assuming it’s you holding the ballot.

Not to worry! The Democrats deal with the possibility of imposters requesting mail-in ballots by … prohibiting the states from requesting voter I.D.

Huh, that’s odd. If you wanted to ensure that only eligible voters are voting, wouldn’t you want to—oh wait, I see.

Liberals will not rest until convicted felons—a key Democratic constituency—are fully participating members of our democracy. Or at least have ballots that can be filled out for them.

Unfortunately, some of our more unenlightened states believe that a person who has been convicted of violating society’s laws should be denied the right to choose who writes them. The For the People bill fixes that by forcing states to give felons the right to vote.

Speaking of felons, the For the People Act requires states to automatically register people to vote whenever they provide information to state agencies, such as the Department of Motor Vehicles, public universities, and, off the top of my head, state welfare bureaucracies, unemployment offices and prison facilities.

That’s a lot of ballots for Democratic volunteers to mine!

In 1994, in response to the stalking and murder of actress Rebecca Schaeffer by a crazed fan who got her address through the California Department of Motor Vehicles, Congress passed the Driver’s Privacy Protection Act, prohibiting state DMVs from releasing personal information to the public. One of the main sponsors was Sen. Barbara Boxer, who recited case after case of women stalked, harassed, raped and killed by men who had tracked their victims with information provided by the DMV.

With the automatic voter registration in the For the People bill, federal law would require states to release that information. Simply by getting a driver’s license or unemployment benefits, your name, address and phone number would be available to your stalker through the voting rolls. (Also to bill collectors, parole officers, process servers, etc.) Voter registration lists are publicly available for electioneering purposes.

The Democrats’ “voting rights” bill is a stalkers’ delight. But at least no one will have his vote “suppressed” by having to engage in the monstrously difficult task of registering to vote or showing up on Election Day. Your choice, America: A few pesky stalkers kill their victims, or Democrats call you “racist.”