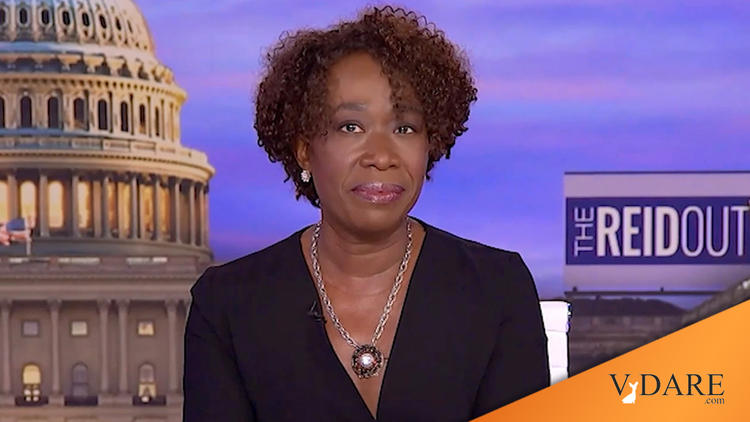 Ann Coulter: This Thanksgiving, Joy-Ann Reid Has Much To Be Thankful For

Earlier: The Thanksgiving Of A Grateful Nation—And The Ingratitude Of A Few

Why such a sourpuss, Joy-Ann? On the whole, life and MSNBC are treating you pretty well. And yet, over the last 10 years, you have complained pretty much nonstop about how badly you, and “people who look like [you],” are treated in America.

I will take on faith, Joy-Ann, that your life up to age 16—spent in the racist hellscape that was 1980s Denver, Colorado—was practically a maelstrom of cross burnings, Night Riders and segregated water fountains.

Let’s focus on the recent past.

Your brief daytime show on MSNBC made ratings history, garnering only 38,000 viewers in the demo its first day on air—the lowest for the entire network! That inched up to 56,000 viewers two days later, the second lowest for the network. Ronan Farrow’s show debuted the same week. But while he was quickly cashiered for poor ratings—you were promoted, even though he is white and you are black. Dodged a bullet there!

You weren’t prosecuted for making a false FBI report when you claimed that right-wing saboteurs had hacked your blog, planting long, venomous threads about gay people. It seems your go-to attack for celebrities and Republicans is to accuse them of being gay. (For example, you described Dick Cheney “topping off” Sean Hannity—gay slang for oral sex—and repeatedly ran your “Top 5 ‘totally not gay celebrities of the year.'”)

Nor were you fired for your preposterous, and quickly disproved, lies about having been hacked when it was you who mocked people for being gay—including Oprah.

Your many, many blog posts sneering at gays were written just 10 years earlier, when you were an adult and a professional journalist. Meanwhile, teenagers—even white ones!—are being thrown out of college for the stupid things they said on Snapchat when they were 15. But you came through like a champ, without consequence—despite being black!

Indeed, instead of firing you, MSNBC gave you a prime-time show. This is the network that canned Chris Matthews (astonishingly, another white male) for telling girls they’re pretty. And who took the humiliated Matthews’ time slot? YOU DID! Despite the fact that he is white and you are black.

Joy-Ann: “I’ll say it again: People on the right would trade all the tax cuts for the ability to openly say the N-word like in ‘the good old days.'”

That comment, like many made by you, seems at variance with the facts, and not based in reality. But has your delusional hatred of white Americans held you back? Not so’s you’d notice.

Joy-Ann: “Currently, most K-12 students already learn a kind of Confederate Race Theory, whereby the Daughters of the Confederacy long ago imposed a version of history wherein slavery was not so bad and had nothing to do with the civil war, and lynchings and violence never happened.”

Were you taught “Confederate Race Theory” at your high school, Joy-Ann? You know, the high school in Denver, Colorado, in the 1980s? My heart wants to believe you, but my head is telling me, “This woman is a lunatic fantasist.”

I’ll tell you why I say that. Just 10 years after you matriculated at Denver’s diverse Montbello High School, a Nation of Islam minister was invited to speak, whereupon he told the assembly (all boys, no girls allowed) that, while blacks were building the Egyptian pyramids, white people “ate their dead” and “slept with animals.” Even you have to admit, THAT wasn’t racist.

Joy-Ann: “[I love boxing because] it’s a sport, even at the turn of the 20th century, where a black man could beat up a white man in front of an entire crowd and not get lynched.”

Wow. People who are actually descended from American slaves—Joy-Ann is not one of them—don’t hate white Americans that much. Yet, strangely, white Americans, despite being white, haven’t held that against you.

Your immigrant parents came here in the late 1960s, settling in Iowa. Perhaps you rank Iowa up there with Denver as a bastion of Jim Crow, but even you would have to concede it was a step up from Guyana and the Congo.

While having zero American slave ancestry, you have managed to elbow aside actual descendants of American slaves (DOAS), gobbling up the benefits earned by their ancestors’ suffering, and intended for them. That was a good deal for you!

Finally, notwithstanding the White Power Structure, you have a job that reportedly pays $1.5 million a year, which is more than 99.9% of Americans make—even several white ones! All in all, that doesn’t sound so bad.