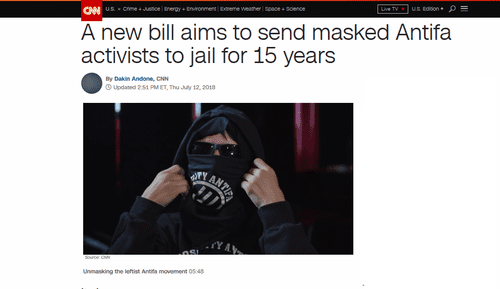 It’s not that Main Stream Media journalists support Antifa—MSM journalists ARE Antifa. The alliance between the System’s street enforcers and its Narrative enforcers has become clearer than ever in recent weeks as MSM operatives denounce a new bill—sponsored by four Republican white males—that would impose harsh Federal penalties on the use of masks while undertaking political terrorism. [“Unmasking Antifa” Act Introduced In Congress: 15 Year Sentence For Masked Mayhem, ZeroHedge, July 10, 2018]

With few exceptions, every story about the proposed bill adoringly quotes Antifa organizers and favorably describes their activities. For example: 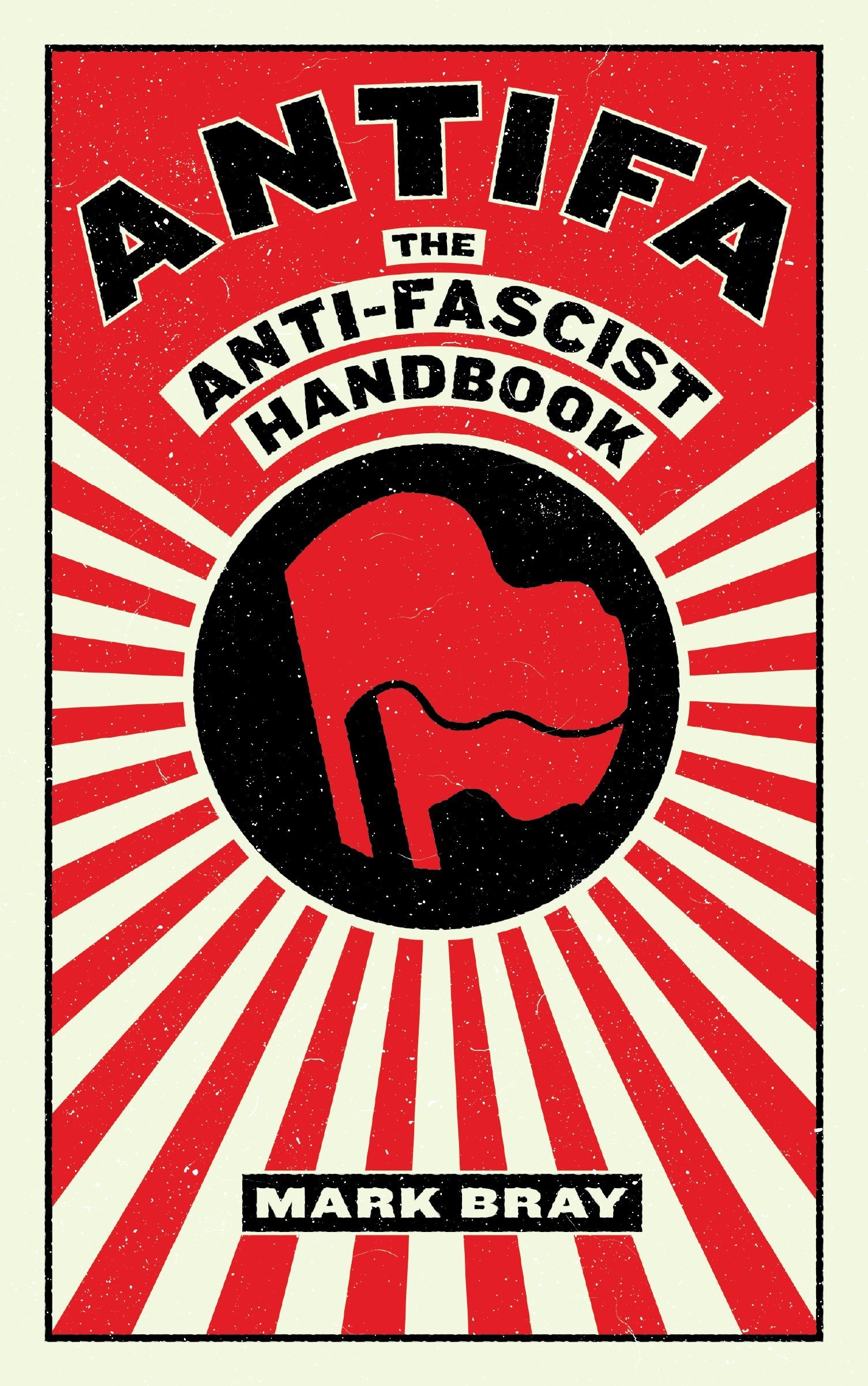 The Daily Beast’s coverage of the bill lovingly quotes Dartmouth lecturer Mark Bray’s defense of the group. However, this is self-refuting. Bray himself writes in his book Antifa: The Anti-Fascist Handbook:

Our goal should be that in twenty years those who voted for Trump are too uncomfortable to share that fact in public. We may not always be able to change someone’s beliefs, but we sure as hell can make it politically, socially, economically, and sometimes physically costly to articulate them.

Thus, by Bray’s own words, it’s not “Nazis” who need to fear masked extremists who feel entitled to take the law into their own hands—it’s half the country.

Letting a group like this operate isn’t just extreme, it’s a recipe for civil war.

Yet there is a theory of action behind Antifa organizing. The group’s ideology maintains certain kinds of speech and political organization are violent in and of themselves. As the definition of “racism” also seems to expand continuously, this means more and more people can be defined as aggressors.

After all, though I’m not very old, I’m old enough to remember when being “colorblind” was the very definition of anti-racism, rather than (as now) proof of racism.

Thus, today we are at a point where visible signs of support for the President of the United States will open you up to physical attack on the streets of just about any major city.

Of course, major outlets like The New York Times have already been paving the groundwork in recent years for peaceful political speech to be considered “violent” or “hate speech” and thus worthy of restriction. For example:

But once one grants the premise that “speech” can be “violence,” it necessarily follows that people should be able to defend themselves. Therefore, attacking people to engage in them is not aggression, but “community self-defense.” These kinds of MSM editorials and Op Ed articles make street violence inevitable.

Of course, logically speaking, right wingers could start operating this way under the same premises. After all, Communism killed more people in the 20th century than any other ideology. If we should “punch Nazis,” it follows that we should apply similar standards to Communists or anything that might potentially lead to Communism.

However, this never seems to come up. It is evidently morally superior to execute people because they are part of the wrong class than the wrong ethnic group.

But the solution is not for right wingers to start acting like Antifa; regardless of any ethical concerns, it simply wouldn’t work in today’s circumstances [Political violence is a game the right can’t win, by David Hines, Jacobite, June 14, 2018]. The solution is for the GOP to begin defending freedom of expression for everyone. The only alternative is violent conflict.

As with immigration, this doesn’t just mean pushing for new legislative tools but for enforcing the laws already on the books. As it stands today, this isn’t happening. Most of those charged with various offenses from the Inauguration Day riots were let off the hook. One of the key ways this was done was by the judge ruling that the terms “Antifa” and “black bloc” were not allowed to be used by prosecutors and witnesses, even though these are the terms the movement uses itself.

And the MSM continues to champion even the most indefensible actions. In April 2017, Eric Clanton, a college professor, was caught on video smashing a man on the head with a bike lock in an apparently unprovoked attack.

He was masked and quickly ran back into the ground after delivering what could have been a deadly blow. He was only caught after anonymous Internet users on /pol did the job Berkeley police just won’t do and hunted him doing using photographic and video evidence.

Rolling Stone, no stranger to both making things up and to romanticizing anti-American terrorism, penned a sympathetic piece about Clanton’s plight in response. One key excerpt:

We had spent much of the weekend going back and forth about using nonviolence to confront the right. Clanton had been adamant: Showing up unarmed and unprepared to protest people who were willing to hurt others was simply too risky. While peaceful demonstration might serve to dispel Antifa’s critics, Clanton says he isn’t interested in giving up his safety, or that of his friends, to seize the moral high ground, which he dismisses as a notion created by the “narrative class.” Nor does he put much stock in the right’s high-minded assertion that it’s fighting for free speech. “Was [Yiannopoulos coming to Berkeley] defensible in terms of free speech? It is an open question,” he says. “But what is not defensible is outing undocumented students in a way that, if not directly advocating, suggests or sort of incites violence against them.” Lou [another Antifa] is more direct: “Free speech is being used to [cover for] a very violent message. What they’re trying to protect is hate speech and calls for genocide.”

[Antifa on Trial: How a College Professor Joined the Left’s Radical Ranks, by Alan Feuer, Rolling Stone, May 15, 2018]

When harmless political performance artists like Milo Yiannopoulos are equated with people calling for “genocide,” Leftists have lost the plot. Rolling Stone’s Feuer accuses the Right of “wielding free-speech rhetoric as a cudgel,” something evidently more offensive than wielding actual cudgels.

In this climate, one can’t be surprised if Professor Clanton somehow ends up being let go. After all, Deandre Harris, the black man literally caught on video hitting a man with a flashlight at Charlottesville’s Unite The Right protest last August, was let off by a judge.

Meanwhile, many Unite The Right participants, who simply wanted to hold a legally-sanctioned rally, are still ensnared in a civil lawsuit alleging they engaged in a deliberate “conspiracy” to harm nonwhites [Judge allows federal lawsuit against neo-Nazis to proceed for violence in Charlottesville, by Tess Owen, Vice, July 9, 2018]. This is incredible considering that an independent report basically proved that there really was a conspiracy by state and local officials to create violence at the rally by refusing to separate the different sides and in some cases, literally pushing combatants together.

Needless to say, given that patriots do not enjoy unlimited financial resources, free legal help, and a sympathetic press, it is unlikely Antifa and the government officials who quite openly organized to commit or permit violence will ever be held accountable.

Some Republicans are still screaming about the need to further investigate Hillary Clinton’s emails. They’d be better served by calling for a federal investigation about what the Commonwealth of Virginia and the city of Charlottesville did last August—and the emerging pattern of Totalitarian Leftist repression across the country. While radical groups like the Democratic Socialists of America quite openly take over the Democrat Party, supporters of the President of the United States’ immigration agenda can’t even hold a meeting at a private location in this country.

While the Left is becoming more militant tactically and ideologically, Congressional Republicans are still mostly stuck in the past with endless Watergate-style investigative reruns.

The rise of an American Totalitarian Left is a new issue. But, as a well-known Republican once said, “As our case is new, so we must think anew, and act anew.” The First Amendment is now under threat. If Republicans, with total control of the entire federal government cannot recognize this and figure out how to protect free debate—or if they are really too afraid of the MSM/ Democrat howling—one has to wonder what is the point of them at all.