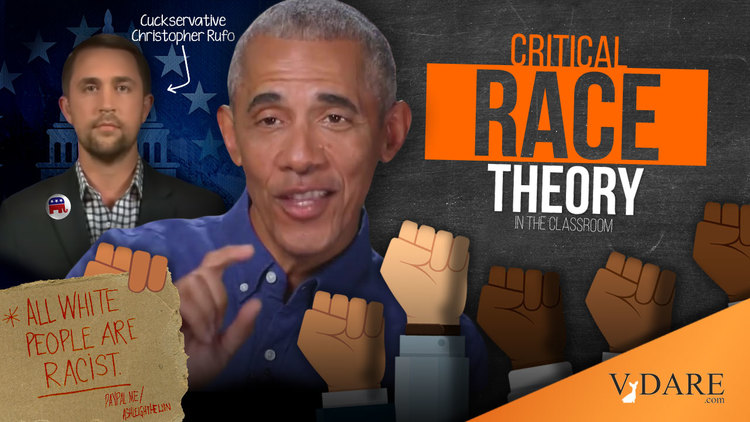 Base Dragging GOP, Conservatism Inc. Into Fight Against Critical Race Theory—But They Still Flinch From Calling It Anti-White Racism

Barack Obama claims he can’t believe Republicans have attacked Critical Race Theory, and dismisses their alarm as nothing more than “resentment” over the demographic dispossession of whites. “Lo and behold the single most important issue to [Republicans] apparently right now is Critical Race Theory,” he told CNN’s Anderson Cooper. “Who knew that was the threat to our Republic?” [Obama Says His Daughters Think Cancel Culture Goes Too Far, by Rachel Sharp, Daily Mail, June 7, 2021]. Yet Obama’s feigned innocence suggests that he knows Democrats have overplayed their hand, and that the GOP/GAP has blundered on to something. However, it will have to find the courage to follow the incisive recent advice of REVOLVER’s anonymous editorialist:

“The nature of America’s new extremism wave requires the right to be honest and frank about what it is. It’s not ‘socialism,’ or ‘Marxism,’ or ‘liberal fascism.’ In 2021, America is facing a steadily-growing amount of anti-white racism” America’s Rotten Academic Establishment Vomits Out More Demented Anti-White Rhetoric, June 12, 2021 Still, the GOP is fighting back. Florida banned CRT from its schools and specifically excluded the anti-white—and historically flawed—1619 Project from curricula. Florida Gov. Ron DeSantis dubbed CRT “state-sanctioned racism” and said it would only produce divisions [Florida bans critical race theory amid a wave of conservative backlash against the legal framework, by Erin Snodgrass, Insider, June 10, 2021]. Arkansas, Idaho, Oklahoma, and Tennessee have also banned CRT in schools. Similar bills await the governor’s signature in Iowa, Kentucky, New Hampshire, and Texas. Lawmakers in other states have also proposed measures to block this anti-white menace [The states taking steps to ban critical race theory, by Anuli Ononye and Jackson Walker, The Hill, June 9, 2021].

Republican legislators also want to take on CRT in government, particularly the military-industrial complex. They have demanded answers on mandatory diversity training at West Point and want to know why a Space Force commander was removed for criticizing CRT.

And it’s not just all talk from congressional Republicans. At least 30 support a bill to ban CRT from the military. Cotton proposed legislation to eliminate this practice from all military academies. Trump did ban it, but Biden rescinded Trump’s order [Republicans announce federal bills to 'restrict the spread' of critical race theory, by Char Adams, NBC News, May 12, 2021].

All this is happening because the base is fighting back. Parents in safely Democratic Loudoun County, VA, are fighting tooth and nail against a new school “equity” plan that would teach white kids to hate themselves and demonize America’s past. The system also would drop basic standards for admissions to competitive magnet schools because the NAACP complained not enough blacks were being accepted .An Leftist “anti-racist” vigilante coalition formed with the intention of doxing and harassing all parents who opposed the plan, but the parents weren’t intimidated [In wealthy Loudoun County, Virginia, parents face threats in battle over equity in schools, by Tyler Kingkade, NBC News, June 1, 2021]. The anti-CRT effort is even drawing support from some Asian parents, who see the poisonous education doctrine as equivalent to Maoism.

And a few smart Republicans have turned it into a winning issue in school board elections. A conservative slate of candidates handily unseated a Woke school board in a Dallas suburb in April. The slate campaigned explicitly against the board’s anti-white, anti-American diversity program.

Conservative journalist/activist Ryan Girdusky hopes to replicate this success around the country with his 1776 Project. The project, which appears to be well-funded and well-promoted, aims to replace CRT-supporting school board members with conservatives [New PAC Will Support School Board Candidates That Aim To Rid Public Schools Of Critical Race Theory, by Marlo Safi, Daily Caller, May 25, 2021].

GOP lawmakers see angry parents at school board meetings. They follow the social media chatter. Conservativism Inc. media focus on it because it is, in a positive sense, click bait. Readers love it. So the party is only responding to voters—a welcome change from their past treachery.

But, again, the Respectable Right’s hesitations might undermine its strategy. Many Conservativism Inc. CRT critics shrink from acknowledging that it is simply anti-white racism. Thus reporter Christopher Rufo, as Revolver reported, has done “heroic work” exposing CRT in schools, corporations, and government agencies. But Rufo and his ilk dance around its true nature.

That’s OK, if a bit too enmeshed in academic jargon. But confronted with its anti-whiteness, Rufo flinches. When Leftist Marc Lamont Hill befuddled him by asking what he liked about being white during an interview, Rufo stumbled, then tweeted this:

Critical race theory is explicitly anti-white ... but it is also anti-Asian, anti-rational, and anti-democratic. I think it is [a] much deeper problem—’anti-whiteness’ is merely one element.

Sure, critical race theory is explicitly anti-white (in the clip, I reference Ignatiev's campaign to "abolish the white race"), but it is also anti-Asian, anti-rational, and anti-democratic. I think it is much deeper problem—"anti-whiteness" is merely one element.

Rufo essentially argued that race doesn’t exist, a favorite of Conservatism, Inc. And along with many other cuckservatives, he promotes the cringe idea that CRT is bad because it harms non-whites.

That truth surfaced recently when an interracial couple became the face of a nationwide anti-CRT effort. The couple—white husband, black wife—claimed the teachings concomitantly glorify and harm non-whites. “We believe that it hurts our black and brown community that the message is: ‘You’re a victim. You can never make it until we tear down all these systems and structures,’” Martin Kokoszka, the white husband, told Fox News [Interracial couple says critical race theory ‘hurts’ people of color, by David Meyer, New York Post, June 6, 2021].

But what about the message that whites are inherently evil? Apparently that’s less harmful than telling blacks they’re “victims.”

Conservatives celebrated a similar message from a black mother in Florida. She too attacked CRT as racist toward blacks. “[T]elling my child or any child that they are in a permanent oppressed status in America because they are Black is racist—and saying that White people are automatically above me, my children, or any child is racist as well,” she told a school board [Black mother slams critical race theory at Florida school board meeting, by Sam Dorman, Fox News, June 11, 2021].

The Respectable Right’s proposed alternatives to CRT leave much to be desired. Rufo in his May 6 New York Post article advocated a return to the principles of Martin Luther King, which is no solution at all. Martin Luther King would support CRT if he were alive. His crypto-Leftist movement was an ancestor to Black Lives Matter.

Many conservatives point to Trump’s 1776 Commission as an alternative. That’s another dead-end. The 1776 Commission asserted that America is just an idea, that white Southerners invented minority identity politics, that America was founded by mere individuals and not a distinct people, and that Martin Luther King presents a blueprint for how to teach race.

You’ve heard that one a million times: Judge a man by the content … blah, blah, blah. The 1776 Commission merely reprises 1990s liberalism. But that’s pretty much all that Con Inc. can suggest [Trump’s Cornball American History, by Robert Hampton, Counter-Currents, January 22, 2021].

The term Critical Race Theory itself is problematic. Leftist bureaucrats and educators can innocently say they only promote “diversity and inclusion.” Defense Secretary Austin did just that in sparring with Cotton. It’s only “diversity training,“ he said of the military’s anti-white programs. Those claims give the Left wiggle room to impose anti-white indoctrination. We’re all supposed to love diversity, equity and inclusion.

Conservative critics could avoid these problems by calling CRT what it is, which would make obscuring what CRT’s promoters are doing in classrooms and boardrooms more difficult. The so-called training tells whites they’re evil, and must check their privilege. That’s outright anti-white racism.

It’s great to see Republican officials and conservative Establishment types being dragged into the fight against this menace, but they need to hit harder. Repeat after me: CRT isn’t just racism; it’s anti-white racism.

And one more thing: Our schools must focus on the Historic American Nation and acknowledge who founded this country—not peddle the platitudes about a philanderer, Communist sympathizer, and accomplice to rape.

The base is awakening to anti-white racism. All the GOP leadership must do is speak the monster’s name.