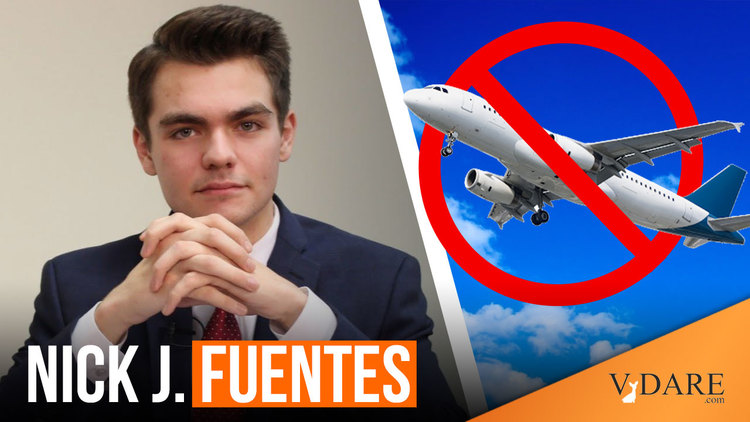 Previously: Will Whites Support A Globalist American Empire That Picks Fights Abroad And Wars Against Them At Home?

Everyone knew the Biden Regime would use the January 6 Mostly Peaceful Protest as an excuse to crack down on patriotic Americans and Trump supporters. But news reports through the past two weeks demonstrate just what Biden and his Leftist allies on Capitol Hill, Big Tech, and the Regime Media have in mind: A major surveillance operation involving not only the usual federal alphabet agencies but also private informers to designate dissidents as “terrorists” and “white supremacists;” and co-opting the private sector to punish them—as in putting America First Nicholas Fuentes on the no-fly list.

The Department of Homeland Security is limited in how it can monitor citizens online without justification and is banned from activities like assuming false identities to gain access to private messaging apps used by extremist groups such as the Proud Boys or Oath Keepers.

The plan being discussed inside DHS, according to multiple sources, would, in effect, allow the department to circumvent those limits. A source familiar with the effort said it is not about decrypting data but rather using outside entities who can legally access these private groups to gather large amounts of information that could help DHS identify key narratives as they emerge.

It’s a good guess the “outside entities” will likely be the CultMarx vigilantes already tracking such “extremists.”

Fuentes only learned  he was on the no-fly list last week when multiple airlines barred him under orders from the Transportation Security Administration. Fuentes is not charged with any crimes and he is certainly no terrorist. But he is a nationalist and backed the protest in Washington, D.C., on January 6. He says things the Regime doesn’t want said.

And Fuentes is only one of many patriots under the heel of the globalist regime. The day after Fuentes learned he can’t fly, FBI agents raided the home of a Trump-supporting couple in Alaska. The agency mistakenly identified the wife as someone who had stolen Nancy Pelosi’s laptop when protesters stormed the Capitol on January 6 [Homer Residence Raided By FBI Wednesday, by Anthony Moore, KSRM, April 29 2021]. While both husband and wife attended the rally, neither entered the building, but agents did enter their home. They had guns drawn and refused to show warrants for hours. They also threatened her for obstruction of justice for refusing to confess that she was the laptop thief.

The home of Paul and Marilyn Hueper, the owners of the Homer Inn and Spa, was raided by FBI agents on Wednesday, April 28th. Through... - https://t.co/w4XaEu60Zl pic.twitter.com/Rb7ReXoowr 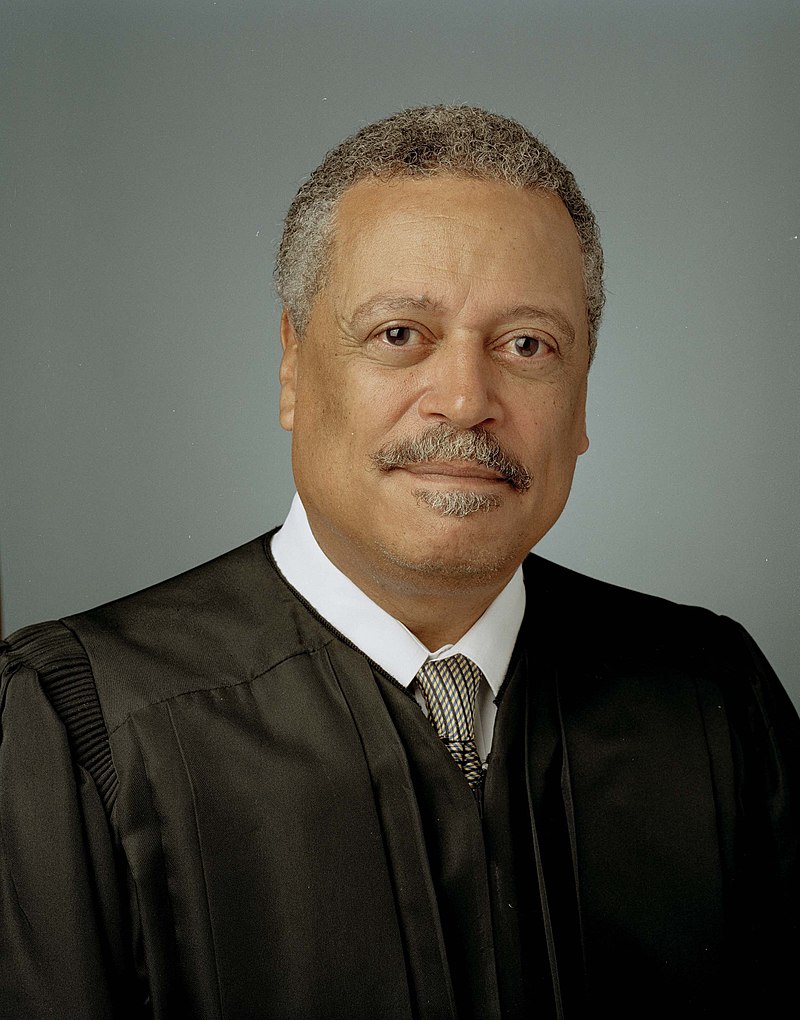 Similarly, authorities have jailed several Capitol protesters indefinitely and without bail essentially because of their political beliefs [Indefinite Incarceration for Protesters With ‘Wrong’ Politics, by Julie Kelly, American Greatness, April 12, 2021]. Federal judge Emmet G. Sullivan, right, a Clinton appointee who has ruled in favor of illegal aliens and against Trump in lawsuits, refused bail to an arrested protester because Donald Trump continues to cast doubt on the 2020 election results [Judge denies bond for Ga. man accused in Jan. 6 assault, by Chris Joyner, Atlanta Journal-Constitution, April 21, 2021]. The judge said the former president’s comments “reflect the continued threat posed” by the protesters.

Federal authorities red-flagged and interrogated Dana Kurtbek, an ordinary Trump supporter, when she tried to fly weeks after January 6. Authorities claim she entered the Capitol, but like the couple in Alaska, she had merely attended Trump’s speech that day [Trump supporter flagged with facial recognition technology at airport, interrogated by DHS, FBI, by Mia Cathell, Post Millennial, February 2, 2021]. Apparently, that’s all it takes to be considered a terrorist.

These aren’t mistakes or minor hiccups. They are the result of Biden’s obsession with the “worst attack on our democracy since the Civil War,” as he falsely called the events at the Capitol during his recent speech to Congress.

And we won’t ignore what our intelligence agencies have determined to be the most lethal terrorist threat to the homeland today: White supremacy is terrorism.  We’re not going to ignore that either.

[Remarks by President Biden in Address to a Joint Session of Congress, WhiteHouse.gov, April 29, 2021]

That’s particularly ominous given that Biden said it right after he declared that America would pull back from Afghanistan so it could focus on the real threat—by which he means conservative whites. Biden essentially said he would use the machine created by the War on Terror against his own people. Or should we say Trump’s people?

We also learned last week that the FBI sifted through NSA’s stored communications to spy on domestic “racially-motivated violent extremists,” meaning “white nationalists.” The agency vacuumed those data without a warrant and in direct violation of a court order—and they’re still doing it! Yet this brazen violation of the law has not, apparently, invited sanctions or punishment [Secret Court Reveals: FBI Hunted for Domestic Terrorists Without a Warrant, by Spencer Ackerman, Daily Beast, April 26, 2021].

Even the U.S. Postal Service is in on the game. Its Internet Covert Operations Program (iCOP) targets right-wing accounts on Twitter, Facebook, and Parler and was used to keep an eye on peaceful protesters involved in the right-leaning World-Wide Rally for Freedom and Democracy in March.

Additionally, the Department of Homeland Security is adding more resources to its programs. “We know that this [domestic terror] threat is fueled mainly by false narratives, conspiracy theories and extremist rhetoric read through social media and other online platforms,” a DHS official is quoted as saying. “And that's why we're kicking off engagement directly with social media companies.” [The Postal Service is running a ‘covert operations program’ that monitors Americans' social media posts, Yahoo! News, April 21, 2021].

And of course the Covid “pandemic” was another excuse to ratchet up government surveillance. The “COVID Hate Crimes Act” will allow the government to spy even more. Yet only one senator—Josh Hawley—voted against it. “My big problem with Sen [Mazie] Hirono’s bill that Senate voted on today is that it turns the federal government into the speech police – gives government sweeping authority to decide what counts as offensive speech and then monitor it,” Hawley tweeted [Josh Hawley Explains Why He Was Sole Vote Against Anti-Asian Hate Crime Bill, by Darragh Roche, Newsweek, April 23, 2021].

My big problem with Sen Hirono’s bill that Senate voted on today is that it turns the federal government into the speech police - gives government sweeping authority to decide what counts as offensive speech and then monitor it. Raises big free speech questions

And no, they don’t mean that America inadvertently backs Islamic terror groups. They mean ordinary Americans are radicalizing the world with “extremist” rhetoric.

And no American who dissents from globalist ideology will be safe if Senate Majority Leader Chuck Schumer gets his way. He has introduced a resolution that demands the FBI uncover the membership of right-wing groups and prioritize their prosecution. A House bill would authorize similar spying [Dems’ domestic-terror bills set their sights on peaceful right-wingers, by Betsy McCaughey, New York Post, April 23, 2021].

Lawmakers also want to monitor conservative veterans for possible “extremist” ties. The military vows to purge its ranks of any suspected “white nationalists,” but Leftists see that as insufficient. They want to keep any eye on anyone who served in the military. Some, such as the $PLC’s Heidi Beirich, want veterans with the wrong politics to lose benefits [Post-Riot Effort to Tackle Extremism in the Military Largely Overlooks Veterans, by Paul Sonne et al., Washington Post, April 20, 2021].

Remember, all this is directed only at the political Right. Antifa, Black Lives Matter, and other left-wing domestic terrorists need not worry. Federal officials don’t view the Left as a problem, even though Antifa has laid siege to the Pacific Northwest for nearly a year. As Attorney General Merrick Garland made clear in his confirmation hearing, these officials don’t consider Antifa’s attacks on federal buildings on terrorism. That is why federal prosecutors invariably drop charges against the Leftist hoodlums [Almost Half of Federal Cases Against Portland Rioters Have Been Dismissed, by Aruna Viswanatha and Sadie Gurman, Wall Street Journal, April 15, 2021].

The authorities don’t even count assassination attempts against Republican congressmen as terrorism. Only in April did we learn that the FBI labelled the shooting of GOP congressman at a baseball practice “suicide by cop.” It couldn’t have been terrorism; the culprit was a Leftist. The FBI refused to reclassify the shooting after Republican lawmakers protested [FBI defends ‘suicide by cop’ designation for 2017 baseball field shooting, by Kyle Cheney, Politico, April 29, 2021].

Only one thing explains the bias: the Biden Regime sees Leftist terrorists as useful allies in its war against the historic American nation.

Thought crimes should not get people on the no-fly list, as Dem Chairman of Homeland Security Bernie Thompson suggested about Sen. Josh Hawley.

Are we really a better, stronger nation if access to air travel is the next frontier of cancel culture? https://t.co/WxkByPPlsb

But never forget something: Republicans played an instrumental role in building the modern security state. They supported the Patriot Act and cheered NSA surveillance. They cheered as Bush 43 used 9/11 and the “war on terror” to expand the surveillance power of the government. Now that war machine is turned against their own voters instead of foreign terrorists. It was even used against Trump, a target of FBI surveillance and disinformation.

It’s time for the GOP to repent and fight to downsize the monster it helped create. That monster is now directed against the party’s own constituents. Republicans must oppose any new domestic terror legislation, demand hearings and answers on domestic spying, support bills such as Gaetz’s, and debunk the lies about January 6 and “white supremacist” domestic terrorism.

The security state no longer defends America. It’s a direct threat to the Historic American Nation. The Generic American Party must act accordingly.

Censorship footnote: as we go to pixel, there has been not one Regime Media report on Nick Fuentes’ Travel Ban. Nor has it been mentioned in Respectable Right mouthpieces like National Cuckview, the Daily Cucker, or Cuckbart.