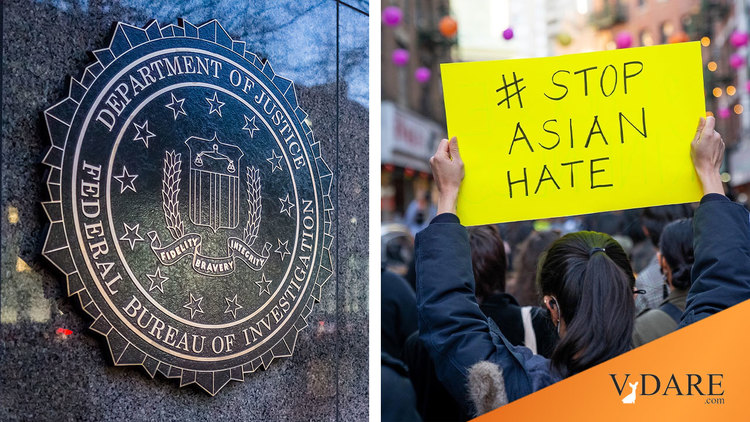 Blacks TWICE As Likely As Whites To Commit "Hate Crimes," But Regime Media Won't Tell You (And FBI Suppresses Details)

Earlier: How To Write About Black-on-Asian Violence In The NYT: Blame Whites

An article in yesterday’s Washington Post warns that hate crimes are one the rise:

The number of hate crimes in the United States rose in 2020 to the highest level in 12 years, propelled by increasing assaults targeting Black and Asian victims, the FBI reported Monday.

In all, the federal agency tallied 7,759 hate crimes last year, a tumultuous 12 months marked by a global pandemic, a divisive presidential election and upheaval in the economy.

And you should worry: “The total marked an increase of six percent from 2019 and the most since 2008, when 7,783 hate crimes were reported. . . . The number of hate crimes reported has increased by nearly 42 percent since 2014, according to federal data.”

Attacks targeting Blacks rose from 1,930 to 2,755, and the number targeting Asians jumped from 158 to 274, the data showed. Those figures come as civil rights groups have warned of increasing hostility toward minorities amid a rise in white nationalism and an increase in violent crime nationwide.

Before you brace yourself for this rise in white nationalism and increasing hostility toward minorities, let’s put these numbers into perspective. The Department of Justice warns every year not to make year-to-year comparisons of the number of “hate” crimes, and every year, the media make them anyway.

Comparisons are meaningless because data come from local police agencies, which can file reports or not as they choose.

There are 17,985 police agencies in the United States, and 2,849 did not bother to file a hate-crimes report in 2020. Sixty-four jurisdictions with populations greater than 100,000 that did file found no hate crimes at all.

Departments are inconsistent. In March, Robert Long killed eight people—six of them Asians—at massage parlors in two different counties in Georgia. In Cherokee County, the prosecutor found no anti-Asian bias and did not file hate-crime charges. Fulton County did claim to have detected bias, and will add hate-crime charges. Asians just knew it was hate and demanded hate-crime charges.

The FBI has ordered local police to beat the bushes for hate crimes that it knows must be out there. In July, Associate Attorney General Vanita Gupta, number-three in the department and in charge of civil rights, told several hundred FBI and other police brass to “approach each and every law enforcement agency in your district that reports zero hate crimes or does not participate in hate crimes reporting to learn what’s going on and why that’s happening.” [EXCLUSIVE: Part 4: FBI begins Summer, Fall of anti-hate initiatives, by Mark Albert, ABC40/29, July 28, 2021]

All 35,000 FBI agents will get special training this year in how to sniff out hate, and the DOJ will begin “a nationwide anti-hate, multi-media advertising campaign” to persuade victims to call the police. The pressure is on, so we will probably see more “hate crimes” with, needless to say, emphasis on white perps.

It is therefore amusing to note that in 1997, at a time when far fewer police agencies (11,211 vs 15,136 in 2020) were reporting and population growth had yet to add another 58.5 million potential hate-criminals, the FBI tracked down 9,861 hate crimes, or 1,602 more than the 7,752 in 2020 that we are supposed to be fretting about. This was also before the discovery of several new types of hate crimes unknown in 1997 (anti-transexual, anti-male, anti-female, anti-gender-nonconforming) that added 307 cases to the 2020 tally. And it was long before Donald Trump or Black Lives Matter, and 24 years before Merrick Garland discovered that white supremacists are the country’s top domestic terror threat.

So, with the understanding that these numbers don’t mean much, let’s look at them anyway. The Post laments a 40 percent increase in anti-black incidents and a 70 percent increase in anti-Asian incidents, but is silent about drops in certain kinds of “hate:” Anti-Arab, down 26 percent (93 incidents to 69), and anti-Muslim, down 42 percent (180 to 104), and anti-mental disability, down a full 54 percent (98 to 45). Shouldn’t we be celebrating?

The Post did reluctantly note that anti-Jew hate is down 30 percent (963 to 676), but hastened to add that the Anti-Defamation League says this is a ludicrous undercount; the ADL, which is no doubt in a position to be objective, says anti-Semitic hate is at “a historic high,” with 2,024 incidents.

Asian activists likewise scoff at the FBI’s figure of 274 anti-Asian incidents. Something called Stop AAPI Hate catalogued no fewer than 6,603 anti-Asian hate crimes during the year ending in March 2021. 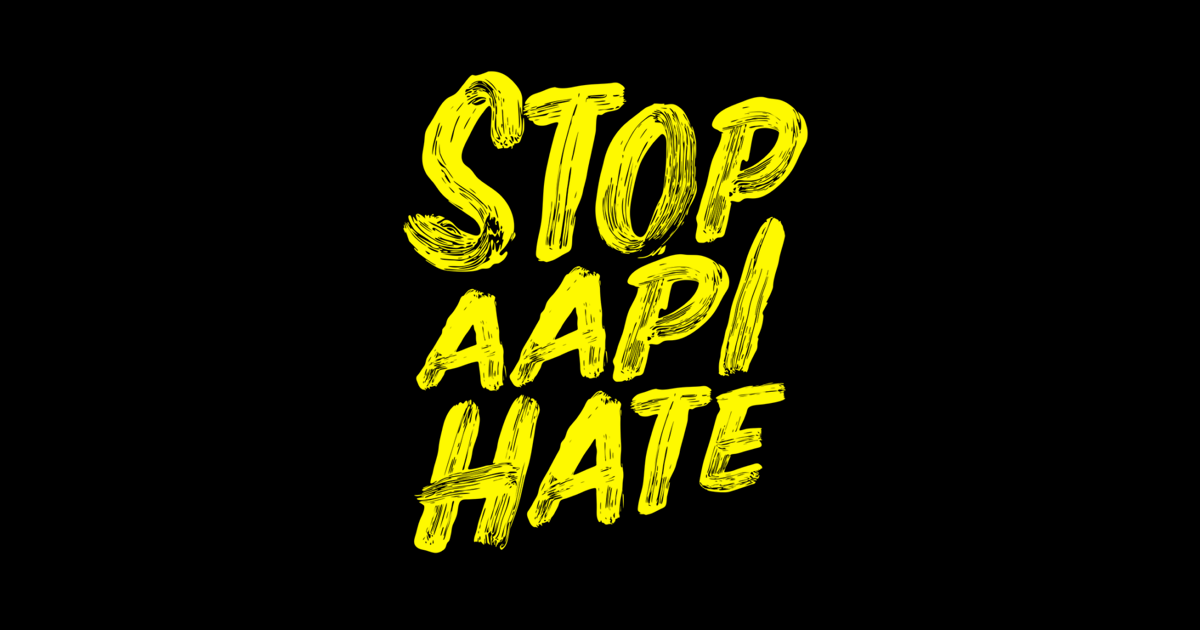 Expect more anti-Asian hate. In May, huge majorities in both houses passed a new law to dig up more of it. It appointed an Asian-hate czar, and funded a campaign in exotic languages to encourage Asians to complain.

Deep into its story, the Post did note that there were 773 anti-white incidents, saying this was an increase of 16 percent over the previous year. Author David Nakamura [Tweet him] bungled the math; it was actually a 20.2 percent increase, but who cares about that?

The FBI reported a total of 10,952 acts of criminal hate (a single incident can include several acts). Sixty percent of those 10,952 were nothing more than “intimidation” or vandalism/property destruction. However, there were 1,359 aggravated assaults, 130 robberies, 68 cases of arson, 22 murders, and 19 rapes (including sodomy and sexual assault with an object) reportedly motivated by “hate.” The 2020 report gives a racial breakdown of perps for total hate crimes, but not for each crime—as it did for 2019. The agency must therefore know who committed hate-crime rape, murder, and arson in 2020, but it’s not telling. Violent crime is a black specialty, so blacks are probably vastly overrepresented as perpetrators, just as they were the year before. For example, among perps identified by race in 2019, blacks committed 53 percent of the hate rapes, 31 percent of the aggravated assaults, and 62 percent of the robberies.

What do we know about this year’s perps? The FBI reports that there were 6,576 known offenders, which means about one in every 50,000 people. By comparison, 10,085,210 people were arrested in 2019 for non-hate crimes, or about one person in 33. The media are happy to report that 71 percent of these 6,576 haters were white but, as usual, Hispanics were thrown in with whites, inflating the “white” figure. Hispanic identity—known as “ethnicity”—is reported separately as follows:

Therefore, 627 “white” perps were definitely Hispanic, and 2,321 were definitely not, but even more (3,474) were mystery perps, and 154 were “mixed,” whatever that means. What is a realistic figure for the racial mix of hate criminals? If we stick with the most conservative figure of 627 Hispanic haters and set aside perps whose race the FBI does not identity, there were 5,118 criminal haters whose race was known:

Unlike year-to-year changes in the number of hate crimes, which the FBI correctly warns us are meaningless, we can now calculate something that may mean something. The right-most column is the rate at which people of different races commit hate crimes, expressed as a multiple of the white rate. For example, since blacks are 13 percent of the population but commit 25.6 percent of the hate crimes, it means they are 2.15 times more likely than whites (60.1 percent of the population and 58.7 percent of perps) to commit criminal “hate.” Hispanics (assuming there wasn’t a single Hispanic among the 3,474 perps whose “ethnicity” was mixed or not reported) and Asians are less likely than whites to commit hate crimes. (Please note that each additional Hispanic perp would be subtracted from the total for white perps, thus raising the “white multiple” for every other race.)

American Indians and Eskimos were twice as likely and Hawaiians and Pacific Islanders were three times as likely as whites to be hate criminals, but these multiples don’t mean much because the numbers of offenders are small.

No mainstream publication anywhere and very few dissident ones will report that, according to official FBI statistics, blacks are twice as likely as whites to commit hate crimes, and that this is consistent, year to year. Political and media elites can hardly even conceive of blacks as hate criminals. If police were ordered to look for racial bias in non-white-on-white crimes—of which there are vastly more than white-on-non-white crimes—they would surely find a lot of it.

Needless to say, whites do not have organized lobbies calling attention to anti-white hate the authorities may be ignoring. And if there were such lobbies, the authorities would ignore them.

Jared Taylor [Email him] is the editor of American Renaissance. You can follow him on Parler and Gab.