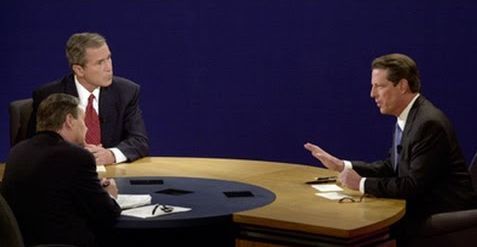 Bore vs. Gush on Racial Profiling

Something that was said during the October 11 Bush-Gore Debate II struck me profoundly.

Well, actually, that's a bald-faced lie. Barely anything either candidate said during the entire debate has even lodged in my memory.

But Peter Brimelow insisted I read what the two candidates had to say about racial profiling. And here are excerpts from their scintillating slam-bang exchange:

Tweedledee: "Because, imagine what it, what it is like for someone to be singled out unfairly, unjustly and feel the unfair force of law simply because of race or ethnicity."

Tweedledum: "I can't imagine what it would be like to be singled out because of race and stopped and harassed."

This debate over racial profiling shows how utterly divorced American political discourse has become from personal reality. Every single person who lives in a diverse part of the country racially profiles every other pedestrian as he walks down the street at night. Jesse Jackson notoriously admitted that he does exactly that – and sighs with relief when he finds that the footsteps following him don't belong to a young black male.

The reason we all do this is simple: African Americans commit far more violent crimes than anybody else. For example, according to official Clinton Administration statistics, in 1998 on a per capita basis blacks were seven times more murderous than whites. And this ratio is down significantly from the early nineties when the black crack wars were blazing. [http://www.ojp.usdoj.gov/bjs/homicide/race.htm]

Indeed, the black-white ratio would be even higher if the FBI didn't insist upon counting most Hispanics as whites. This obfuscatory tactic makes it hard to break out precise crime figures for Hispanic groups. Most estimates place their rates of violence as well below those of African Americans – but well above those of whites. For example, Fox Butterfield reported in The New York Times on August 10, 2000 that Hispanics are imprisoned at a rate three times higher than "Anglo" whites.

Actually, now I come to think about it, I do recall meeting one (1) man who never engaged in racial profiling. At a wedding reception in 1985, I got to talking with someone from Grant's Pass, Oregon. He was most upset by how whites (other than himself) worried more about black muggers than muggers of other races. "That's pure racism!" he insisted.

I proposed to him a thought experiment. Say your wife's car runs out of gas in the middle of the night in a desolate neighborhood. She has no idea which way to walk to find a gas station. However, if she walks one way she has to pass by a half dozen black youths lounging on a corner. If she walks the other way, she would have to pass by a half dozen Indian immigrant youths. Which way would you prefer she went?

"I would be completely indifferent," he replied.

"Well, then, for your sake, I'm glad you live in Grass Pants, Oregon."

"Where I live is irrelevant!" he responded triumphantly. "I've already been mugged three times!"

I was quite defeated by his logic.

The plain fact is that cultural diversity and human biodiversity are decisive in predicting who will commit crimes. Men are an order of magnitude more likely to commit crimes than women. Old people and children commit enormously fewer than post-pubescents. Blacks are a couple of orders of magnitude more likely to commit violent crimes than Japanese Americans. Etc. etc.

Thus there are only two alternatives to "racial profiling."

In either case, the upshot will be the same: the long decline in crime rates, brought about by some fairly brutal in-your-face policing and a doubling of the number of jail inmates, is just about over. Thus the crime rate has already shot up in Los Angeles since the Ramparts "civil rights" scandal hamstrung the LAPD.

Whoever gets elected in November, the same "solution" is coming to your town.

[Steve Sailer [email him] is founder of the Human Biodiversity Institute and  movie critic for The American Conservative. His website www.iSteve.blogspot.com features his daily blog.]