Bush's Racial Profiling Guidelines Could Be Worse – And May Well Be

How bad are the new Bush Administration's racial profiling guidelines for federal agencies?

Well, we should be thankful for whatever sensible policies on race we can get from this Administration. So let's call the glass a little bit full - the guidelines could be worse.

They ban "stereotyping" of blacks and Hispanics (i.e., realism), but they don't seem directly to impose racial quotas for stops and searches by federal law enforcement officials – i.e. as many whites etc. as blacks would have to be searched. (Don't laugh - this was a real possibility.)

But remember, we've wound up with quotas before without anybody originally specifying them. So we shall see.

This says more about National Review's new, Beltway priorities than about the Bush guidelines. Over the last decade, about sixty times more Americans have died from normal crime than from terrorism.

And the fact remains that all this racial profiling hysteria is bunk.  I got racially profiled a lot last month by the U.S. Border Patrol. And I liked it.

I spent a few days hanging around the Arizona-Mexico border, talking to Border Patrol guards, and crossing into Mexico and back. Each time I ran into a federal agent, they'd initially be suspicious. But then they'd quickly turn friendly and helpful as my traits—6'-4" tall, blue-gray eyes, light brown hair, no accent—clicked into place against the profiles they carry in their heads, and the answer came up: He's almost certainly an American citizen.

They knew then they had better things to do with their limited time than hassle me.

Granted, there are Mexican nationals who look rather like me—for example, President Vicente Fox is even taller than I am. But those guys aren't trying to sneak into America. They like it just fine in Mexico because they, essentially, own it.

In contrast, at the Tucson airport the Transportation Security Administration put me through the usual wringer to make sure I wasn't an Al-Qaeda terrorist.

The airlines are going bankrupt as Americans increasingly decide that air travel isn't worth the inconvenience. But at least TSA isn't racially profiling!

The ritual horror that greets the term "racial profiling" these days is actually testimony to the impressive progress in controlling crime since the anarchic early 1990s. According to the FBI, the number of homicides in America fell from 24,700 in 1991 to 15,517 in 2000. That's over 9,000 lives saved - or the equivalent of three 9-11's that don't happen each year. There are a lot of reasons for this, but aggressive Giuliani-style policing that has put a huge number more bad guys behind bars is a big one.

Now that crime is down, however, our elites feel they can afford the luxury of demagoguing against "racial profiling."

But there are still five 9-11's worth of people being murdered each year. And that could easily go back up to the pre-crackdown rate if the cops are constrained.

Simply put, the police can use either of two alternative strategies:

They can sit around eating donuts and wait for bad guys to commit crimes.

Or they can get in the face of potential bad guys and prevent crimes.

To do the latter, though, they have to use the brains God gave them to figure out who is more likely to cause trouble.

And that's when they get blamed for profiling.

The simple truth is that sex, age, and, yes, race/ethnicity all are closely correlated with a propensity to break the law. Today, it's not too controversial to point out that males and the young are more murderous. But the enormous race difference is heavily censored. According to the U.S. Department of Justice:

"Approximately one-third of murder victims and almost half the offenders are under the age of 25. For both victims and offenders, the rate per 100,000 peaks in the 18-24 year-old age group."

In other words, for homicides, the racial ratio is just as large (8X) as the sex ratio, and race seems more important than age.

In fact, race gap is actually a little worse than that. Government numbers lump almost all Hispanics in with whites. So the ratio of blacks to non-Hispanic whites is even higher. A liberal advocacy group recently extracted the Hispanics from the data and came up with these ratios for imprisonment:


They didn't report the Asians vs. non-Hispanic whites ratio, but it would be well under 1.0X.

American intellectual discourse has become so corrupted, however, that even mentioning these statistics is seen as racist. So the debate over racial profiling largely ignores the central reality of racial differences in propensity to commit crimes.

And a debate that is based on lies can come to no good end.

Ironically, Bush campaigned in 2000 against racial profiling - specifically against the profiling of Muslims and Arabs by airport check-in screeners!

Of course, this was because Karl Rove, certified genius, told him to. It was another one of Rove's minority outreach plans - this one in alliance with long time GOP lobbyist Grover Norquist.

Does the terrorist exemption in the new racial profiling guidelines mean the White House has given up on the Rove-Norquist Muslim strategy?

If so, I shudder to think what it would take the Administration to learn about the folly of the Rove-Hispanic strategy. 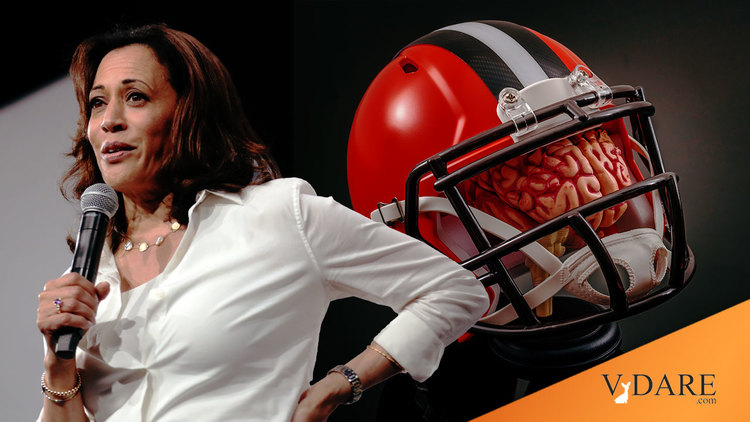