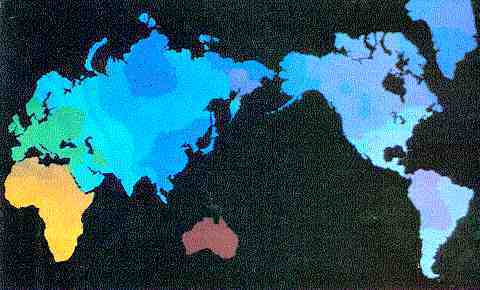 The New York Times has hailed Genes, Peoples, and Languages, the new book by Professor Luigi Luca Cavalli-Sforza the dean of population geneticists, for "dismantling the idea of race." In the New York Review of Books, Jared Diamond salutes Cavalli-Sforza for "demolishing scientists' attempts to classify human populations into races in the same way that they classify birds and other species into races" .

Cavalli-Sforza himself has written: "The classification into races has proved to be a futile exercise." He says his research is "expected to undermine the popular belief that there are clearly defined races, [and] to contribute to the elimination of racism."  He adds:  "The idea of race in the human species serves no purpose."

Don't believe any of this. It's merely a politically-correct smoke screen that Cavalli-Sforza regularly pumps out to keep his life's work — distinguishing the races of mankind and compiling their genealogies — from being defunded by the leftist mystagogues at Stanford.

What's striking is how the press falls for his squid ink - even though Cavalli-Sforza can't resist proudly putting this genetic map showing the main human races right on the cover of his magnum opus of 1994, The History and Geography of Human Genes. (Here's a link to website of molecular anthropologist Jonathan Marks, one of the few leftists acute enough to notice Cavalli-Sforza's sleight of hand: HGDP Map

This is Cavalli-Sforza's description of the map that is the capstone of his half century of labor in human genetics:

"The color map of the world shows very distinctly the differences that we know exist among the continents: Africans (yellow), Caucasoids (green), Mongoloids … (purple), and Australian Aborigines (red). The map does not show well the strong Caucasoid component in northern Africa, but it does show the unity of the other Caucasoids from Europe, and in West, South, and much of Central Asia."

Basically, all his number-crunching has produced a map that looks about like what you'd get if you gave an unreconstructed Strom Thurmond a paper napkin and a box of crayons and had him draw a racial map of the world.

In fact, at the global level, Cavalli-Sforza has largely confirmed the prejudices of the more worldly 19th Century imperialists. Rudyard Kipling, Cecil Rhodes, and Francis Galton could have hunkered down together and whipped up something rather like this map in honor of Queen Victoria's Diamond Jubilee.

Cavalli-Sforza's new book, Genes, Peoples, and Languages, is a surprisingly readable updating of a series of lectures on his work that he's been giving for years. It's not at all a bad introduction to this hugely productive scientist. But to find out just how politically unpopular Cavalli-Sforza's findings really are, you need to crack open his intimidating but endlessly fascinating landmark, The History and Geography of Human Genes. (The abridged version is all that you'd ever need; the $195 unabridged volume is for libraries only.) It remains the best summary of how the early humans of Africa split apart into the myriad racial groups we see today.

From these kind of tables, Cavalli-Sforza reached this general conclusion:

As you can imagine, this finding could get him in a bit of hot water if the campus thought police ever found out about it. So we should certainly forgive the charade he keeps up to fool the New York Times. But we definitely don't have to agree.

A race is simply a lineage. A racial group is simply an extremely extended family that inbreeds to some extent. Race is a fundamental aspect of the human condition. Burying our heads in the sand and refusing to think about this fundamental aspect only makes the inevitable problems caused by race harder to overcome.

[Steve Sailer [email him] is founder of the Human Biodiversity Institute and movie critic for The American Conservative. His websitewww.iSteve.blogspot.com features his daily blog.]