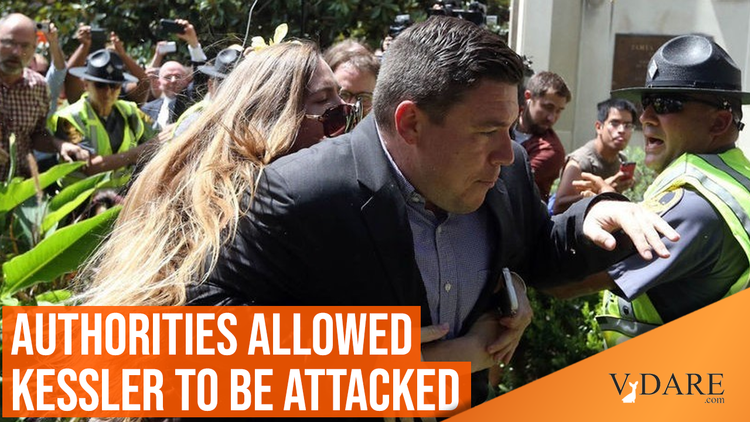 On August 13, 2017, Jason Kessler, above, attempted to hold a press conference on the subject of the rally. He was physically attacked at that conference, and local authorities neither defended him, nor punished the attackers.

“The Unite The Right rally was such a disaster because both organizers and attendees failed to anticipate that state and local officials wouldn’t protect the demonstration,” VDARE.com’s “Charlottesville Survivor” wrote last night on the third anniversary of the opening  evening torchlight procession. As an organizer, I sadly agree. Above all, unlike Antifa, we had no lawyer allies lined up. Three years to the day after the August 12, 2017 mugging of the actual UTR demonstration by Democrat officials and their Antifa goons,  the legal entrapment of patriots continues to play out and will come to a head in a major courtroom battle this fall.

Post-UTR litigation has taken three forms: (1) state prosecution of individuals accused of violence. In a now-familiar anarcho-tyrannical pattern, this has generally resulted in savage punishments for UTR participants and slaps on the wrist for the Left; (2) civil actions by Leftists against various UTR participants (and non-participants), the sort of lawfare that the U.S. legal system makes available to the well-financed; (3) my own suit against the city of Charlottesville for infringing the First Amendment rights of Unite the Right participants by allowing Antifa to conduct a violent Heckler’s Veto.

This civil case is a bit of an oddity since it was filed in Ohio by an attorney from Skokie, Illinois, home of the famous Nazi free speech case, although none of the incidents related to Unite the Right occurred there. Many defendants, including myself, were dropped from the lawsuit after the attorney failed to serve us with the lawsuit.

The case has already met with some limited success after negotiating a $5,000 settlement with former Louisiana state representative David Duke, possibly to avoid the costs of further litigation [David Duke agrees to pay $5K to man hurt at Virginia rally, by Andrew Welsh-Huggins, WAFB9, January 23, 2020].

More seriously, the case has become a big problem for Richard Spencer and his National Policy Institute. Spencer apparently failed to file any response to the allegations within the required time and his organization is now liable for a potentially multi-million dollar default judgment.

The most high-profile Unite the Right lawsuit is going to court at the end of October. It is staffed by some of the most politically connected law firms in the country and funded to the tune of $9 million by the likes of the ADL and Jeffrey Epstein confidant (and LinkedIn co-founder) Reid Hoffman [Reid Hoffman apologizes for his role in rehabbing Jeffrey Epstein’s public image, by Megan Hernbroth, Business Insider, September 12, 2019].

The executive director, Amy Spitalnick, is a former communications director for the New York attorney general and press secretary for the Israeli lobbying firm J Street. It is through her connections that the case and its outrageous allegations have received fawning treatment in the press, especially many outlets based in New York.

The director of research (another six-figure salaried full-time position) is Mary Mapes, a former Peabody Award-winning journalist who uncovered human rights abuses in Abu Ghraib ['60 Minutes II' Wins a Peabody Award, Raising Eyebrows, by David Carr, New York Times, April 8, 2005]. However, she was ultimately fired for producing another 60 Minutes item based on false information about the service record of George W Bush, in what is colloquially known as “Rathergate” [Four CBS Execs Fired Over Bush Memo Report, Forbes, January 10, 2005].

Some defendants, like League of the South, are hoping to knock out the claims in the lawsuit ahead of trial using a Motion for Summary Judgment to argue that there are no issues left in dispute and therefore no need for a trial.

At the heart of this claim (which you can read here) is that, despite an intrusive years’ long discovery process, there is still absolutely no evidence that James Fields, convicted in the death of Heather Heyer, conspired with any of the other defendants in the case. In fact, investigations by both the Charlottesville Police Department and the FBI have found the opposite.

This lawsuit I filed against the Charlottesville government was dismissed by Judge Norman Moon, a Clinton appointee, under controversial circumstances and is currently docketed for an appeal to the United States Court of Appeals to the Fourth Circuit.

The allegations in the case are that the City of Charlottesville and others infringed First Amendment rights of Unite the Right participants by allowing Antifa to conduct a violent Heckler’s Veto as a pretext to declare an unlawful assembly and disperse the rally before it could even begin. [You can read the complaint here]

Judge Moon ruled that there is no Heckler’s Veto cause of action and that police have no duty to protect speakers from a violent reaction by protesters. The decision was so astounding that I became curious about the agendas of his court staff. After some research, I found that Moon’s clerks, Joshua Lefebvre and Hutton Marshall, are “best of friends” with Elizabeth Sines, the lead plaintiff in the megasuit against UTR attendees. 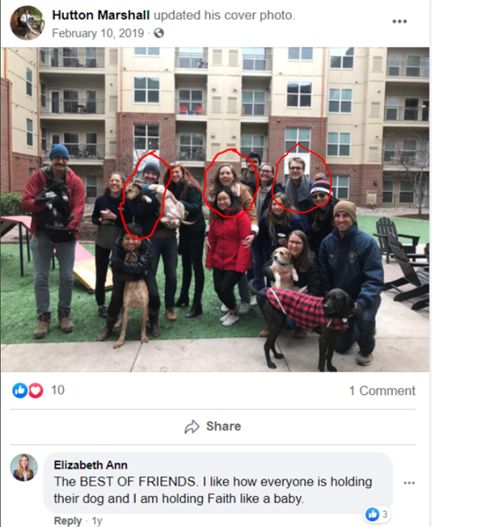 Upon motion from my attorneys, the judge recused the two law clerks from case. You can read his order here.

Further research has revealed that Moon’s other clerks have unacceptable conflicts of interest in the form of their relationship with the government of Israel. This is significant because the Unite the Right defendants include some of the most high-profile American critics of the Israeli government. Dascher Pasco, one of Moon’s clerks in 2018, made prejudicial statements about the Unite the Right while in Israel working for an Israeli “BirthRight” propaganda tour, iTrek. 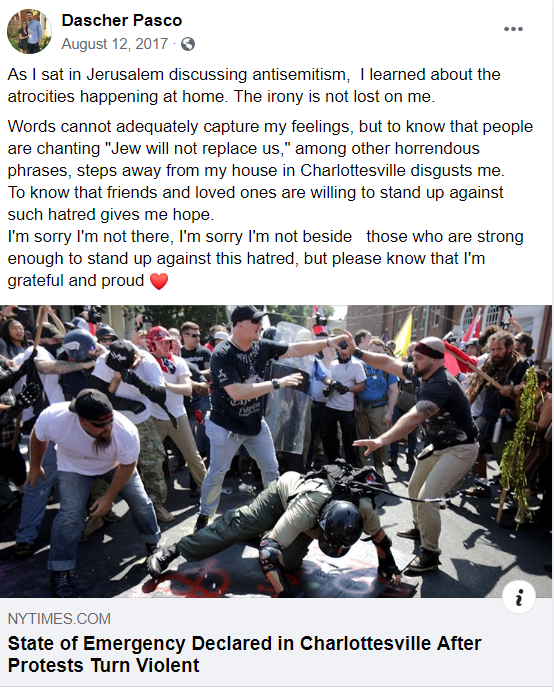 Moon’s law clerk Robert DeRise has been legal counsel for the Israeli Ministry of Foreign Affairs and Defense Ministry. In fact, he represented both parties in a high profile incident in 2010 where Israeli soldiers raided a flotilla carrying aid to the Gaza Strip and killed 10 humanitarian aid workers [Turkish Man Dies Of Wounds Sustained During Israel’s Attack On Solidarity Ship,  IMEMC News, May 24, 2014]. 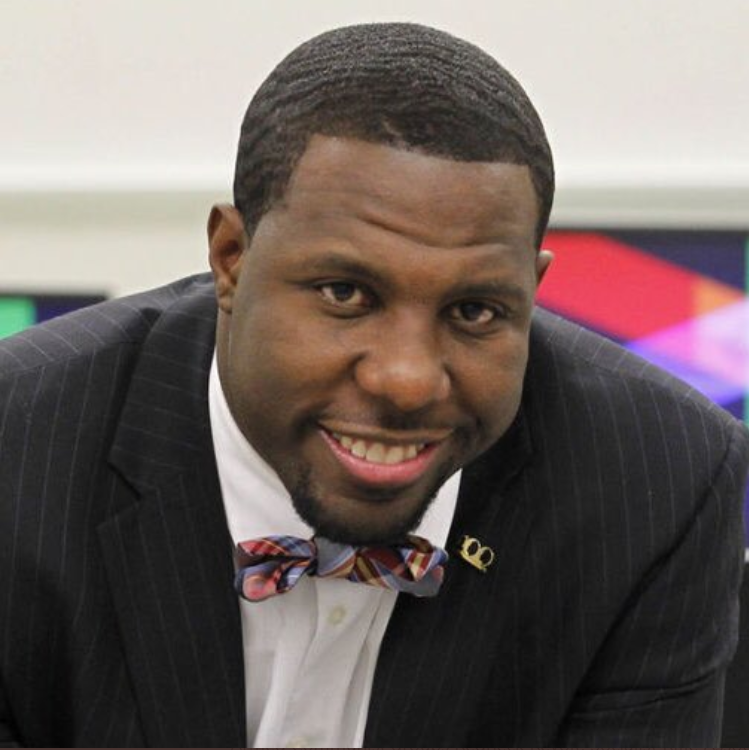 Those who’ve followed my journalism for a while may remember my discovery of anti-white and pro-rape tweets by the former Vice-Mayor of Charlottesville Wes Bellamy. It was Bellamy who initially made removing the Charlottesville Robert E Lee statue a contentious public issue. Previous to his arrival in Virginia, it was a non-issue within both the black and white communities.

Although served for a federal subpoena to testify, Bellamy has flouted the authority of the court and refused to show up to testify at deposition.

Therefore, my attorney James Kolenich has asked the court to sanction Bellamy by ordering him to appear for testimony and to pay attorney’s fees for the wasted time and expense he has caused our legal team. [Read the Motion here]

What shape are the defendants in to defend themselves?

The wealthy and politically connected interests behind the Sines litigation have exploited the power advantage the wealthy have in civil courts to beat up indigent, and in some cases naïve, opponents.  Out of 24 defendants only 10 have legal representation.

Kline, Richard Spencer’s former lieutenant, has perhaps fared the worst in the litigation. As a former president of Identity Europa, his former organization was contractually mandated to pay for his legal defense. Nevertheless, he threw it all away by refusing to communicate with his attorney or cooperate in the litigation.

Text messages released in the discovery process show Richard Spencer and Kline agreeing to a scheme to “seize operational control” of the rally from me. They speculated that I might be a “beady eye(d)” Jew because of my resistance to Neo-Nazi influences at the rally [Texts between white nationalist “Unite the Right” organizers show distrust, strife, by Tyler Hammel, The Daily Progress, October 17, 2018].

[Note: Please do not bother the Goldberg family mentioned in the following texts between Kline and Richard Spencer. They are not actually my relatives. In fact, for the record, I am not Jewish.] 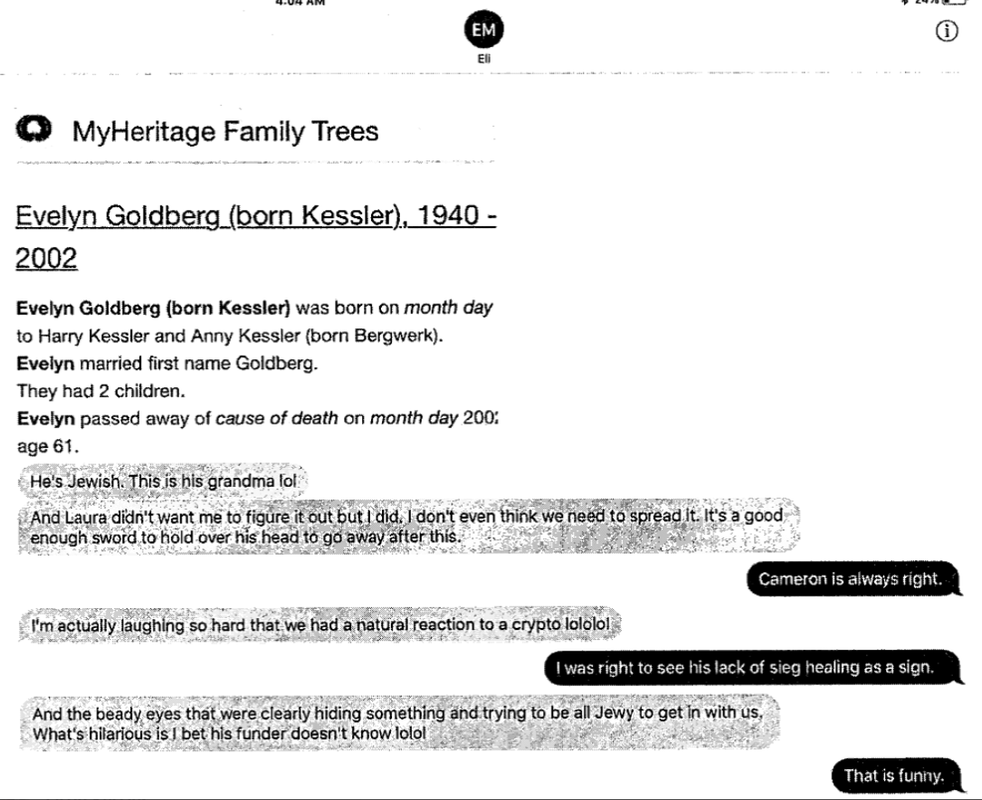 Kline has since been since been severely sanctioned to the tune of $12,528.33 and jail time for failing to comply with discovery or show up to testify under oath for depositions. He has also been chastised by the judge for repeatedly lying, a problem uncovered earlier by the New York Times. [Elliott Kline, 'Unite the Right' organizer ordered jailed in civil suit brought by Charlottesville residents, by Andrew Blake, Washington Times, January 4, 2020].

The former Traditionalist Workers Party (TWP) leader lost legal counsel back in 2019 after failing to pay his legal bills. He has now renounced his former beliefs regarding White people and works with a “reformed hate” group.

Heimbach has also been sanctioned $12,528.33 by the court for noncompliance with discovery matters [Federal judge issues thousands of dollars in penalties for Unite the Right rally participants, by Amanda Williams, NBC29, May 26, 2020].

Cantwell lost legal representation after money problems made it impossible to pay his legal bills. However, Cantwell has larger problems: he is currently an inmate of the New Hampshire penal system after the FBI charged him with multiple felony counts related to allegedly threatening to rape the wife of a rival far Right personality known as “Cheddar Mane” [Keene white nationalist indicted on new federal charges, by Paul Cuno-Booth, Sentinel Source, July 13, 2020].

Invictus, who is a lawyer, denies that he has ever been lawfully served in the litigation. But to the extent that he has to defend himself, he is also hampered by being incarcerated in April 2020 after police accused him of kidnapping his wife at gunpoint.

The most serious kidnapping charge was dropped for lack of probable cause [Fla. white nationalist’s SC lawyer calls kidnap charge absurd. Here’s what judge said, by Andew Dys, Herald, February 19, 2020]. But he remains in jail on charges of domestic violence of a high and aggravated nature and possession of a gun during a violent crime.

In echoes of a prior Cantwell prosecution in VA (unrelated to the New Hampshire troubles), Daily Stormer podcast host Ray was indicted on charges of Malicious Use of Gas for allegedly releasing pepper spray at the August 11 torch march at the UVA rotunda. However he appears to have been  on the lam since the indictments were handed down in June 2018. His lack of participation in the lawsuit has led the judge to threaten issuing a bench warrant for his arrest and sending U.S. Marshals to transport him to Charlottesville [Rally suit plaintiffs seek arrest of another defendant, by Tyler Hammel, Daily Progress, July 24, 2020].

All the Leftist heavy hitters are lining up behind the $9 million dollar Sines juggernaut. When multi-billion-dollar propaganda empires like the Anti-Defamation League and Southern Poverty Law Center put their thumbs on the scale my little story about what really happened in Charlottesville doesn’t matter a hill of beans. 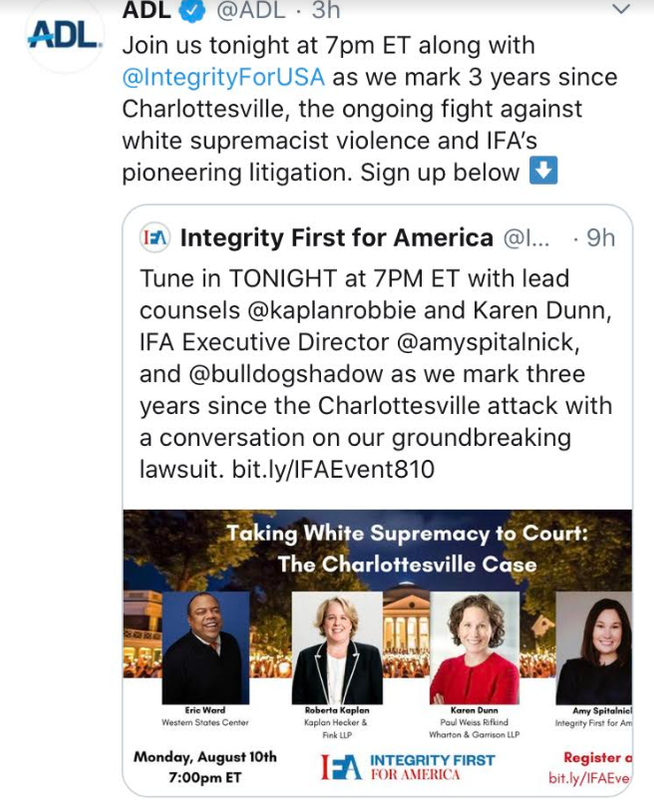 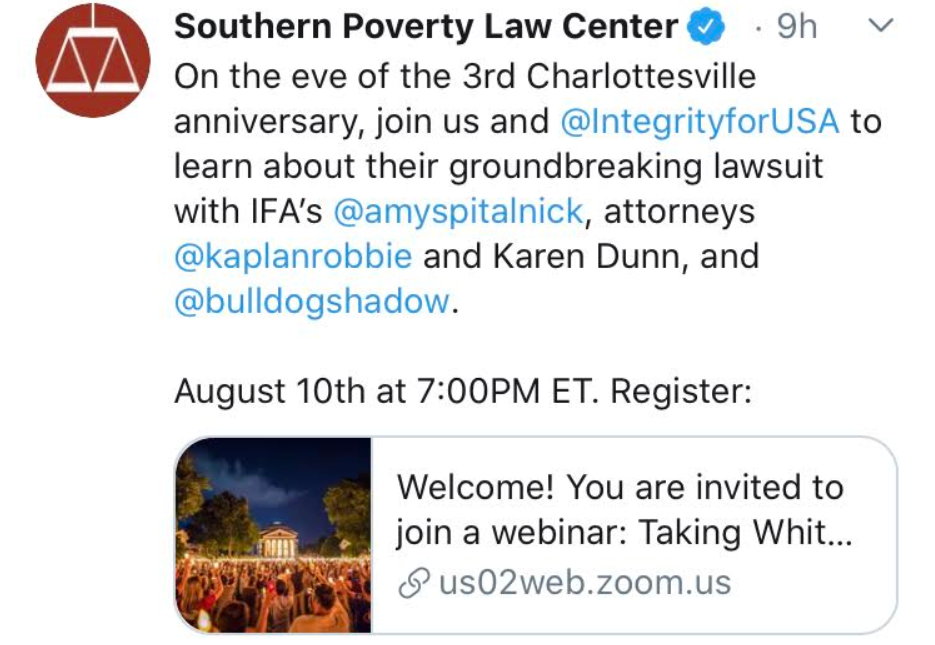 No matter how screwed up, indigent, offensive and frankly weird some of the Unite The Right leaders have turned out to be, they did not conspire with James Fields. They still have free speech rights (at least on paper). And they have a right to defend themselves when an army of Antifa goons comes to take that away from them by force.

The legal world and the Main Stream Media believe this case is a fait accompli. It’s my job, and the job of my attorneys and my fellow bill-paying co-defendants, to make sure it isn’t.

And maybe, just maybe, our small plucky crew can strike a devastating blow against the evil empire in the process.

See you on the other side…

Jason Kessler [Email him |Tweet him] is a freelance journalist and activist who has written for VDARE.com, Daily Caller and GotNews as well as his own site JasonKessler.us. He’s also the president and founder of the America First non-profit Unity and Security for America.