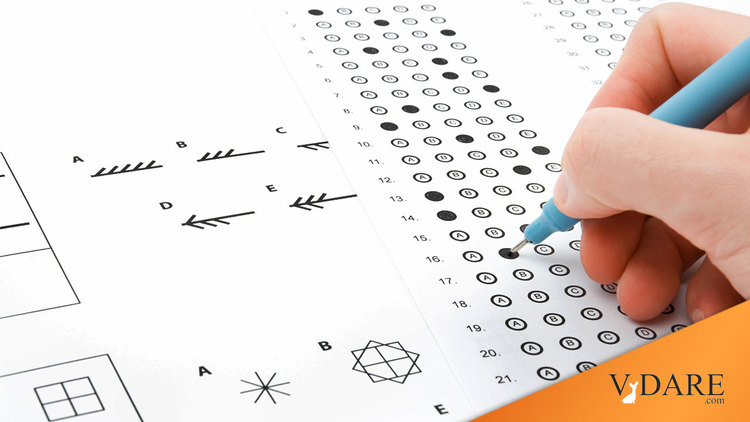 The racial gap in average IQ is one of the most important factors in modern American life. We can tell how important it is because we aren't allowed to talk about it. The IQ gap is rather like the dog that didn't bark in the Sherlock Holmes story, palpable by its absence.

Raising black IQ was an explicit goal of Great Society programs such as Head Start because, in the words of liberal Harvard sociologist Christopher Jencks:

"If racial equality is America's goal, reducing the black-white test score gap would probably do more to promote this goal than any other strategy that could command broad political support." [ America's Next Achievement Test , The American Prospect, Sept/Oct 98]

When the 1960s-1970s burst of spending failed to deliver quick results, however, the topic was slowly driven out of polite society.

For example, last week the New York Times ran what seems like its 100th article in recent years on the racial gap in school achievement. ("Schools Slow in Closing Gaps Between Races," by Sam Dillon.) Now, Occam's Razor would suggest that the simplest and thus most likely explanation for the persistent gap in achievement is the equally persistent gap in aptitude. But you aren't supposed to mention that in the NYT.

Fortunately, a debate at the American Enterprise Institute in Washington D.C. this Tuesday morning, November 28, from 10 to 12 will address this issue frankly: The Black-White IQ Gap: Is It Closing? Will It Ever Go Away?

The debaters will be two top IQ experts and all-around good guys, Jim Flynn (of "Flynn Effect" fame) for the affirmative and Charles Murray (co-author of The Bell Curve) for the negative.

Murray, along with his late co-author Richard J. Herrnstein, coined the term "Flynn Effect" in recognition of the work done by Flynn on the worldwide rise in raw IQ scores. Since the 1940s, social scientists have known that the average number of questions answered correctly on IQ tests has been going up over time, requiring test-makers to make scoring more rigorous. Flynn, in the 1980s, did the most to bring this curious phenomenon to wide attention. [VDARE.COM note: There have been suggestions that it should have been called the "Lynn Effect", after British psychometrician Richard Lynn. The controversy is discussed here.]

Recently, Flynn, a political scientist at the University of Otago in New Zealand, and William Dickens of the Brookings Institute published "Black Americans reduce the racial IQ gap: Evidence from standardized samples" in Psychological Science. Looking at some major IQ tests such as the military's Armed Forces Qualification Test, the Wechsler, and the Stanford-Binet, they argue for a 4 to 7 point decline in the gap between 1972 and 2002.

(In case you're wondering, this would be substantially bigger than could be accounted for by increases in interracial marriage, or in mixed race people changing their designation from white to black.)

Measuring changes over time in relative IQ scores is a challenging problem. Variations in the precise methodologies of IQ tests can affect the outcome substantially.

Normally, you don't need to worry much about how, exactly, IQ tests are constructed, since it's not all that hard to come up with one that's at least roughly accurate. An old saying among psychometricians is that "Life is an IQ test." In other words, practically all cognitive phenomena measurable are positively correlated with the general factor of intelligence. So it's almost impossible to devise a test that's completely wrong.

On the other hand, tracking subtle changes over the years raises subtle technical questions.

Consider the analogous topic of the height of NBA basketball players. No matter whether you measure them with a doctor's scale, yardstick, tape measure, or just eyeball them, you will still come to the quite correct conclusion that the average NBA player is … extremely tall.

Yet, if you are trying to figure out whether they are still getting taller over the years, methodology matters.

This is surprising, considering how much more globalized the pool of athletes from which the NBA draws has become.

If you want to be absolutely certain that pro basketball players aren't getting any taller, though, you'd need to carefully investigate whether there were any changes over time in how the NBA obtained these heights. Perhaps the league used to allow players to exaggerate their heights more, so they really are getting taller? Or perhaps the soles of the sneakers they wear when being measured have become thicker, meaning they are actually getting shorter?

Similarly, IQ tests change over the years in ways that are hard to summarize.

For example, when the military's Armed Forces Qualification Test was standardized on a nationally representative sample of 15-23 year-olds in 1980, the white-black gap was an oddly large 18.6 points (on a scale where non-Hispanic white IQ is 100 and the standard deviation is 15).

Subsequent analysis showed that the unusually low scores achieved by black males on the AFQT in 1980 were caused by more blacks being likely to give up and not finish the imposing105-page long paper-based test after they realized they weren't going to score well enough to be allowed to enlist. (From 1992 through 2004, virtually all enlistees in the U.S. military had to score at least at the 30th percentile in IQ.)

In 1997, the AFQT was re-standardized. But now it is given on a computer that adjusts to how well the test-taker is doing. If you miss a lot of early questions, the program will then give you easier questions. This makes taking the test less discouraging for low IQ individuals, so that somebody who, say, would have given up halfway through the old 105-page test and gotten a 65 might keep going and get a 75 instead.

The big, difficult question: how much of the relative black gain on the AFQT of 3.9 points over 17 years was due to changes in the test—and how much to actual improved performance by blacks.

I suspect methodological alterations have, on the whole, been biased in favor of higher minority scores. Test publishers have been under relentless pressure to eliminate any questions that might appear biased against blacks.

For example, the SAT scuttled its notorious "yacht is to regatta" analogy question back in the mid-70s. Then, to accommodate the University of California's attempt to evade Proposition 209's ban on affirmative action in college admissions by finagling the entrance exam, the SAT eliminated analogies entirely in this decade.

This kind of fiddling with the test could cause a modest rise in black scores.

The impact wouldn't be huge, however, because the tests were always less biased than the media claimed. For example, blacks did just as well, relatively speaking, on the "regatta" question as on the overall Verbal SAT test. And I wouldn't be surprised if ridding the SAT of analogies backfires and lowers the average black score because African-American humor is quite oriented toward analogy, simile, and metaphor: "Yo mama is so fat, she's ..."

The results Flynn and Dickens came up with are quite curious. They found strikingly different black IQs at different ages:

In their counter-rebuttal to Arthur Jensen and J.P. Rushton's rebuttal, Flynn and Dickens mention something else interesting:

These age discrepancies could be explained by two contrary models (or a combination of the two):

Then, the pseudonymous boys at the Gene Expression blog delved into this topic, looking at more IQ studies than Flynn and Dickens did. At my suggestion, "Darth Quixote" graphed the average black IQ found by numerous studies with year of birth on the horizontal axis: 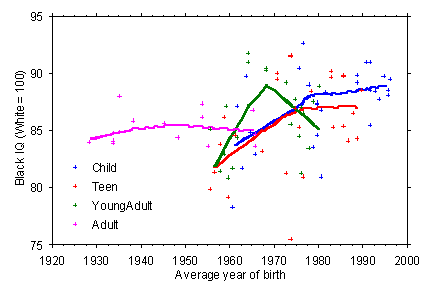 The blue line tracks average scores of black children, which are now up around 89. The red line is for teens, now up to 87; the green line for young adults, now at 85, down a few points from earlier; and the pink adult line has long been flat at 85.

This seems to show that young blacks born in the years leading up to 1975 saw rising IQ scores. That's not too surprising. Those were prosperous years with black life improving in many ways. I would guess that a shortage of calories for pregnant black women stopped being a problem around then. I wouldn't be surprised if average height of blacks grew quickly during those years too.

Since then, the results are more ambiguous.

Twin studies have shown that the heritability of IQ tends to go up as you get older and create your own environment—one more in touch with your particular genetic predilections than the environment your parents provided for you.

This suggests an interpretation of this graph: that the much-derided public schools, which are constantly blamed for the poor performance of blacks, are actually doing a relatively good job of getting blacks to exercise their brains, thus narrowing the white-black IQ gap among the young.

The real problem comes when blacks leave the school system and choose a lifestyle for themselves. They apparently fail to impose enough intellectual rigor on themselves to maintain the positive trend.

Alternatively, K-12 schools could be depressing white performance, which then goes up when they escape to the greater challenges of higher education and the world of work.

In any case, rare public debates like the Flynn-Murray match-up on Tuesday are oases in the intellectual desert. This country very much needs more.