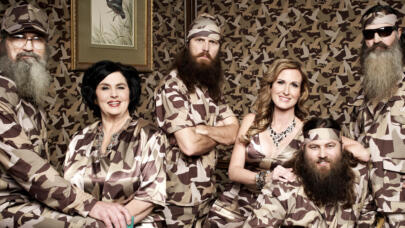 "Duck Dynasty's" Phil Robertson is not alone. He's the latest in a long, long lineup of politically incorrect targets of the left's sensitivity mob. Founded in 1985, the Gay and Lesbian Alliance Against Defamation (GLAAD) gangstas won't stop until both the cultural and legal enforcement of their agenda are the norm.

The A&E network (Atheists & Elitists) suspended the reality TV patriarch and self-made businessman on Wednesday for the Biblical views he expressed in an interview with GQ. Robertson was asked by the liberal magazine what he viewed as sinful. Drawing on the condemnation of sexual immorality in Corinthians 6:9, he cited "adulterers, the idolaters, the male prostitutes, the homosexual offenders, the greedy, the drunkards, the slanderers, the swindlers—they won't inherit the kingdom of God."

Robertson's punishable transgressions? Responding honestly to a question posed to him (this was not an unsolicited "anti-gay rant"; it was a response) and abiding by his Christian faith. GLAAD's P.C. Praetorian Guard sprung into repressive action. The same group that initially gave f-word-spouting, homophobic liberal Alec Baldwin a pass accused Robertson of uttering "some of the vilest and most extreme statements" against "LGBT people" ever. (They should listen to the Koran-inspired executioners' rants of gay-hanging and gay-stoning Iranian mullahs sometime.) GLAAD also railed against Robertson's "vile" preference for female anatomy over male as if it were an international human rights violation.

A&E folded faster than a stadium seat, immediately disavowing Robertson and suspending him from his family's show indefinitely. Meanwhile, network execs continued to cash in on the lucrative "Duck Dynasty" empire with a marathon of program reruns on the very day they threw Robertson under the bus. The network is free to do that, of course. And I am free to tell you all about the radical thugs that A&E indulged.

GLAAD has worked tirelessly to marginalize and suppress the free speech of Christian leaders, Christian businesses and conservative talk-radio hosts dating back to their infamous Dr. Laura boycott 13 years ago. The group's mission is not about equality or defending against "defamation." It's about silencing critics, making open debate radioactive, demonizing people of faith and making even the slightest perceived slight a hate crime.

Last year, GLAAD speech-squelchers issued a blacklist of 34 Christian commentators they wanted networks to ban from their air for "extreme" views (read: opposing gay marriage). Earlier this year, GLAAD attacked the National Geographic Channel for partnering with the traditional values-promoting Boy Scouts on a reality TV program. GLAAD is free to start its own Gay Scouts, but instead chose to harangue NatGeo for refusing to run a "disclaimer" at the beginning of each show condemning the Boy Scouts' leadership policies.

It's not enough to live and let live. You must repent and genuflect before the self-serving gods of selective progressivism. That's why GLAAD forgave Hollywood director Brett Ratner for using the word "fag." He was allowed back into the protected Hollywood club after submitting to GLAAD reeducation camp and appearing in GLAAD public service announcements. Bill Clinton, who authored both the Defense of Marriage Act and the "Don't Ask, Don't Tell" policies so reviled by the homosexual lobby, ended up receiving a GLAAD "Advocate for Change" award earlier this year—for changing his mind when politically expedient.

For the civility police, the operational motto is always: "Do as we say, not as we do, in the name of social justice. Amen."

The tolerance mob's insatiable quest for power and control has led to such unhinged witch-hunting that many of its own erstwhile allies are balking. Novelist Bret Easton Ellis called GLAAD the "gatekeepers of politically correct gayness." He was attacked as a "self-loathing gay man," but unlike A&E, he didn't give in. "An organization holding an awards ceremony that they think represents all gays and also feels they can choose which gays can and cannot be a member of the party is, on the face of it, ridiculous."

The liberal The Atlantic magazine recounted how GLAAD invited Fox News anchors Kimberly Guilfoyle and Jamie Colby to a New York event and then issued a press release condemning them and their employer after the network failed to cough up big donations for gala tables. Wrote the Atlantic's James Kirchick: "Aside from raising money to perpetuate its own existence and throwing swanky parties (the event feting Bill Clinton was one of three different media-award ceremonies, with others in New York and San Francisco), GLAAD has no purpose. That is, unless one views it not as a gay-rights organization but rather a partisan liberal one."

Nail, meet head. GLAAD's counterculture warriors know full well: It's a small leap from forcing Phil Robertson, the Boy Scouts and Rush Limbaugh out of the public square to forcing wedding photographers and cake bakers to serve gay customers against their will and mandating that Catholic medical providers and Hobby Lobby violate their religious conscience and cover abortion pills in order to stay in business.

Michelle Malkin [email her] is the author of Invasion: How America Still Welcomes Terrorists, Criminals, and Other Foreign Menaces to Our Shores. Click here for Peter Brimelow’s review. Clickhere for Michelle Malkin's website. Michelle Malkin is also author of Unhinged: Exposing Liberals Gone Wild and Culture of Corruption: Obama and his Team of Tax Cheats, Crooks & Cronies