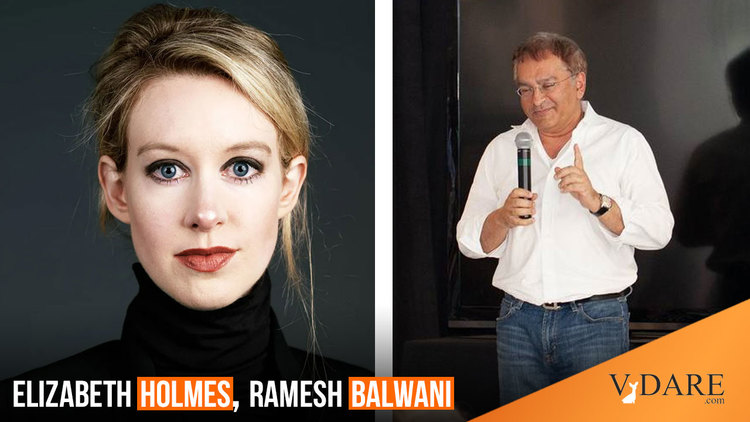 Elizabeth Holmes And Theranos: Female Psychopath Or Pakistani Immigrant Grooming? (Or Both?)

Is there more to the Theranos debacle than we are being told? Indeed, could there even be a immigration dimension to what has happened to Elizabeth Holmes and her once-hailed company?

If convicted, she faces up to twenty years in jail.

Holmes dropped out of Stanford aged 19, in 2003, to set up her company, “Theranos.” She claimed to have developed equipment which could diagnose multiple serious illnesses using only miniscule drops of blood. This miracle piece of technology would mean that patients could constantly be aware of their own health status. They could test themselves, quickly conveying the results to their medics. Endorsed by Bill Clinton, Henry Kissinger and many others, “The Next Steve Jobs,” who even dressed in black like her supposed idol, was running a company worth $9 billion by 2015 [Elizabeth Holmes on trial, by Samuel Fishwick, Evening Standard, September 2, 2021].

But it was all a sham, as she surely knew. Silicon Valley companies regularly exaggerate in order to drum up investment capital, but Holmes’ claims—constantly repeated credulously in the media—were simply untrue. Her machine took 99.9% less blood than standard devices, didn’t work and in fact gave many dangerous false results. People who showed up for tests with the device were actually tested using old-fashioned needles instead. If they weren’t, they were, for example, falsely told that they were having a miscarriage [Elizabeth Holmes’ trial: Theranos patient testifies about miscarriage diagnosis, BBC News, September 23, 2021].

They might also be put on life-changing medication for diseases they did not have [As Theranos drama unwinds, former patients claim inaccurate tests changed their lives, by Ken Alltucker, USA Today, July 5, 2018].

By 2015, when serious issues were being raised about her product, Holmes proclaimed: “First they think you’re crazy, then they fight you, then you change the world” [Theranos founder was 'personally shocked' about the story slamming her company today, by Kevin Loria and Lauren F. Friedman, Businessinsider.com, October 15, 2015]. But by 2018, numerous fraudulent practices had seemingly been uncovered and Theranos came crashing down.

According to a whistle blower, Holmes instructed that patient samples continue to be processed despite knowing that the technology didn’t work. This could only mean she was deliberately lying, as shown by her subsequent string of “I don’t knows,” in response to questions the answer to which she’d previously been confident of, in her deposition in 2019 [Ex-Theranos CEO Elizabeth Holmes says 'I don't know' 600-plus times in never-before-broadcast deposition tapes, by Taylor Dunn et al., ABC News, January 24, 2019].

Further in line with her being a psychopath, who would allow herself to become pregnant, as Holmes has, with a 20-year jail sentence hanging over her? She became a mother in August, having married a younger man [Theranos founder Elizabeth Holmes welcomes 1st child with partner Billy Evans ahead of criminal trial, by Taylor Dunn et al., ABC News, August 6, 2021]. Surely… a person who just wanted a child, no matter the consequences for the child, or a person knowing that the child could be useful in terms of clemency.

The prosecution argues that Holmes is a manipulative liar. And, let’s face it, there is something satisfying about seeing self-congratulating proto-Woke types, who backed Holmes because she was young and female, losing money that they might have better invested in a company run by an experienced, qualified middle-aged white man.

The defense, however, argues that Holmes is the innocent victim of her sometime lover, Pakistani immigrant businessman Ramesh “Sunny” Balwani, whom she began employing as the company’s “chief operating officer” in 2009, although the pair had apparently been lovers for a considerable time before that.

According to Holmes’ lawyers, Balwani engaged in coercive and abusive behavior towards her, manipulated her, isolated her, would be present at meetings she chaired in order to control and intimidate her, and was sexually abusive. He would: “withdrew affection if she displeased him, controlled what she ate, how she dressed, how much money she could spend, who she could interact with.” He also threw “hard, sharp objects at her” and “controlled her sleep.” He was “dominating her and erasing her capacity to make decisions” and it is under this pressure that she committed fraud [Disgraced Theranos founder will blame ‘abusive’ ex-boyfriend in fraud trial, by Richard Luscombe, The Guardian, August 28, 2021].

There might be something to this. There has developed a culture, most notoriously in poor areas of Britain, of Pakistani men grooming, manipulating, controlling and abusing much younger white girls. (There is a roughly a 20-year age gap between Holmes and Balwani) [Comment: Our worst grooming cases are rooted in the culture of rural Pakistan, by Dr. Philip Wood, Politics.co.uk, July 3, 2013].

Intimate partner violence, including control and coercion as well as direct physical abuse, is very high in Pakistani communities, according to a systematic literature review [Intimate Partner Violence in Pakistan, by Parveen Ali et al., Trauma, Violence and Abuse, 2015]. Additionally, corruption levels in Pakistan are infamous and there have been many cases of Pakistanis involved in medical financial fraud, such as a Pakistani doctor in Virginia in 2019 [Virginia Physician Arrested for Medical Fraud, by News Despatches, India Abroad, November 27, 2019]. VDARE.com has run many stories on Pakistani  and Indian immigrant medical fraud, and other benefits of diversity:

So, here’s a thought: Elizabeth Holmes, like many business people, as British psychologist Prof. Kevin Dutton has found [Do psychopaths really make better leaders?, by Jessica Brown, BBC News, November 2, 2017], has psychopathic traits. And, like many people in Silicon Valley, she oversold her idea in order raise capital. Leftist virtue-signalers love it—and irresponsibly encourage this “out of her depth” just-about-adult—because she makes their empirically inaccurate but emotionally satisfying ideology of “equality” come true. She became a self-made female billionaire in part because people were prepared to switch off their critical faculties in pursuit of a feminist fantasy.

Being narcissistic, Holmes can’t admit failure. And she certainly can’t admit, as Greek psychologist Menalaos Apostolou has argued, that females are evolved to submit to the patriarchy and to be directed by men, and will often make bad decisions when left to their own devices [Sexual Selection Under Parental Choice, by Menalaos Apostolou, 2014]. So, she gets involved with an abusive fraudster, soon finding that she can’t go back, overwhelmed by her situation.

Maybe, one day, a defense attorney will argue that women like Elizabeth Holmes should never have been put in this situation or anything close to it. Maybe they will argue that it is people like Bill Clinton and other Leftists who should take responsibility for inflating the ego of a narcissistic young girl who, despite her narcissism, really was “just a young girl.”

The defense attorneys might also argue that it was a mistake to import business ethics from the Indian subcontinent.