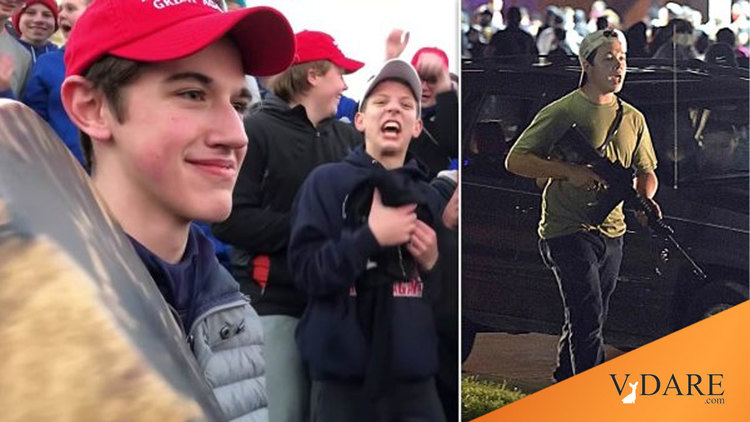 "Even The Smallest Person Can Change The Course Of The Future": Nick Sandmann, Kyle Rittenhouse And The Reality Of Being White At The Wrong Place At The Right Time To Change History

“Even the smallest person can change the course of the future,” wrote J.R.R. Tolkien in his seminal Lord of the Rings: The Fellowship of the Ring.

The extremely hostile and anti-white climate fostered and fomented by the regime media after the election of Donald Trump in 2016 meant any moment a white person engaged publicly with a non-white person, an opportunity was at hand to demonstrate this individual encounter—if sufficiently showing white "supremacy"—was enough to collectively punish all white people across America as racist.

Our regime media tried it in 2019 with Nicholas Sandmann (failing spectacularly) and since the Kenosha riots came to a resounding end courtesy of the supreme marksmanship of Kyle Rittenhouse, the young white male brandishing an AR-15 to protect private has been deemed the second coming of white supremacy and a stalwart defender of systemic racism.

“The parallels between me and Kyle Rittenhouse are impossible not to draw,” Sandmann wrote in a column for the Daily Mail in which he directly reached out to lend support. “The way the media has treated you is terrible, and you don’t have to face it alone.”

Rittenhouse, an Illinois man on trial for intentional homicide and other charges in the shooting deaths of two people during chaotic August 2020 demonstrations in Kenosha, Wisconsin, was quickly labeled a “White supremacist” by liberal pundits at the height of protests sparked by the police shooting of Jacob Blake. Rittenhouse says he acted in self-defense and a jury is currently deliberating to decide his fate.

“Kyle was almost immediately labeled a ‘white supremacist’ and a ‘domestic terrorist.’ To many, my red MAGA hat clearly meant that I was a racist,” Sandmann continued. “Kyle wasn’t given his day in court by his critics. And neither was I. The attacks on Kyle came from the national news media, just as they came for me. They came quickly, without hesitation, because Kyle was an easy target that they could paint in the way they wanted to.”

In January 2020, CNN settled a multimillion-dollar defamation lawsuit filed by Sandmann—who became known as the “Covington kid”—over the liberal network’s botched coverage of a viral confrontation with a Native American elder that had portrayed the Kentucky teen as the aggressor.

The $250 million defamation suit sought damages for the “emotional distress Nicholas and his family suffered” in the fallout of the network’s reporting. The settlement amount was not disclosed.

Sandmann was swept up in the 2019 controversy after a video clip depicted the “MAGA” hat-wearing student smiling at Nathan Phillips beating a drum and singing a chant as he was surrounded by Sandmann’s peers, who all had joined in on the chant in front of the steps of the Lincoln Memorial.

However, several mainstream media outlets, including CNN, portrayed the incident with Sandmann and the other teens as being racially charged before it was discovered by additional footage that a group of Black Hebrew Israelites had provoked the confrontation. The radical group threw racial slurs at the students as they were waiting for their bus following a March For Life event in Washington, D.C.

Footage then showed Phillips, who was in town for the Indigenous Peoples March, approaching the students amid the rising tension between the two groups.

“This is the problem with liberal media outlets in the United States. They want to get the story first, get the most views, make the most money, and advance the agenda from liberal patrons,” he wrote. “These outlets cover themselves when they are wrong with small footnotes at the ends of long articles, clarifying that new information has come out and that they have updated their coverage. News shouldn’t be a scoreboard that constantly changes. News is about coverage that includes a statement of facts that does not need to be corrected. But, the liberal media doesn’t do this. The liberal media rushes to be the first to report.”

Sandmann wrote, “In our hyperpolarized society, the first impression of Kyle has been set in stone, probably for the rest of his life,” specifically calling out President Biden, LeBron James and Rep. Ayana Pressley, D-Mass., in addition to countless liberal pundits.

A guest on MSNBC compared him to a “school shooter,” while another said he is “arguably a domestic terrorist.” MSNBC’s Joy Reid referred to him as a “vigilante,” and Rep. Gwen Moore, D-Wis., used the “White supremacist” term when talking about Rittenhouse during an appearance on CNN in March.

“With Kyle’s name dragged through the mud, and the clear effect it is having on him, many have started to ask the question whether Kyle should sue for defamation. While I am by no means an attorney, I have gained some experience on the ins and outs of defamation and can offer an educated guess on what the outcome would be if Kyle were to sue,” Sandmann wrote, explaining how difficult defamation cases are to win.

“Should Kyle sue? It first depends on what happens in the trial, as those elements would come into play were he found guilty. However, if Kyle is innocent it would create an easier road to winning,” Sandmann wrote. “If Kyle is prepared to take on another burden in his early life, with the acceptance that it might result in nothing, I answer, give it a shot and hold the media accountable.”

When Sandmann and Rittenhouse woke up on the mornings of their respectful fateful encounters, they had no idea how much their courage under extreme derision—and the intense hatred they’d subsequently receive for not folding in the face of a chanting Amerindian or gun-toting Bolsheviks—would help change the world.

Though they had never met before fate brought them together, Sandmann and Rittenhouse are the Frodo and Sam we needed to stand up and remind us all that even the smallest among us can change the course of events.