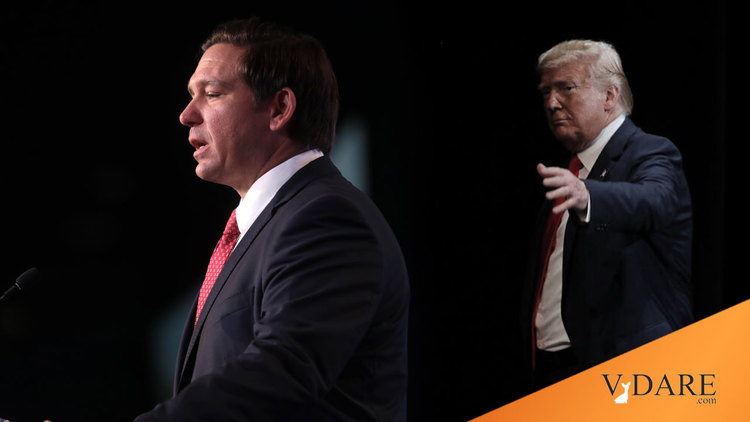 The ordeal to which President Donald Trump is being subjected—from the January 6 witch-hunt to the recent FBI raid of his Mar-a-Lago residence—is a Banana Republic persecution and another sign of the institutional rot that will eventually bring down the country. Though the charges against Trump are a nothingburger, such is the Deep State animus against him that he might be indicted anyway. If that happens, and Trump is convicted of a manufactured crime or forced out of the 2024 GOP presidential contest in some other way, the obvious question is who will replace him. Possible answer: Florida Governor Ron DeSantis, hero of the Martha’s Vineyard Massacre, who also distinguished himself at Yoram Hazony’s recent National Conservatism Conference when he attacked not just illegal immigration, but also legal immigration—thus outbidding Trump who, alas, no longer mentions the issue.

Of course, Stupid Party hacks want Trump out of the picture so they can revert to their favored Invade-The-World Invite-The-World policy program: Open Borders and perpetual wars abroad. Add to that the rest of their blueprint: tax cuts for Wall Street and Big Tech, and kowtowing to the latest attack on simple decency, in this case, “family-friendly” Drag Queen shows at which freaks expose their genitalia to children.

My guess: If the GOP Ruling Class doesn’t like Trump, they certainly won’t like DeSantis as the party’s standard-bearer, despite the Florida governor’s sterling educational and military credentials (Yale undergrad, Harvard Law, legal adviser to the Navy SEALS in Iraq). The former three-term congressman quickly became a national icon for his fierce opposition to the China Virus hysteria emanating from the D.C. Swamp. Still, despite what might be Establishment opposition to DeSantis, he may now be the future of the GOP.

In his keynote address at the National Conservatism Conference in Miami on September 11, 2022, he stirred the pot on immigration in a way Trump hasn’t for some time.

Note the move to Trump’s right on legal immigration:

And so the national interest of our country and we’ve had a variety of different immigration policies throughout our country’s history we’ve had periods where we had high immigration levels that we had success, but we’ve also had periods where we had great success with immigration levels being very low such as the years decades after World War II. So the issue is, is how does immigration serve the people of the United States and the national interest. We’re not globalists who believe that foreigners have a right to come into our country whenever they want to. It’s what we think is the right thing to do.

Attacking legal immigration is something few Republicans will do, Arizona Senate candidate Blake Masters and his Ohio counterpart, J.D. Vance, being notable exceptions.

But DeSantis has been promising on immigration for some time. In the summer of 2019, he banned local governments from establishing “sanctuary” policies and forced local law enforcement to cooperate with ICE to deport and prosecute illegal aliens [Florida Governor Ron DeSantis Signs Sweeping Bill Banning Sanctuary Cities by Hannah Bleau, Breitbart News, June 14, 2019].

In the summer of 2020, DeSantis signed E-Verify into law. Originally, the bill would have made it mandatory for employers—be they private or public—to use E-Verify in hiring. But the usual subversives undermined the bill, and trimmed it back to apply only to state agencies and private companies contracted to work for them.

As well, Treason Lobbyists who want cheap labor pushed through exemptions for the agriculture and tourism industries [Florida’s Ron DeSantis Makes E-Verify Mandatory for Public Employers, by John Binder, Breitbart News, July 2, 2020]. Based on my reading of Florida politics, it wouldn’t surprise me if a good portion of those who watered down Florida’s E-Verify were my fellow Hispanic Republicans.

These types of Republicans desire cheap labor and relish the idea of more Hispanics settling down in Florida to recreate the same Latin American environment that many of them or their parents came from.

The issue of Big Tech censorship bleeds into the National Question. Any site or individual who promotes immigration patriotism is in Big Tech’s crosshairs. This also applies to the diverse segments of the New Right. DeSantis signed a bill that would allow Floridians to sue Big Tech companies for deplatforming them [DeSantis Signs Law Allowing People to Sue ’Big Tech’ for ’Deplatforming,’ by Theodore Bunker, Newsmax, May 24, 2021]. It has critics, for example Laura Loomer, but it’s a good first step if you ask me.

“DeSantis lifted tropes used by other conservatives on Twitter over the weekend, mocking one headline that blamed the parade violence on an ‘SUV (that) drove into a parade of Christmas folks,’” Florida Politics’ Gancarski reported:

“You never actually hear the discussion about who committed this,” DeSantis complained. “What was the motivation? This guy was a career criminal, let out, didn’t really have any bail, basically. Should not have even been on the street. Had clear anti-White animus.”

DeSantis’ comments about Brooks are a radical departure from the spineless neocon way of conducting political affairs. While DeSantis is no identitarian, he instinctively recognizes the harsh realities of American race relations and will call out clearly racially motivated attacks. Until recently, a Republican facing a similar situation would instantly shift the topic to tax cuts or some banal issue of scant political consequence.

So for once, a Republican is fighting for his constituents and not abstract ideals or entities hostile to them.

But it’s vital to note that the progress DeSantis has made as governor could go to waste because of the Florida’s changing demographics. From 2000 to 2018, the Florida electorate has gone through a significant transformation. In 2000, 74 percent of eligible voters in the Sunshine State were white. Nearly two decades later, that number has fallen to 61 percent. By contrast, the Hispanic numbers stood at 11 percent in 2000, and grew to 20 percent in 2018 [The Changing Racial and Ethnic Composition of the U.S. Electorate, by Ruth Igielnik and Abby Budiman, Pew Research Center, September 23, 2020].

And that doesn’t count illegals. Pew had reported that the state’s illegal population was already 775,000 in 2016, probably a cautious estimate when all numbers are considered [U.S. unauthorized immigrant population estimates by state, February 5, 2019].

A full-fledged Amnesty could make the Sunshine State much more competitive than currently expected. Avoiding that nightmare is why an immigration moratorium is so crucial to the future of the country.

Florida has become a standard bearer for the patriot Right. DeSantis should not only continue making Florida one of America’s hospitable states by restricting immigration at the state level, but also pick a worthy successor to ensure that his positive legislative legacy lives on (Florida governors are limited to two four-year terms—DeSantis is running for his second). Moreover, a competent successor would allow Florida to implement tighter immigration restrictions. That’s when you will know that Florida’s political leadership is serious about tackling the National Question.

Ultimately, Republicans must get serious about immigration. Granted, other non-immigration issues are important. But they are small potatoes compared to The Great Replacement that the Biden Regime is pushing with single-minded determination.

Among the concerns about DeSantis is his proclivity to pursue policies that seem to cater more to the interests of foreign countries, notably Israel. “As a matter of law and principle, the State of Florida will not tolerate discrimination against the State of Israel or the Israeli people,” DeSantis said when he put Unilever on a list of “scrutinized companies” allegedly hostile to Israel:

Florida is sending a message to corporate America that we will defend our strong relationship with the Jewish State. I will not stand idly by as Woke corporate ideologues seek to boycott and divest from our ally, Israel.

Israel is a friend of Florida.

My opinion: The United States should not maintain an “entangling alliance” with Israel—but we can learn a thing or two from its immigration policies.

I’m not a fan of the insane pedestalization of Israel but it’s a cost of doing business in the GOP, which still has a large constituency of evangelical voters who are very sympathetic to Israel.

Then again, as a single-issue voter, I can hold my nose and pull the lever for politicians who have some questionable policy views—if they get the National Question right. Mass migration is that important an issue. So I’ll give politicians a pass on other issues if they nail the immigration question.

When analyzed properly, Ron DeSantis is an interesting political figure. I’ll admit that I’m more of a fan of former president Trump simply because he was the one who orchestrated America’s populist revolution.

In many respects Trump’s victory has given many Republicans, even DeSantis, the courage to take edgier positions and be more confrontational with the corporate press and its political allies.

Nevertheless, I’ll give credit where credit is due. DeSantis may be a worthy successor to Trump, even with the few concerns I may have about him.

Pedro de Alvarado [Email him] is a Hispanic dissident who is well aware of the realities of race from his experience living throughout Latin America and in the States.

As a native of lands conquered by brave Spaniards but later subverted by centuries of multiracial trickery and despotic governance, Pedro offers clear warnings to Americans about the perils of multiracialism.