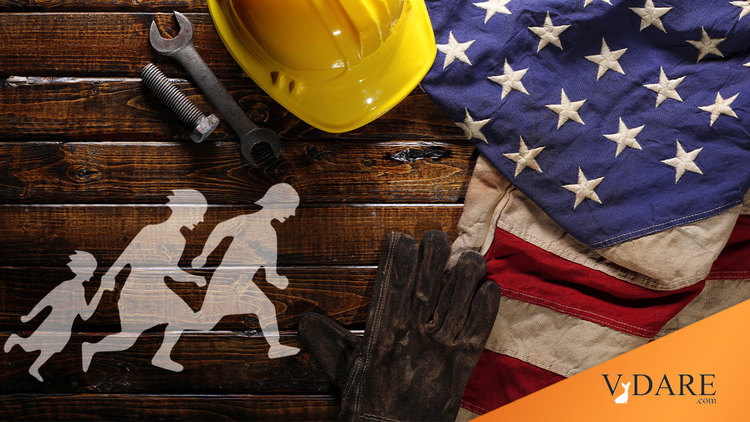 I am reminded, by the struggle over what appears to be voter fraud and the failure of recently re-elected GOP leaders to address it, of something that happened about 10 years ago, when I was a border agent at the Niagara Falls Station. Just as GOP leaders seem content with perpetually losing as long as they keep their jobs, union bosses who led an electrical union were unconcerned that illegal aliens were taking American workers’ jobs and doing substandard work that could kill someone. The bosses’ main concern: more members. Forget about expertise and qualifications. If someone has to get electrocuted so the union can have more members, so be it. Likewise, GOP leaders have one interest in mind: their own.

Agents at the Niagara Falls Station busted some illegal aliens at a motel. A little research revealed that they were employed at a local paper mill. We worked in conjunction with Immigration and Customs Enforcement, which was investigating worksite enforcement.

The illegals we caught, who couldn’t speak English, were working as electricians. We asked one of them where he learned his trade. His answer: from watching his uncle. If you’re into bad puns, you can call that shocking. You don’t learn electrical work from “watching my uncle,” and I don’t care if your uncle is George Westinghouse. Anyway, American workers at the plant told us the illegal-alien electricians did shoddy work.

Example: Three illegals needed three days to install a junction box. After we busted them, the company was forced to hire union electricians, who had quite a bit of training. Two of them installed a junction box in about three hours. When one of the electricians opened the box and looked at the work the illegals had done, he couldn’t make heads or tails of it. Wisely, he refused to touch it because he might have to accept responsibility. And he probably wasn’t all that enthused about getting blown out of his work boots, either.

After that, one of the ICE agents and I sat down with an electrical union boss. He pretended like he wanted to help us, but in the end, he never gave us any information. A moving roadblock is often more damaging than a hard roadblock. But he did say one astonishing thing that stuck in my mind. “Oh, I have no problem with them being illegal aliens. I just want them to join my union.” The comment caught me completely off guard and, to say the least, I was appalled. He said it so quickly and casually that I can’t say the ICE agent heard it. He was busy taking notes.

A side note to that story: The union chief told us that we could not meet him at his office because Kathy Hochul—recently elected governor of New York—was using it for her run for Congress, representing the Niagra Falls area.

Once upon a time, unions opposed immigration because new arrivals were seen as potential scabs. Even Cesar Chavez opposed illegal aliens because they undermined his efforts to organize a labor union. (But he softened on the issue and at the end of his life supported a walkout of table grape workers who were mostly illegal aliens [Cesar Chavez’s nuanced views on undocumented workers & immigration, UFW.com, March 2, 2021]).

Consider Samuel Gompers, himself an Anglo-Jewish immigrant, who founded the American Federation of Labor. He opposed cheap foreign workers who took jobs from and undermined the wages of unionized Americans. He was dead set against importing Chinese workers.

“The ladies’ furnishing and undergarment trade is almost under the control of the Chinese,” he wrote in 1910.

The cigar, boot and shoe, broom-making, and pork industries were for many years entirely in the hands of the Chinese, depriving many thousands of Americans of their means of livelihood. As their power grew they became independent, and in the pork industry they had secured so strong a hold that no white butcher dared kill a hog for fear of incurring the displeasure of the Chinese. This state of affairs became so obnoxious and unbearable that the retail butchers and the citizens generally finally succeeded in wresting the monopoly from the hands of their Chinese oppressors.

In factories owned by white employers the Chinese employees refused to work together with white men, and upon one occasion at least positively struck against them, refusing to work unless the white help was discharged.

But union bosses don’t see it that way these days. The boss we met was more interested in cementing union power with more members, and he didn’t care where they came from or what they did to the wages of his American workers.

Which leads me to the accusations of election fraud and the failure of GOP leaders to unite and act. Too many shady things are going on, not least delayed ballot counts. Florida can count its ballots and have results by close of Election Day. Arizona can’t. Why?

Republican leaders should be in front of every camera and microphone they can get their hands on to scream about the long delays. They should demand hand recounts.

But that isn’t happening, at least with the two top Republicans in the country next to Donald Trump: House GOP leader Kevin McCarthy and Senate GOP leader Mitch McConnell. It seems they were satisfied with losing so long as they retained their positions within the Republican hierarchy, which, wouldn’t you know it, they just did [McCarthy passes 1st House speaker test, but hurdles remain, by Lisa Mascaro and Farnoush Amiri, Associated Press, November 16, 2022; McConnell reelected Senate GOP leader: ‘Not going anywhere,’ by Lisa Mascaro, Brian Slodysko, and Mary Clare Jalonick, Associated Press, November 16, 2022]. 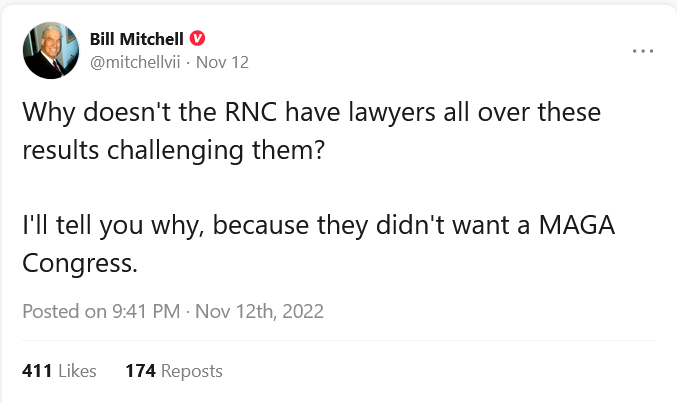 McConnell was reelected Senate GOP leader despite undermining the campaign of America First conservative Blake Masters in Arizona. He also tried to wreck the candidacy of Alaska’s Kelly Tshibaka in favor of GOP leftist Lisa Murkowski, who voted to impeach Trump. McConnell, too, opposes impeaching Biden.

And just like the union bosses cowed their membership into submission and did nothing when it came to illegal alien “electricians,” we can expect McCarthy and McConnell to do nothing to stop the communist coup that began when Joe Biden took office. They’re satisfied with the silver medal in a two-way race so long as they retain their positions.

Similarly, union bosses don’t care if members lose jobs as long as illegal aliens boost membership, which means more power for the bosses. Republican leaders have no problem with losing big elections, so long as their coffers are full and they are reelected to run the party on Capitol Hill. Their goal: stay in office.

It appears the GOP has as much difficulty finding real leaders, who care about the nation and would wrest control from the communists who have seized power, as the unions have in finding real leaders like the AFL’s Gompers, who oppose cheap foreign labor and want to protect American workers.

Neither bodes well for The Historic American Nation.

The author [Email him] is retired from the Border Patrol.