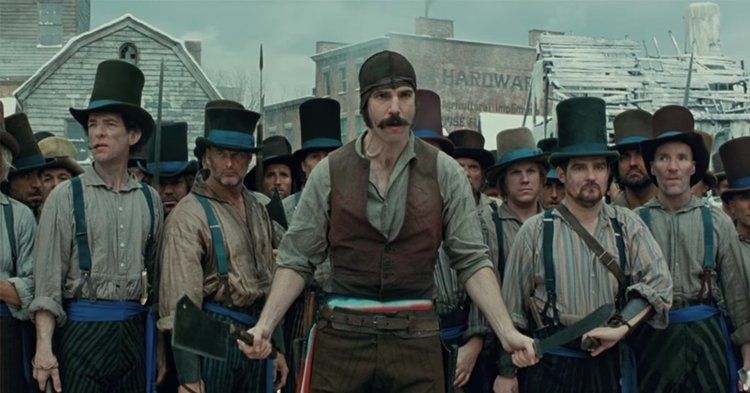 Ganging Up On America “America was born in the streets” is the tagline of the new Martin Scorsese film “Gangs of New York.” [trailer]

You thought America was born at Plymouth Rock?  Wrong!  Hollywood has decreed that America wasn't really born until the era of mass immigration.

The Scorsese film is based on Herbert Asbury's 1928 book, Gangs of New York. It conflates Asbury's chapter on “The Killing of Bill the Butcher” (Bill Poole, killed by one of Irish immigrant gangster's William Morrissey's gunmen in 1855—the killer was acquitted by a Tammany judge) with the later Civil War-era Draft Riots.

The book is worth reading, because you're not going to get an accurate picture from the movie.

Daniel Day-Lewis, a London-born Anglo-Irishman [i.e. Protestant] who is Irish identified and has often played Irish Catholics on screen, is Poole, the American-born villain, described as a “nativist.” Leonardo di Caprio, an American of Italian and German descent reprises his role as an immigrant Irishman from the hit movie Titanic, in which a providential iceberg prevented him from actually landing in New York.

“During the mid-1800s, hundreds of new Irish immigrants flooded the nearby docks daily in search of the American dream. What greeted them, however, was more boiling cauldron than melting pot. The Irish were largely shunned, particularly by the anti-immigrant "Native Americans," and viewed as outsiders who stole American land and jobs.”

Martin Scorsese says he's had an obsession with making this story, which he's been working on for 25 years. As Kim Masters wrote in Esquire:

“Getting Gangs of New York on the screen has turned into one of Scorsese's more painful and protracted obsessions. This story of so-called native Americans, actually the descendants of mostly Dutch and English settlers, and their resistance in the mid-1800s to the arrival of a great tide of Irish immigrants has fascinated him for years.”

The Draft Riots were a revolt by the immigrant Irish against Civil War conscription. The Irish, who were competing with native-born free black Americans for New York jobs, committed striking atrocities against them. Asked by American Enterprise magazine whether New York really had an “Irish problem,” Daniel Patrick Moynihan replied:

“Of course. There was a flood of immigrants from Ireland. Probably a third of them did not speak English. They couldn't do anything but laboring work, pick and shovel.

“The draft riots were the worst violence in the city ever. Burning a Negro orphanage! Mostly Irish instigated.”

Were native-born New Yorkers justified in being suspicious of the Irish immigrants who were taking over City Hall—making New York a byword for corrupt government even before they committed all these murders and tried to set the city on fire?

Of course, the chances of Liam Neeson, the “obsessed” Scorsese, or Daniel Day-Lewis sympathizing with the “native Americans” is quite low.

Day-Lewis was asked by UPI's Karen Butler (who apparently knows nothing about the different varieties of “Irishman”) if it bothered him to play the American villain who “murders an Irish hero (Neeson) and oppresses his Catholic followers, the Dead Rabbits?”

Day-Lewis said no—it was all "in the spirit of diversity."

I'd call this the frankest statement of the meaning of “diversity” yet.