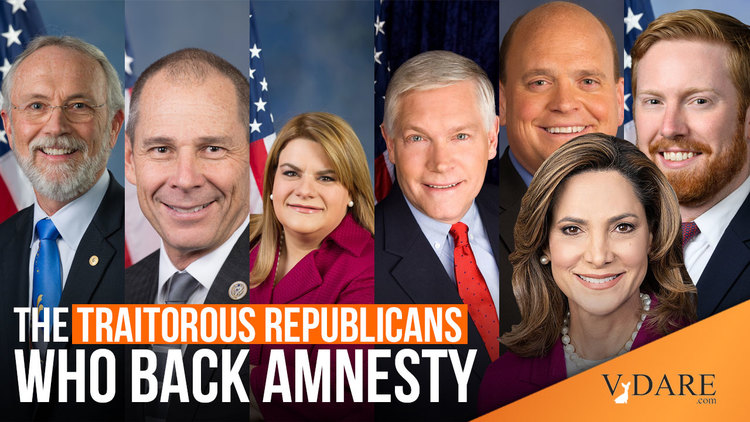 GOP Immigration Cucks Crawling Out Of Holes, Despite Massive Base Disapproval

Earlier: Republican Squishes Offer An Amnesty Of Their Own

President Biden and the Democrats have tried every way imaginable to pass Amnesty during the last year, but Republicans have, for the most part, refused to entertain this treasonous idea. That may be changing. Last week, some House Republicans proposed their own mass Amnesty and 17 Republican senators begged for more cheap migrant labor. Both developments run directly counter to the GOP’s planned relatively tough campaign stance on immigration in this year’s mid-terms. They also run afoul of what polls show the Republican base actually wants: LESS immigration, not more. The Donor Class and its lackeys still don’t get it.

The first sign of possible treason came from Florida Rep. Maria Elvira Salazar, a child of  a Cuban exile former reporter who worked at Telemundo, and a white  Conquistador-American, to use Steve Sailer's terminology. Salazar’s bill would give illegal aliens a pathway to citizenship, the imperative goal of the Democrats. The Biden Regime proposed an Amnesty last year, but—significantly—it offered no concessions to squishy Republicans who need promises of increased border security and enforcement mechanisms excuse their treachery. So Salazar’s bill adds in those concessions: it would increase funding for the Border Patrol, reignite construction of the border wall, and impose mandatory e-Verify. Illegals would also be required to pay “back taxes” and fees for 10 years to be eligible for a Green Card.

The United States has historically been a beacon of refuge for those fleeing violence and oppression or seeking a new life and opportunities. In recent decades, our broken immigration system has been exploited, leading to a situation that is unbecoming of our great nation. While the United States is a nation of laws, we are also a nation of second chances. Through dignity and a chance at redemption, this legacy can continue.

Quack, quack, quack. The “dignity” of American workers doesn’t matter, nor do they get a chance to compete fairly in a workforce against illegal-alien scab labor. Instead, they’re shafted to enrich Business First.

Salazar believes the bill will “diversify” the party. Ludicrously, she claims to be a Person Of Color. “I am a brown girl from the ’hood, who is a Republican, who is coming to tell my party that it’s time to wake up and smell the votes,” she reportedly told Stephen Miller at a 2021 GOP meeting [How 2 new Republicans want to reshape the GOP's immigration agenda, by Olivia Beavers, Politico, June 7, 2021].

In another typically ridiculous statement, she claimed that “we need” Hispanics to help the economy:

There’s a very big movement within the Republican Party understanding that this is the invitation letter for the browns, the Hispanics, the Latinos, you know, the largest minority in the country, welcoming them into the Republican Party, because we know that we need them in order to continue improving the American economy

No, “we” don’t need that. But unfortunately, six House Republicans, surprisingly including one with a strong career Numbers USA grade, agreed with Salazar’s idiocy and cosponsored her bill [GOP Rep. Salazar, Six House Republicans Unveil Amnesty Plan for Illegal Aliens, by John Binder, Breitbart, February 8, 2022]. They are:

Good news is, the bill has little GOP support. Nor are Democrats all that enthusiastic about it. While Salazar touts it as a bipartisan bill, no Democrats cosponsored it. The party is too committed to Open Borders to allow any concessions to weak Republicans. They don’t want increased border security, mandatory e-Verify, or, of course, the dreaded Wall. Instead, they want to legalize illegals and make it easier for more illegals to come so that they can Elect A New People. Anything less is “racist.”

Salazar’s bill will likely wither in obscurity. House Minority Leader Kevin McCarthy has pledged that if Republicans take back the House, the party would never allow Amnesty to come up for a vote. Salazar’s bill meets that criteria, although she claims it isn’t an Amnesty. No matter who’s in control of the House, the bill’s chances look very slim.

American businesses from industries such as tourism and hospitality, landscaping, fairs and carnivals, seafood processing, golf courses, reforestation, contractors and horse racing depend on seasonal employment to meet the demand across many industries. Without meaningful H-2B cap relief, many seasonal businesses will be forced to scale back operations, cancel or default on contracts, lay off full-time U.S. workers and, in some cases, close operations completely.

The 17 Republican signers and their career Numbers USA ratings:

This letter clearly has stronger support than Salazar’s bill. For one thing, it actually is bipartisan: more than a third of senators signed it. Second, the administration is already moving to increase foreign workers. The regular yearly intake of H-2B workers is 66,000. In January, the Department of Homeland Security announced an increase of 40,000. But these Senators want even more cheap foreign labor. Obviously, their corporate donors are very insistent.

These aren’t the only terrible immigration ideas the GOP might entertain. Last year, a fair number of House Republicans voted for two separate Amnesties: one for “DREAMers” (illegal aliens who supposedly came to the U.S. as minors) and another for illegal agricultural workers. Fortunately, Senate Republicans stopped that bill, but that doesn’t mean the cucks won’t try again.

Last summer, Republican Senators John Cornyn and Thom Tillis proposed a limited DREAMer Amnesty that would only be available to those who enlisted in Deferred Action for Childhood Arrivals. Democrats rejected the proposal. But now, after so many Democrat failures on their own Amnesty, they might be open to such an idea.

All of this conflicts with the GOP’s campaigning hard against Biden’s immigration disaster. Pretty much every Republican candidate is attacking Democrats for being weak on border security and illegal immigration [GOP zeroes in on Biden's immigration record ahead of midterm elections, by Priscilla Alvarez, CNN, January 14, 2022].

Nor are Republicans championing serious immigration reforms. Bills already exist to impose an immigration moratorium and end birthright citizenship, but they languish in obscurity.

Nevertheless, polls show that the GOP base, the Historic American Nation, wants the party to focus on those issues [Dissatisfaction With U.S. Immigration Level Rises to 58%, by Megan Brenan, Gallup, February 14, 2022].

Yet congressional Republicans are silent. And several GOP lawmakers side with the 3 percent minority against the vast majority of their party.

That can’t last. The polls are clear: Republican voters want less immigration, not more of it. Republican lawmakers had better listen.