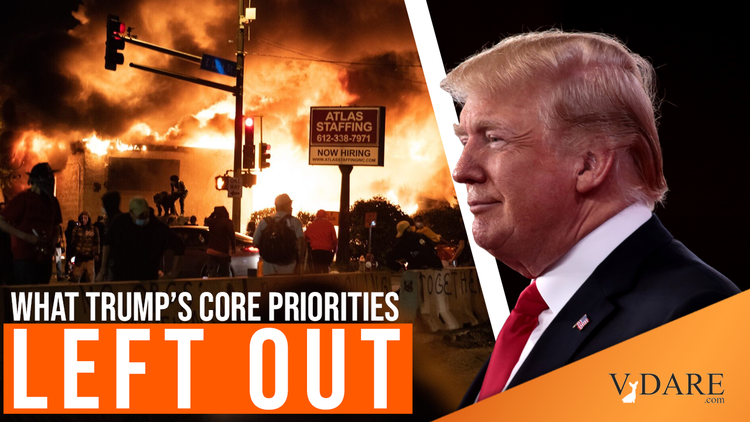 GOP Official Immigration Position Better Than Biden—Not As Good As Trump 2015. But Why Can't He Campaign On His Achievements?

The GOP did not write a new platform this year but instead reheated the 2016 platform (see below). The Trump campaign issued a supplementary list of “Core Priorities” which is blessedly free of the “Nation-of-Immigrants” eyewash of previous platforms and far superior to Joe Biden’s unvarnished immigrant-uber-alles platform. But, tragically, there is no longer any mention in the Core Priorities of reducing legal immigration or abolishing Birthright Citizenship. Having thrown these wedge issues away, Trump must do more to tout his immigration achievements—above all, the his (temporary) immigration moratorium and his dramatic reduction of the Immigrant Workforce Population.

First Son-In-Law Jared Kushner was reportedly behind the plan to nix a new platform, traditionally a major forum for grass-roots activists. He wanted a slimmed-down platform that would fit neatly onto one page and avoid divisive social issues that would appeal to social conservatives but infuriate those who seek a more homosexual-friendly agenda i.e., his New York social circle [Scoop: Inside the secret talks to overhaul the GOP platform, by Jonathan Swan, Axios, May 24, 2020]. Kushner’s solution: adopt the 2016 platform, then endorse Trump’s priorities.

These priorities do sound a little like the man we heard from four years ago:

And happily, in its statement attached to the reprise of 2016’s platform, the Republican National Committee says it “enthusiastically supports President Trump.”[PDF] That means his priorities are now the GOP’s.

Unhappily, Trump left out some things he promised but has left undone:

The campaign website includes a lengthy section on Trump’s immigration achievements, which mainly highlight his efforts to combat illegal immigration and to build (sort of) the wall. Oddly, however it does not include these significant victories, like curtailing legal immigration and an historic reduction in in refugee admission.

In his keynote convention address, Trump said he would protect American workers and attacked the Democrats for wanting to increase refugee admissions dramatically. But why did he not mention the temporary moratorium and strides in protecting American from cheap foreign labor? Both enjoy overwhelming public support.

Democrats would never think of blocking refugees or protecting American workers, so Trump’s omitting those ideas from campaign literature is inexplicable apart from one thing: Kushner and his pals in the GOP Ruling Class want to leave the door open to keep importing cheap foreign labor.

It must be acknowledged that, despite what’s missing, the Core Principles are a serious improvement over past GOP platforms. And they are particularly significant for what they don’t say.

Thus even the 2016 platform, written before Trump was nominated, included this cringe-inducing praise of immigrants:

Just as immigrant labor helped build our country in the past, today’s legal immigrants are making vital contributions in every aspect of national life. Their industry and commitment to American values strengthens our economy, enriches our culture, and enables us to better understand and more effectively compete with the rest of the world.

The 2016 platform also praised the immigrants in the military—lines cribbed verbatim from the 2012 (Mitt Romney) platform.

The 2016 platform did strongly denounce illegal immigration, pledge to reform the Guest-Worker program. And it did not call for an increase in legal immigration, unlike the 2012 platform, which promoted “Strategic Immigration” that would dole out more “high-skilled” guest-worker visas.

Other than that, the 2012 and 2016 immigration platforms were quite similar.

But the 2008 platform was a product of John McCain, an utterly repellent candidate. It included “embracing immigrant communities” and “welcoming refugees” as two of its key planks. “Today's immigrants are walking in the steps of most other Americans' ancestors, seeking the American dream and contributing culturally and economically to our nation,” declared the McCain platform. “We celebrate the industry and love of liberty of these fellow Americans.” America, as well, was a “multi-ethnic nation.”

Thus Trump’s brief statement of principles is a godsend that demonstrates his positive influence on the GOP, which without him would almost certainly be promoting more immigration, more foreign labor, and, most likely, Amnesty for illegal aliens.

Despite what’s missing from Trump’s Core Priorities statement, it is at least compatible with the spirit of his first immigration policy paper, [PDF] the one from August, 2015, that we reported as "Trump Posts Immigration Plan, Neocons Go A Little Crazy."

The Democratic alternative from Joe Biden is utterly insane:

No wonder this Treason Lobby blueprint is titled “The Biden Plan for Securing Our Values as a Nation of Immigrants.”

One of the Biden platform’s more truly insidious aspects: increasing chain migration. Biden would allow any approved applicant through family reunification to get a temporary visa until they receive a permanent visa.

“This is the equivalent to issuing temporary driver’s licenses to anyone who sends in an application,” the Center for Immigration Studies’ Jessica Vaughn told Breitbart. “The sky would be the limit … and besides blowing up the numerical limits on annual immigration [it] would be an enormous boost to the fake-document and fake-marriage industry” [Joe Biden’s Immigration Plan to Accelerate Chain Migration Inflow, by Neil Munro, Breitbart, September 1, 2020].

Tempting as it is to lash out at Trump, his Core Priorities list sends a clear message: Trump is the only one who will protect you and your job—and your nation—from foreign invasion.

Much as Kushner and the GOP Ruling Class don’t want to admit it, that’s the message Trump’s base, the Historic American Nation, wants to hear.

Trump knows that instinctively, of course. With just eight weeks until Election Day, it’s time to campaign like he knows it.