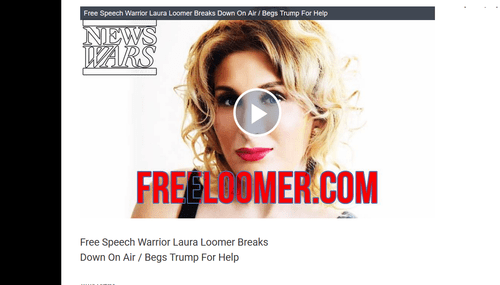 “I BEGGED PRESIDENT TRUMP TO DO SOMETHING BEFORE IT WAS TOO LATE!” Laura Loomer Appeals To Trump On Tech Totalitarianism (Which Also Threatens VDARE.com)

Mark Zuckerberg’s Facebook amped up its censorship this week when it announced it had banned an astonishing array of dissidents such as Alex Jones, Paul Joseph Watson, Louis Farrakhan, Laura Loomer, Milo Yiannopoulos, and other “extremists” from its platforms, which include Instagram. This Tech Totalitarianism coup against President Trump’s own supporters seems finally to have caught his attention—but the situation is now desperate and he must do more than tweet.

Facebook claimed all the banned individuals were too “extreme” and allegedly promote violence [Facebook bans Alex Jones and Laura Loomer for violating its policies, by Casey Newton, The Verge, March 2, 2019]. Incredibly. Facebook also said it would punish any users who dared to share InfoWars content and possibly ban them for this grievous sin.

Refreshingly, Trump spent most of Friday night and Saturday morning tweeting about this:

I am continuing to monitor the censorship of AMERICAN CITIZENS on social media platforms. This is the United States of America — and we have what’s known as FREEDOM OF SPEECH! We are monitoring and watching, closely!!

The support for me has been incredible. This could actually lead to some genuine change. Keep up the pressure. Don't let it rest. 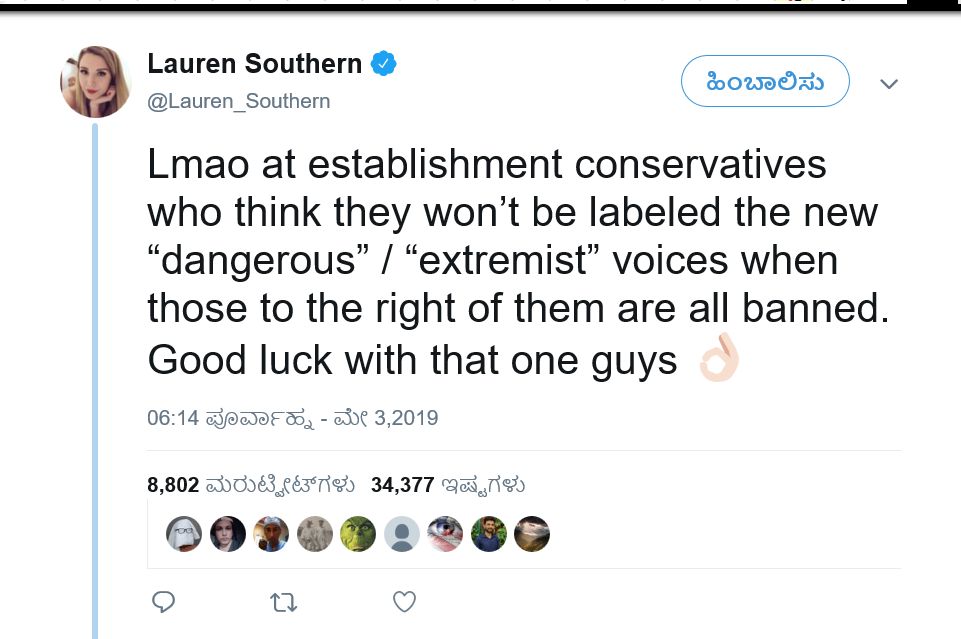 But even though Trump now seems concerned with this censorship, it’s still just tweeting. Patriots need concrete action. As activist Laura Loomer (who, let the record show, is Jewish and pro-Israel) explains passionately in this video, at 25 her life is ruined, her income is down 90 per cent, because she supported Trump from 2015.

What is Trump doing? The latest round of bans is an escalation and will encourage Big Tech to silence more voices if not met with action.

These moves follow Facebook’s announcement in March it would no longer tolerate “white nationalists.” That rule proved to cover a wide number of people and groups who do not identify as white nationalists, such as the American Identity Movement and VDARE.com contributor Faith Goldy. Now it appears that rule covers, Infowars, Milo and (weirdly) the Nation of Islam.

The ultimate goal of this censorship: to make sure anything like Trump’s election never happens again.

Whether Big Tech is blocking alleged “Russian bots” or taking a stand against “Hate Speech”—an offense unknown (as yet) to American law— it will invent any justification for censoring prominent nationalist voices. It wants to do what it can to ensure that Open Borders Leftists retain power and conservatives and nationalists are suppressed.

The justifications and scope of the ban should give everyone pause. When asked for specific examples for why some of these figures were banned, Facebook provided these insane reasons, according to The Verge ( a Vox spinoff, but even dumber ):

So mere appearances in videos with such dangerous figures as Gavin McInnes, or showing support for Tommy Robinson, a serious candidate for European parliament, opens you up to censorship.

McInnes and Robinson are undeniably public figures, yet the Tech Totalitarians want them entirely erased from their platforms. No one can dare to speak their name or share their image.

The other new and disturbing feature about the ban: the elimination of Infowars links and positive mentions of it. According to The Atlantic,

Alex Jones’ Infowars was already banned from Facebook, Twitter, and YouTube. Now you can’t even mention the site on two of the biggest tech platforms unless you condemn it. This is an explicit and blatant steering of political debate. It goes beyond banning and into the territory of Orwellian oppression.

Infowars will certainly not be the last outlet to suffer this fate. It’s just a matter of time before VDARE.com and other dissident publications are disappeared by Big Tech power.

But you’ll still have Ben (“Peter Brimelow is a white supremacist”) Shapiro!

Another thing to be noted: some of these figures used Instagram for entirely benign purposes. Watson’s Instagram mainly featured pictures of himself and his normal activities, not politics. Apparently even those photos are too offensive to be allowed.

Needless to say, this ban did not cover the extremely violent Leftist groups that use Facebook to spread their terroristic fantasies. They are still around and are not facing censorship:

This week’s censorship has inspired far greater outcry than past cases. But it will mean nothing without action.

The sad thing is that, as far as I can see: nothing is in the works in Congress or the White House to tackle censorship.

The Trump Administration had a rough draft of a tech censorship Executive Order last Fall. It was apparently scrapped after being leaked to the press. [White House Considers Draft Order to Look Into Google, Facebook, by Ben Brody & Jennifer Jacobs, Bloomberg,  September 22, 2018]

Senators Ted Cruz and Josh Hawley have offered ideas to curtail the problem, but have not yet offered them as bills.

Perhaps this recent outcry will prompt Cruz, a perpetual mediahound, into action. He has no better way to elevate his profile right now than to position himself as the lead fighter against Tech Totalitarianism.

Trump’s tweets are not sufficient. But they do put pressure on the Tech Oligopolists. There is a chance Facebook may reverse its decision on Watson, actor James Woods and a few others because of the President’s tweets. The tech giants do fear Trump and seek to curry favor with him. For example, Twitter’s Jack Dorsey recently met with the President to allay his censorship concerns. [President Trump meets with Twitter CEO Jack Dorsey after accusing platform of bias, by Oliver Darcy, CNN Business, April 23, 2019]

Additionally, while nothing seems to be happening on the legislative front, the legal front is active:

Paul Joseph Watson has promised to sue Facebook for defamation over the characterization he’s a dangerous extremist:

I have the best media lawyers in London looking over the Facebook issue. I am not an "extremist" or a "dangerous person" and won't be defamed as one.

Watson will be bringing his lawsuit in the U.K., which still actually has libel protection for public figures (unlike the U.S. since the Civil Rights Moral Panic). This lawsuit could set a positive precedent in tech policy. Tech Oligopolists may be forced to define what their exact guidelines are and have to prove those they block are actually violent extremists. No more arbitrary bans based on rules set by Outrage Mobs!

Another positive difference: the surge of black opposition to Farrakhan’s ban. Rapper Snoop Dogg told his millions of social media followers to flood their Facebook and Instagram pages with Farrakhan videos. This challenges Facebook actually to enforce its policy consistently [Snoop Dogg backs Louis Farrakhan, tells fans to support him: 'Show some love to a real brother', by Anna Hopkins, Fox News, May 3, 2019]

This pressure is good. But, again, it is no substitute for legislative or Executive action.

At the very least, Trump and his Congressional Republican colleagues must look at Section 230 protection and threaten to take it away.

The First Amendment will mean nothing if Americans aren’t allowed to speak freely in the public squares of the 21st century.

Which means President Trump will have no effective social media support in the 2020 election.

Washington Watcher [email him] is an anonymous source Inside The Beltway.