If The GOP Establishment Is So Smart, Why Isn’t It Winning 2014 Midterms (Without Obama’s Help)? 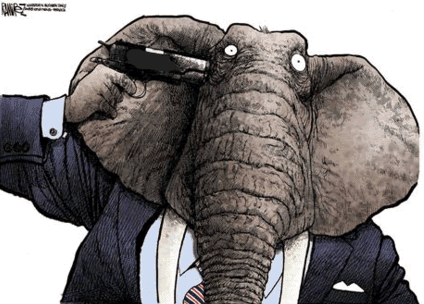 The 2014 GOP wave confidently predicted by party hacks after the Establishment’s string of ruinously expensive narrow primary victories is showing ominous signs of being just a ripple. No surprise: while the conventional MSM/ GOP consultant narrative blames “extremist” Tea Party candidates for recent defeats—ignoring the fact that Establishment candidates failed too—the reality is the Republican Establishment has a thirty-year history of blowing elections, basically because it fails to mobilize the party’s white base. Ironically, if the GOP does win this year, it may be because some candidates are finally mentioning immigration—and because the Obama Regime goes for Administrative Amnesty.

Signs of ripple are everywhere:

So where’s the wave? This is President Obama’s sixth-year-itch election. The map of states with contested Senate seats could hardly be better from the Republicans’ vantage point. And the breaks this year—strong candidates, avoidance of damaging gaffes, issues such as Obamacare and immigration that stir the party base—have mainly gone the GOP’s way, very unlike 2012.

Nonetheless, the midterms are far from over. In every single one of the Crystal Ball’s toss-up states, (Alaska, Arkansas, Iowa, Louisiana and North Carolina), the Republican Senate candidate has not yet opened up a real polling lead in any of them….GOP hopes in the Senate have been dashed in the previous four elections; if there’s a fifth this November, Republicans will have only themselves to blame.”

[Surf's Up| there be a GOP wave in the Senate—or a wipeout?by Larry Sabato, Kyle Kondik, and Geoffrey Skelley, POLITICO Magazine, August 25, 2014]

WASHINGTON - It's almost Labor Day, the traditional kick-off to the final stretch of congressional elections. And this was considered a pretty good year for the Republicans to take over the U.S. Senate.

And that, of course, would change Senate Minority Leader Mitch McConnell's job title to "majority leader," if he wins his own race.

Well, right now, there's no GOP wave out there, as far as some top analysts can see. Indeed, a Republican takeover of the Senate is not entirely a sure thing.

And yet the Republicans, people talk about a wave election, how is that going to happen? Are they sitting there really believing that the only or the best thing to do is to shut up and don't become targets and let the Democrats commit harakiri and, come November, people will vote Republican automatically 'cause they're so fed up with the Democrats? Is that what the thinking is?

… [I]sn't it ironic? The GOP, despite everything, is still depending on the Tea Party for a huge wave victory in November.

Can Anybody Find the GOP Campaign?, Rush Limbaugh.com, August 27, 2014

The GOP Establishment’s record of ruin began in 1988, when it regained control of the party after George H.W. Bush, lying through his teeth and running as Reagan III, won forty states and a larger share (53.5%) of the popular vote than any subsequent president. Pat Buchanan judged in Right from the Beginning that the “largest vacuum in American politics” in 1988 was to the right of Ronald Reagan. Yet in the years that followed, the Republican Party ran a series of corporate centrists who either blew winnable elections (George H.W. Bush in 1992, Bob Dole in 1996, John McCain in 2008, Mitt Romney in 2012) or won pitifully narrow victories (George W. Bush in 2000 and 2004). In the process, Kevin Phillips’s "Emerging Republican Majority" coalition that elected Nixon, Reagan, and (once) George H.W. Bush, was despised and allowed to disintegrate.

Now the GOP Establishment seems poised to replicate this record of failure, this time in the battle over the Senate. And, remember, the Establishment owns this election cycle, having waged war against its own base.

Republicans need six seats in order to retake the Senate, and they’ve already caught some lucky breaks, as when the Democratic candidate in Montana withdrew over a plagiarism scandal. [Democrats face a steep climb in Montana Senate race, by Harry Enten, FiveThirtyEight, August 7, 2014]

But with Obama’s unpopularity on the immigration issue, American foreign policy seemingly rudderless, and the economy stagnant, the real question is the same one as 2012—how does the GOP even have the potential to lose to these guys?

What’s happening? The GOP Establishment, by definition, is allergic to economic populism. Meanwhile, the Democrats have seized on it as a way to challenge Republicans on what should be safe territory. [Democratic Strategists prescribe populism to cure party ills, by David Lauter, Los Angeles Times, July 24, 2014]

As an illustrative example, let’s look at Mitch McConnell’s critical race in Kentucky. McConnell has a relatively positive record on immigration by GOP standards, though he’s fallen to the usual clichés like saying that the GOP is the “Party of Immigrants.” However, his favorability ratings in the state are terrible, and he is leaning heavily on the grassroots appeal of Rand Paul to get him through the general election. [How Mitch McConnell and Rand Paul became best buddies, by Paul Kane, Washington Post, August 5, 2014]

However, she is also posing as a populist, accusing McConnell of wanting “to ship our jobs overseas.” [Grimes, McConnell Hurl Insults At Annual Kentucky Free-For-All, by Eliot Nelson, Huffington Post, August 4, 2014]. Some Kentucky Democrats are slyly implying that McConnell’s marriage to former Secretary of Labor Elaine Chao “explains” why Kentucky jobs are “going to China,” to the indifference of the Main Steam Media. [In Kentucky, Elaine Chao Endures Racist Attacks From Liberals, by Ron Christie, Daily Beast, August 5, 2014]

As patronizing reporters note, the Democrats need socially conservative white workers to win this election. [The Coal County Contest that Will Decide the Senate, by Pema Levy, Newsweek, August 5, 2014]

Grimes’s entire campaign is simply about trying to fool them—and it might work.

As this race and others show, the GOP needs to connect immigration patriotism to other policies. It can’t just be about “opposing Obama.” Instead, they should co-opt rhetoric used by Democrats and talk about income inequality, trade, and support for American workers. David Perdue beat Jack Kingston for the GOP Senate nomination in Georgia by running against the Chamber of Commerce.

There is already an example—the of Senator Jeff Sessions, who has contrasted immigration patriotism to the Democrat/RINO support of corporate greed. Sessions is also running for re-election this year—and Democrats did not even bother to nominate an opponent.

The GOP has a priceless opportunity to follow Sessions’s lead and marginalize the Democrats for the next two years. But the Establishment, which sustains itself by promising electoral victory, apparently can’t do what must be done.

Thus Tennessee’s Lamar Alexander, after an unimpressive and expensive primary victory over immigration patriot Joe Carr in which he simply lied about his support for Amnesty, could not prevent himself from going back to supporting it.

And if the Establishment fails the historic American nation again this year—they should be forced to close up shop.

One good sign: a few GOP Senate candidates have mentioned immigration in this cycle—Tom Cotton in Arkansas, Scott Brown in New Hampshire (where the issue is widely credited with a recent poll showing the race tightening dramatically) and even Terri Lynn Land in Michigan.

Of course, although the GOP Establishment’s performance thus far is characteristically lackluster, it’s still early in the campaigning season.

But Obama seems to be going ahead anyway. Maybe he doesn’t like white liberals either.