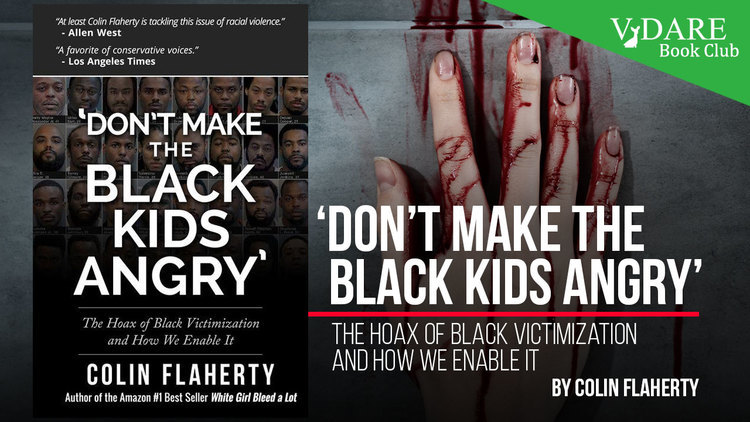 All polities rely on sacred myths that can’t be challenged without destroying the System. Colin Flaherty, who died prematurely this January, exposed post-America’s mythos in his 2015 book Don’t Make The Blacks Kids Angry: The Hoax of Black Victimization and How We Enable It. In his honor, I just discussed it, along with Paul Kersey, on the VDARE Book Club. (Sign up here.)

Flaherty’s work was especially impressive because the book wasn’t a carefully constructed thesis, but reported on news that the Ruling Class simply did not want Americans to know. It shows, rather than tells. Flaherty was one of those rare figures, an actual reporter. After losing him, it’s incumbent on everyday Americans to step up and report on what’s being done to our people and our cities if he’s to have any positive legacy.

This may sound conditional or cynical. You might be expecting some pabulum about how “Flaherty’s legacy will live on” or “the truth will win.” Yet Flaherty’s whole career rebutted such naïveté. On a shoestring, with no backing besides a loyal band of informers and supporters, he outperformed the entire national media when it came to exposing the devastating increase in black crime. This phenomenon shapes Americans’ choices about where to live, work, and send their children to school. But we cannot claim that his heroic work changed elite opinions about race. It will take more than truth to do that.

Instead, our rulers have fallen back even more fanatically on what are now openly religious myths about “whiteness” and white guilt. Indeed, on Easter weekend, the Pope himself, viewing the state of the post-Christian West, decided that the real problem is “racism” [Ukrainian refugees ‘treated differently’ to those from elsewhere; Pope Francis ‘we’re racist and that’s bad,’ South China Morning Post, April 15, 2022].

In this light, we should view Flaherty’s work not as a triumph, but as a challenge. We owe it to his shade to continue what he was doing and take it to conclusion. (VDARE.com’s Kenn Gividen has made a great start.)

That means confronting what Flaherty called “the biggest lie of our generation—“The idea that “black people are relentless victims of relentless white violence, often at the end of a badge–for No Reason What So Ever.”

It means dismissing these claims entirely, treating such charges with the intellectual respect one would pay the chittering of cockroaches or the howl of a rabid animal.

Such language may seem extreme, but compared to the relentless, endless, exhausting chronicle of black violence that Flaherty documented in this book, it’s probably far too moderate. Flaherty himself betrayed a sense of fatigue, noting that his book doesn’t so much end but is simply abandoned. “I have to stop somewhere,” he concluded. Yet the reports of violence simply keep coming, “and on and on and on.” Unlike the book itself, black violence simply “just does not stop.”

The book mostly consists of individual accounts of such acts, along with the ways that journalists shy away from telling the public what happened.

Take the case of “long-term and intense racial violence at the Country Club Plaza in Kansas City.” In response to residents complaining about violence and wanting a curfew, Congressman Emanuel Cleaver said “all we are going to do is make a lot of black kids angry and they are going to take out their anger somewhere else.” But if there is nothing to be done about such rage and the way blacks will “take out their anger” except to redirect it, there’s really no reason why white Americans should continue their centuries-long experiment in babysitting them [Michael Moore Is Right, Whites Shouldn’t Police Blacks, by Gregory Hood, American Renaissance, May 29, 2020].

Riots and violence in Kansas City in 2010 led then-mayor Mark Funkhouser to say he would stop it. He didn’t. In 2013, Flaherty reported, “local television stations showed groups of black people at the Plaza fighting, running from police, and creating mayhem,” in what the local Fox affiliate called “all too familiar now at the crown jewel of Kansas City, the Plaza.” Police responded with “community liaisons”; one black Flaherty quoted said the city should open up a place where “teens can party.” A reporter shrugged that the problem was “complicated.”

In September 2013, following yet another riot that required the SWAT team to use pepper spray, city government called for a “dialogue.”

But in fact, as Flaherty points out, “most of the newspapers and electronic media don’t permit comments on the topic of racial violence.”

Repeated black violence at the same location doesn’t spur the restoration of order. Instead, it leads to demands for more giveaways. Republicans are only now using the backlash against Critical Race Theory to get elected, but the time to stop CRT was a decade ago. “This is a good example of Critical Race Theory in action,” Flaherty said sarcastically of Kansas City. “White racism is everywhere. White racism is permanent. White racism explains everything.”

What’s perhaps most horrifying about this relentless chronicle of black criminality is that it probably understated the problem. Flaherty wrote:

Lots of crimes in black neighborhoods don’t get reported. Like gun fire. The ShotSpotter, an anti-crime technology that features an array of wireless microphones that can pinpoint a gun shot to within forty feet, is the ultimate crime detector.

The system is 96 percent accurate.

Using ShotSpotter, The New York Times reported that neighbors called police only 10 percent of the time that guns were fired in a high crime area of San Francisco. In Oakland, 22 percent of gunshots prompted 911 calls.

Extreme cases of gunshots, riots, and murders also understate the problem. More common cases of property destruction, black scorn for police, and chaos in schools arguably pose a greater threat to Americans’ standard of life. These problems, as Flaherty noted again and again, are consistently downplayed by local officials.

What is really occurring is a kind of slow-motion collapse. Seemingly separate incidents easily fit into a larger pattern.

In June of 2014, I did a podcast about it: F--k the Police: The anthem of racial hostility. I showed a video of hundreds of black people confronting police, flipping them the bird and singing F--k The Police. All together. And I talked to a Chicago cop: ‘When we pull up in South Chicago, we hear that song a lot,’ he said. “And they sometimes point their index finger at us as if they are shooting.

Steve Sailer noted just recently that journalists, including at the Chicago Tribune, tend to bury the race of murderers’ in their stories—assuming they even report on such crimes at all. Not surprisingly, crime in Chicago, notably carjackings, spiked heavily in 2019 and 2020. But why should police endanger themselves to stop it?

As Flaherty reported in 2015, the rot already went from city to city:

For a good chunk of middle America, Memorial Day means the Indy 500–the world’s largest sporting event. It also used to be the safest, until this year when one person died and others were hurt in several cases of black mob violence.

We learned about widespread violence, pepper gas, people trapped in boardwalk businesses, other businesses closing down, hundreds of phone calls to local officials, along with some video.

So much so that one of the local elected officials had to fess up. “Everybody wants to downplay it. . .  We were caught by surprise. We haven’t seen things like this for decades,” said Fort Lauderdale Commissioner Dean Trantallis.

[M]embers of the Midtown Greenway Coalition were suffering so many attacks while on bikes, they decided to start posting them at least for a while. They stopped in April 2013, after two black people threw a Molotov cocktail from a bridge, nearly hitting a bicyclist. They caught them. Then the real story begins…

[The Star Tribune stated in an article about the bomb throwers that] “’they may be too young to charge with a crime, a police spokesman said Thursday. ‘They’re at a real sensitive age,’ said Sgt. Steve McCarthy, who could only say the two suspects are not yet teenagers.’ And thus did the Stair Tribune preserve its unblemished record of ignoring, condoning, minimizing and denying racial violence in Minneapolis…

The Coalition stopped posting attacks after that.

Silence was a prominent theme of Flaherty’s book. Journalists, politicians, and police all felt the need to deny or downplay the extent of black violence.

It’s for this reason that Flaherty had to use a combination of gumshoe reporting, careful media research, and a largely informal network of sources to track down what was really happening in America. Now, with his death, silence takes on a terrible new meaning.

The book was more a series of dispatches, mixing and matching different incidents that were taking place in the later Obama years. Yet with hindsight, we see the beginning of a slowly dawning horror story, something akin to a zombie plague or an eldritch poison spreading over the land. The book looked positively naïve when it recounts gang attacks, “The Knockout Game,” black defiance of police and political correctness silently muzzling reporters. Today, after 2020’s mass riots, years of top-down censorship, and a staggering, sustained increase in crime, the troubles of the second Obama term seem positively idyllic.

The silence that Flaherty identified hurts more than ever as we need his voice now. Still, we can take away the simple, clear lesson this book teaches us. As Flaherty pointed out again and again, if you concede the premise that blacks are the eternal victims you eventually end up with overtly anti-white legislation, cultural vandalism against the Historic American Nation, and violence from those who don’t just feel emboldened but justified in what they are doing.

Flaherty’s book remains important not just because he clearly communicated this truth, showed what followed from it, and backed it up with facts. It’s important because its horror is but a shadow of the nightmare we dwell in now.

It follows that our current terrible situation will get much, much worse if more people don’t stand up to take Flaherty’s place.

Flaherty’s accomplishment is a challenge to all of us to fill the gap. Without many more like him, the past he uncovered through his fearless reporting will be just the precursor to the nightmare to come.

James Kirkpatrick [Email him | Tweet him @VDAREJamesK] is a Beltway veteran and a refugee from Conservatism Inc. His latest book is Conservatism Inc.: The Battle for the American Right. Read VDARE.com Editor Peter Brimelow's Preface here.