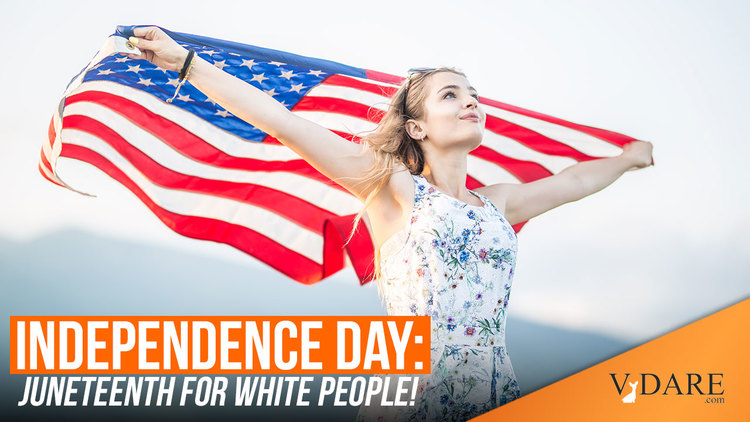 The recent kerfuffles over Juneteenth, Critical Race Theory, history teaching and what not have all been about one thing: black people refusing to admit that most of American history is NOT ABOUT THEM.

They’re part of the story, of course, starting in 1619, but it’s NOT ABOUT THEM.

George Washington may have owned slaves, but that was almost the least important thing about his career. Same for Thomas Jefferson. The American Revolution wasn’t about slavery and, in many ways, the Civil War wasn’t either. Like the current Cold Civil War, it was two groups of white people quarreling over who was to govern.

For example, white Southern Democrat Claire McCaskill, a representative of the Left, says she’s going to inaugurate a July 4 tradition of watching video of the Mostly Peaceful Protest at the Capitol on January 6.

Claire McCaskill wants a video? We recommend VDARE's 'CAPITOL "INSURRECTION" HOAX: How Our Lying Press Would Have Spun Jan 6 Protest If Trump Were A Democrat' https://t.co/UPUhfmTQ4i https://t.co/qIVdJw94ra

McCaskill is not doing this because she wants her family to see what actual patriots look like, but to maintain her hatred of certain white people, and to encourage the Capitol Insurrection Hoax Narrative.

Recently federalized Juneteenth is in effect a black Independence Day, and now-omnipresent “Lift Every Voice And Sing,” is known—unofficially—as the Black National Anthem. (It was the Negro National Anthem when I was younger.)

#Editorial: If you want a separate national anthem, you should leave and start your own country. https://t.co/hKUB5Snu2g

When slavery still existed, anti-slavery activist and escaped slave Frederick Douglass asked ““What to the Slave Is the Fourth of July?”” [Speech, July 5, 1852].

He said: “I am not included within the pale of this glorious anniversary!”

Slavery was abolished 13 years later, and full legal equality for blacks, in spite of massive resistance by un-Reconstructed Southerners, may have been said to have been achieved by 1965. But blacks apparently still don’t feel, or act,  loyal to the American nation, or any of its historic symbols—like, for example, the American, not the Confederate Flag.

First, They Came For The Confederate Flag—because it was allegedly a symbol of the legacy of slavery and whiteness, which in this case means the Historic American Nation.

Today, flying the American flag from the back of a pickup truck or over a lawn is increasingly seen as a clue, albeit an imperfect one, to a person’s political affiliation in a deeply divided nation. https://t.co/TODmHEmPsO

Now, they’re coming for the American Flag—because it, too, according to blacks and Woke whites, a symbol of the legacy of slavery and whiteness…which means, as I said, the Historic American Nation.

But if American patriotism, the kind of thing that Americans of all races should have been capable of supporting, becomes evidence of “whiteness,” that may awaken a realization among white Americans of just where things are going these days.

And on Independence Day, people who are grilling, shooting off fireworks, saluting the flag, or singing the National Anthem may, while they’re enjoying themselves, be tempted to say, paraphrasing Patrick Henry: “If this be whiteness, make the most of it!”

Last night at the VDARE HQ in Berkeley Springs. Celebrating America and the Fourth of July in style! pic.twitter.com/fgJ7YIVeNy

Happy Independence Day from your friends at VDARE.com!