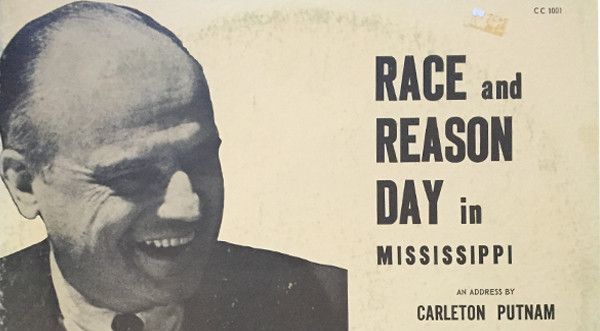 Carleton Putnam,  already very old, was living in retirement in Northern Virginia when I was on the staff of the U.S. Senate in 1979. A trickle of staffers, including some surprising names, would visit this forgotten but remarkable man—airline entrepreneur, scholarly biographer, brilliant polemicist.

When I was growing up, one of the books in my father's library was a slim, grey volume called Race and Reason: A Yankee View. I must have glanced at it dozens of times when I was searching the shelves, but I do not think I ever took it in my hands. My father never mentioned it, and I have no recollection of even wondering what the book was about, but I remembered its title.

I did not see another copy of Race and Reason until I was in my 30s, when it and its sequel, Race and Reality: a Search for Solutions, became important milestones in my slow divorce from conventional views of race. My life might have taken quite a different turn if I had read that old copy 20 years earlier.

The powerful, unorthodox arguments in this book made me wonder why it was even in my father's library. He was an egalitarian with no special interest in race, and it must have been the only racially heterodox book he owned.

When I asked him about it, he told me his father sent it to him in the 1960s, that my grandfather had been so impressed by the author, Carleton Putnam, that he bought copies of Race and Reason and sent them to all his children. My grandfather, therefore, was part of the great wave of Southern resistance to the racial revolution of the 1950s and '60s. Learning that my grandfather admired Putnam made me feel closer to both men.

Today, at a time when almost no one openly opposes the goals and assumptions of the Civil Rights movement, it is common to think there was no thoughtful, reasoned opposition to across-the-board integration. Today, anyone who fought to maintain Southern traditions can be dismissed as a frothing bigot. The images of resistance are always the same: whites snarling at the black students at Little Rock High School, officers clubbing blacks on the Edmund Pettus Bridge, police dogs snapping at demonstrators in Birmingham.

This caricature completely ignores the movements that sprang up to defend Southern traditions in courts, state houses, activist organizations, and in the pages of scientific journals. Groups now known mostly to scholars—the International Society for the Advancement of Ethnology and Eugenics, the Northern League, the Citizens Councils of America—attracted top scientists and leaders of their communities. This resistance, which undoubtedly represented the majority of Southern whites, had no more dedicated or eloquent a spokesman than Carleton Putnam.

Putnam, a proud Yankee descended from Revolutionary War general Israel Putnam, graduated from Princeton in 1924 and from Columbia Law School in 1932. Instead of practicing law, he built up a small California airline into an important carrier, Chicago and Southern, which became part of Delta Airlines in 1953. He served as chairman and remained on the board until his death in 1998.

Putnam was an admirer of Theodore Roosevelt, and in 1958 completed the first of a projected three-volume biography. Despite critical acclaim, Putnam set aside Roosevelt for something more important: fighting the racial egalitarianism represented by the 1954 Supreme Court decision in Brown v Board of Education. Putnam had no illusions about race, and recognized that forced integration would eventually displace whites and erode their civilization.

Putnam first stepped into the racial fray after Eisenhower sent the 101st Airborne Division to integrate Little Rock High School in 1957. His "Open Letter to the President" was immensely popular in the South, where it was reprinted in many newspapers. The Citizens Councils distributed it as a pamphlet, and it even appeared as a paid advertisement in the New York Times. [VDARE.com note: A great many facts about this era are available in a paper by John P. Jackson Jr. which is somewhat hostile to Putnam's thesis, of course, but otherwise informative. "In Ways Unacademical": The Reception of Carleton S. Coon's The Origin of Races, [PDF] Journal of the History of Biology 34: 247–285, 2001]  In 1961, he followed this success with Race and Reason, which remains to this day one of the most lucid, persuasive treatments of racial differences and what they mean for society.

Much of the work of the Southern resistance of 1960s is dated and mainly of historical interest; not Race and Reason. The calm, authoritative arguments that moved my grandfather are as persuasive as they ever were. Putnam never overstated his case or drove his conclusions beyond what the scientific data permit. His insights and parallels are as fresh today as they were 45 years ago.

It is no wonder that the book was a tremendous success. Although it is difficult to imagine such a thing today, Race and Reason was made part of the high school curricula in Mississippi and Virginia. Governor Ross Barnett of Mississippi even declared October 26, 1961 "Race and Reason Day," and invited Putnam to Jackson to give a major address. Putnam emphasized to his audience of supporters and politicians that it was futile to defend Southern traditions in the name of states' rights; that the race question had to be approached in straightforward, biological terms. It was science, not the Constitution, that would protect whites from miscegenation and chaos.

Putnam was such a force, and had so obviously captured the mood of the South, that academic associations felt compelled to condemn him. The first to do so was the American Anthropological Association which, in November, 1961, voted 192-0 to " repudiate statements now appearing in the United States that Negroes are biologically and in inherent mental ability inferior to whites." Putnam was the clear but unnamed target.

The next year the American Association of Physical Anthropologists voted to "deplore the misuse of science to advocate racism." President of the association and chairman of the meeting that passed the vote was Carleton Coon, who taught at University of Pennsylvania and was the author of The Story of Man and The Origin of Races. He and Putnam were kinsmen, and agreed on many matters. Coon asked how many of the assembled anthropologists had read the book they were condemning; only one raised his hand. Later Coon wrote: "There they were, some of them old and trusted friends, apparently as brainwashed as Pavlov's puppies . . . . I told my fellow members that I would no longer preside over such a craven lot, and resigned from the presidency."

From this point, Putnam threw himself into a campaign to overturn the Brown decision. In his view, the Supreme Court had based its decision on faulty information: blacks and white were not equal, and segregation did not harm blacks psychologically. He was convinced that if the facts were put before federal judges, they would use their talent for sifting the evidence, and expose the Supreme Court's error.

Accordingly, he played a key behind-the-scenes role in the 1963 case of Stell v. Savannah-Chatham Board of Education, which did exactly what Putnam had hoped for: a blue-ribbon panel of scientists—Henry Garrett, Frank McGurk, Robert Osborne, Ernest van den Haag, Wesley Critz George, and Robert Kuttner, under the direction of Georgia lawyer R. Carter Pittman—presented an overwhelming biological and sociological case for segregated schools.

Judge Frank M. Scarlett duly found that the Brown decision had been based on incorrect facts, and that it was a reasonable use of state power to separate students on the basis of race. The NAACP appealed the decision to the Fifth Circuit, which declined to join Judge Scarlett in overturning a Supreme Court decision. The appellate court noted that the Supreme Court had already found segregated schools unconstitutional, and told Judge Scarlett that his job was to determine whether schools were segregated and to integrate them if they were, not to justify segregation.

The Pittman team appealed this reversal to the Supreme Court, which refused to intervene. The challenge to Brown that had begun so hopefully was dead.

This was a great disappointment to Putnam. "The appeal to truth, the levy upon honor, had failed," he remarked. Since judges had shirked their duty, he concluded, it would be up to scientists to put the facts before the public. He spent much of the rest of his life in correspondence with scientists and other prominent figures, trying to awaken them to racial differences.

In 1967 Putnam wrote a companion volume to Race and Reason, entitled Race and Reality: a Search for Solutions. This, too, was popular in the South, but by then everything Putnam held dear was disintegrating. With the Civil Rights Act of 1964, the Voting Rights Act of 1965, and the Immigration Reform Act of 1965, America had lurched violently into racial folly from which it has yet to recover.

Already in Race and Reason, Putnam had recognized the power of modern mass media. He warned against "those who influence public opinion most," pointing out that "such men are responsible to no electorate and can keep on slanting news and warping the public mind long after the statesman in a similar position would have been retired." He wrote with the express purpose of counteracting this menace.

Ultimately, it was Carleton Putnam's love for the nation and civilization of

his forebears that drove him to take up an unpopular cause, and this love shines through the pages of his book.

He had no disdain for other races; only the desire that his beloved country continue on the path that had made it great. He was convinced—and helped convince me—that to turn our backs on the wisdom of our ancestors is to invite catastrophe.

"To alter the foundations on which a house is built is a doubtful way to preserve it," he wrote. "Let us continue building, let us extend the foundations, but let us not change rock to sand."

Jared Taylor (email him) is editor of American Renaissance and the author of Paved With Good Intentions: The Failure of Race Relations in Contemporary America. (For Peter Brimelow's review, click here.) You can follow him on Parler and Gab.