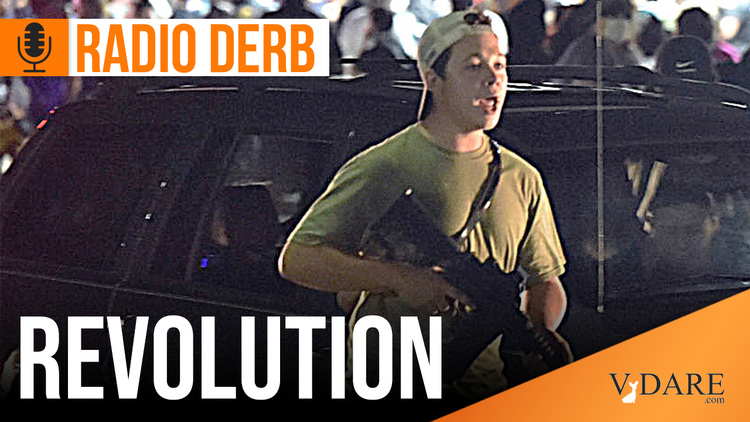 John Derbyshire: From Wisconsin To Washington D.C.—"Our Culture And Way Of Life" Under Attack

Wisconsin got a visit from the Antifa mob following the shooting in Kenosha of a criminal suspect, 29-year-old Jacob Blake, who is black. The cops had been called on Mr. Blake for reasons now disputed. He'd arrived at some kind of sidewalk kerfuffle in his car, left the car and got involved somehow, and the cops were called.

Mr. Blake, for whom an arrest warrant was out from last month, was keen not to be arrested, so he ignored the orders of the cops, kept moving after being tasered, and reached into his car for…something.

The cops naturally feared he was reaching for a gun. So one cop shot him seven times in the back—which, Blake being faced away from him, half in the car fishing for something, was the only place the cop could shoot to disable him.

Mr. Blake survived the shooting, but may now be permanently paralyzed. The cop who shot him is white: 31-year-old Rusten Sheskey, a seven-year veteran of the force [Officer who shot Jacob Blake identified, By Victoria Albert, CBS, August 27, 2020].

Mr. Blake has six children, three of them by a lady named Laquisha Booker ['Do Jacob justice and examine your hearts.' Excerpts from a news conference with Jacob Blake's mother, sisters and father, Milwaukee Journal Sentinel, August 27, 2020]. These three were in the car's back seat when he was shot [Jacob Blake’s fiancée says he was shot in front of kids ‘for no reason,’ by Yaron Steinbuch, New York Post  August 25, 2020].

We haven't been told anything about the other three, or what Mr. Blake does for a living.

It's a miserable story, but I can't see, watching the video, how the cops could have acted any differently. Should they have waited to see what Blake was reaching into his car for before shooting him? I wouldn't have. (Post-mortem investigation disclosed a knife on the floor of the car.)

It's a rough deal for Mr. Blake. But his behavior was seriously stupid. In this world, stupidity comes with a price, sometimes a high one.

It's a rough deal for his kids, too. But that's on him. He should have co-operated with the cops. The misfortune of those kids is to have a willfully stupid dad with no respect for the law or its enforcement.

To the anarchist mobs and their supporters in the Main Stream Media / Democrat Establishment this was of course another case of leering Bull Connor-type white racists working their evil will on a helpless black man begging for mercy. Kenosha (population 100,000, ten percent black) got the full treatment: burning, looting, and mayhem.

Are there really that many rabid, street-fighting anarchists in Kenosha? Probably not: But Chicago is only fifty miles away, and while these mobs are anarchists, modern social media make organization and mobilization irresistibly easy even for anarchists [Kenosha police find helmets, gas masks, more in out-of-state vehicles; arrest 9, by Nick Viviani, NBC15, August 27, 2020].

There is a nationwide network of these rioters now, egged on by their supporters in the Establishment, in the Main Stream Media and social media, in Hollywood, in the sports world, in the universities. They are enabled by hands-off mayors, governors, DAs, and prosecutors.

Abe Greenwald [Tweet him] has an opinion column in the September issue of Commentary magazine titled Yes, This Is a Revolution:

As Thomas Paine said approvingly of France in 1791, "it is [an] age of revolutions, in which everything may be looked for." A mission so grandiose demands the most radical assault on the current order, and changing the world begins with changing one's country. So it was in France in 1789, Russia in 1917, and China in 1949. And this is especially so if one's country is seen as the seat of the present evil and is also the most powerful nation on the planet. This is, then, most fundamentally a revolution against the United States of America and all it stands for.

Eight years ago our boss here, Peter Brimelow, wrote that:

Twice in the last year, I have been told, quite casually and spontaneously, by perfectly responsible adults, one an older woman, that all this—America's ongoing immigration crisis and the resultant balkanization—will come to blood.

That was at roughly the same point in the 2012 election cycle that we are now at in the 2020 cycle. Barack Obama was elected to his second term a few weeks later, and the healing began … not.

Four and a half years later, after witnessing the massively under-reported (not to mention massively under-prosecuted) disturbances at President Trump's inauguration, Peter was persuaded:

We're facing what was called in the case of the Civil War an irrepressible conflict.

But this is America. People have guns. It will come to blood.

And so it has.

Up to this week, however, guns have not been much in evidence; and the blood shed has been that of people who tried to stand up to the anarchist mobs—people like Adam Haner, kicked in the head by an anarchist in Portland on August 16th, or retired police officer David Dorn, shot dead by a looter during anarchist riots in St Louis [St. Louis man arrested in fatal shooting of retired police officer David Dorn, by Theresa Waldrop, Gregory Lemos and Kay Jones, CNN, June 8, 2020]. 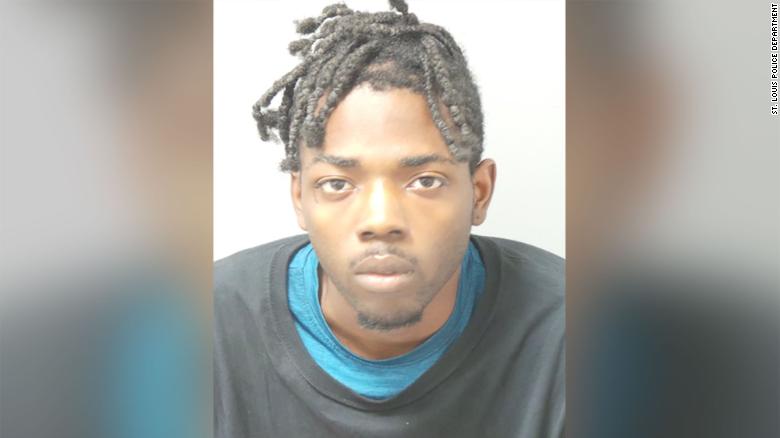 But this week we saw the beginnings of counter-revolutionary violence. Monday there was shooting at BLMers marching from Milwaukee to Washington, D.C. As they passed through Bedford, Pa. (population around 2,600), there was an exchange of gunfire. One of the anarchists took birdshot in the arm. It's not clear who started the shooting.

Tuesday night three anarchists were shot in Kenosha, Wisconsin, two of them fatally, by 17-year-old Kyle Rittenhouse, using an AR-15 rifle. The sequence of events:

That account is from a published report by employees at the New York Times [Tracking the Suspect in the Fatal Kenosha Shootings, by Haley Willis, Muyi Xiao, Christiaan Triebert, Christoph Koettl, Stella Cooper, David Botti, John Ismay and Ainara Tiefenthäler, August 27, 2020]. Given the total control of the New York Times by its woke staffers, as illustrated in the Tom Cotton / James Bennet affair, I'm guessing those employees will soon be ex-employees, and whichever editor saw their findings into print will be an ex-editor.

It so happens that I spent midday Wednesday at my local range, re-learning for the fifteen-hundredth time what a lousy shot I am with a rifle. Back home that evening, watching the video clips then being posted of Rittenhouse shooting Huber and Grosskreutz, I confess that my first reaction was: "Nice shooting!"

I mean, Rittenhouse was sprawled on the ground in an awkward posture and, I am sure, scared out of his wits. He none the less got off four shots, killing one anarchist and badly winging another.

All right, the range was close. But I'm still impressed.

The local authorities, like their counterparts in Minnesota, Oregon, Washington State, and pretty much everywhere else, are on the side of the revolutionaries. They have smiled benignly at the rioting, looting, and arson, but have thrown the book at young Kyle Rittenhouse.

There are also some lesser charges—two counts of first-degree recklessly endangering safety—just in case the more serious ones can't be made to stick, which of course they shouldn't be.

I bet they will be, though. Our Woke prosecutors and judges are merciless with counterrevolutionaries. Young Kyle will likely end up with four hundred years in jail, like James Fields.

Still, the counter-revolution is under way, and these were its first shots. As a peace-loving patriot, I wish I could believe they'll be the last.

I truly wish I could.

The week's other headliner has been the Republican Party's nominating convention.

In common with many, many other Republican voters—including the millions who pushed Donald Trump through the 2016 primaries in the teeth of opposition from Rubio, Kasich, Jeb Bush, Huckabee, and the rest—I don't much like the Republican Party, and positively loathe quite a lot of their leading figures.

But I'm a tad more hopeful than I was a week ago that Trumpism may have a future, with the GOP as its home. Even if I'm wrong and the GOP is not turning towards Trumpism, it's at least turning away from Bushism.

I think I did the right thing. There was pretty general agreement that Trump's speech was way too long. Editor Peter Brimelow regrets the apparent abandonment of legal immigration reduction.

The President did, though, remind us that he had personally scotched the plan by the Tennessee Valley Authority to bring in cheap foreign employees on guest-worker visas and fire a corresponding number of American workers, after first making the Americans train their replacements on pain of no severance pay [Fact Check: Trump Saved TVA Workers’ Jobs from Being Outsourced to Foreign H-1B Workers, by John Binder, Breitbart, August 27, 2020]. I'll thank him for that.

After the event, Macchio Tweeted:

What President @realDonaldTrump⁩ & the 1st family did for me tonight is something I’ll never forget. They stood & listened in regal nobility as I performed with tremendous love & pride in my heart for a nation grateful for their commitment to saving our culture & way of life. pic.twitter.com/DsmyOmbnqy

Who did the Democrats have to sing out their convention—Cardi B, was it? I forget.