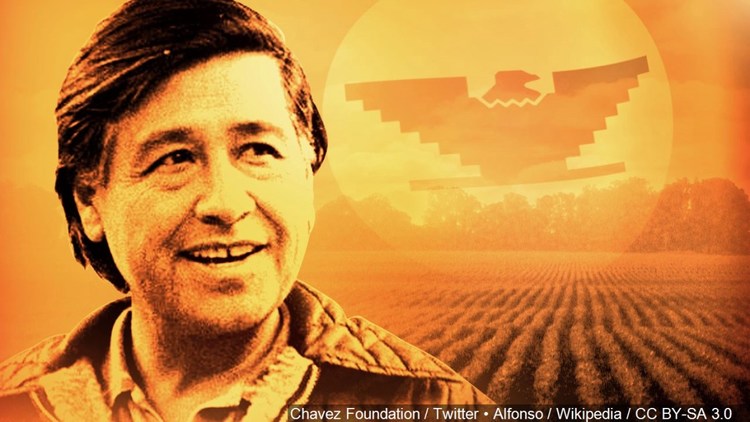 Well, I suppose that's a better way to memorialize Chavez than letting the kids hang out at the mall. But we can be confident that the propaganda fed the students will portray him the way the Chicano verbalist elite prefers: as the patron saint of the reconquista of Alta California by La Raza.

The truth about Chavez is much more interesting. A third-generation American citizen from Yuma, Arizona, he was first and foremost a labor leader, as crafty and sometimes ruthless as any effective union boss must be. Today, Mexican-American educators and politicians have one simple priority: more immigration. Every warm body with a brown skin increases their clout. But, then and now, union leaders have the opposite need. The UFW's essential problem was the same as all other unions', straight out of Econ 101. Chavez needed to limit the supply of labor in order to drive up wages.

From this grew the fundamental conflict of his life. Was he an American class warrior or a Mexican mestizo racial activist? What came first: La Causa or La Raza? This irresolvable dual identity culminated in the terrible irony of his tragic last dozen years.

Chavez's success at bringing better wages to stoop laborers in the early Seventies stemmed from the long-term decline in the pool of available migrant farm workers. According to agricultural economist Philip L. Martin of UC Davis, migrant farm workers in the U.S. numbered 2,000,000 in the Twenties. But the U.S. government started to crack down on Mexican illegal immigrants, most notably during 1954's "Operation Wetback," when a million were loaded onto railroad cars and shipped home. By Chavez's heyday in the early Seventies, there were only 200,000 migrant farm workers left. Which made his triumphs feasible.

In his prime, Chavez fought constantly against illegal immigration. He frequently complained that the Immigration & Naturalization Service wasn't tough enough. When Chavez would lead a strike, the grower would send trucks across the Mexican border, load them up with scabs, and race back to the Central Valley in the dead of night. Chavez even offered his UFW staffers to the INS to serve as volunteer border guards to keep Mexicans from sneaking into California. As Ruben Navarrette Jr. reported in the Arizona Republic: (8/31/97)

"Cesar Chavez, a labor leader intent on protecting union membership, was as effective a surrogate for the INS as ever existed. Indeed, Chavez and the United Farm Workers Union he headed routinely reported, to the INS, for deportation, suspected illegal immigrants who served as strikebreakers or refused to unionize."

Successful unionization typically leads to management investing in mechanization, which in the long run drives down the number of workers. In fact, United Mine Worker boss John L. Lewis would explicitly proclaim that he wanted to drive miners' wages up so high that his union would be much smaller in the next generation. If his members were paid enough today, they could afford to educate their kids to do something less miserable with their lives by the time the bosses had figured out how to do without them.

During the Seventies, a similarly benign outcome appeared to be inevitable for American stoop laborers. The inflated wages paid Chavez' members would impel mechanization, which would eventually turn this literally backbreaking job into merely a painful memory.

It didn't happen. In fact, stoop labor wages stagnated in nominal terms from 1981 onward. In other words, over the last dozen years of Chavez's life (he died in 1993) real wages for migrants fell. As workers stopped paying dues to an organization that couldn't deliver, the UFW withered to a fraction of its former size.

Why? No doubt California's 6,000,000 public school students will be told that it was all the fault of the evil Republican governors who reigned from 1983-1998, those divisive anti-immigration racists like Pete Wilson. Chavez's memory has been used so many times by Chicano intellectuals and politicians to insist on the moral necessity and practical inevitability of la reconquista that few remember who really sank the UFW: Mexican immigrants, hundreds of thousands of them.

The lure of higher wages; the Mexican economic catastrophes of 1976, 1982, and 1994; the fraudulent 1986 immigration "reform;" and a loss of will among white elites to defend the nation's borders has lead to a huge increase in the number of migrant farm workers in America. Since somewhere between 30% and 60% are illegals, the exact number can only be guesstimated. Dr. Martin pegs it at between 800,000 and 900,000, a rise of at least fourfold since Chavez's glory days.

The rotten pay and working condition suffered by today's migrants is all just a matter of supply and demand. The government can pass a lot of regulations, but if there are enough desperate job seekers on the spot to undercut their fellow workers, it won't matter. For example, growers now evade labor laws by turning their workers into subcontractors, although in truth they are just old-fashioned sharecroppers.

Lax federal enforcement [of existing labor and immigration laws] has amounted to a tremendous subsidy for fruit and vegetable growers, one that has distorted the economics of those industries.

"Cheap labor benefits agriculture in the short run," Martin argues. "But it also helps to blind farmers to the technological changes they will have to make in order to compete with foreign producers, who have access to even cheaper labor." As long as the United States tolerates the employment of illegal immigrants in agriculture, Martin believes, the farm-labor market will continue the endless cycle in which farm workers quit for better jobs and illegals arrive to replace them. "We have essentially privatized the immigration policy of this country," Martin says, "and left it in the hands of California's growers."[ In the Strawberry Fields, pay archive PDF]

But, somehow, I don't think California's students will learn much of this.