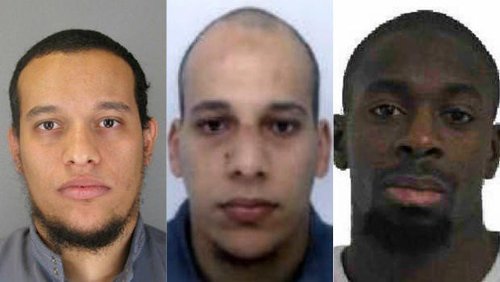 Picture from: How the French [sic] terrorists were connected to al Qaeda, ISIS, by Bob Orr, CBS News, January 9, 2015.

It didn’t take long for our President to blame the French people for the Islamic terrorist attacks that shocked the world. Barack Obama told the Europeans that they must do more to integrate Muslims and avoid “respond[ing] with a hammer.” [Europe needs to better integrate Muslim communities: Obama, AFP, January 16, 2015] In fact, of course, contemporary Europeans would do very well to remember the example of Charles Martel, “Hammer of the Franks,” who saved Europe from Islam at the Battle of Tours.

But Obama is right that the Islamic question in Europe won’t be solved simply through law enforcement or military action. What he would never admit: it must be solved by action on immigration—and repatriation.

Why would any country in its right mind want Muslim immigration, or immigration from predominantly Muslim countries? It really shouldn’t take dead bodies to shock people into thinking clearly about immigration. But c'est la vie, as the French would say.

The French terrorists were a diversity twofer—both racially and religiously “diverse” in that they weren’t of either European or Christian stock. Though they were born in France, they couldn’t be considered “French” except in a technical legal sense. They owed greater allegiance to an increasing Islamic diaspora community than to the French nation.

Therefore the ultimate question, which absolutely no mainstream American commentators have raised; how can we, lawfully and humanely, reduce the number of Muslims in the West and so reduce the source of the problem?

The late Lawrence Auster, editor of View From The Right, pointed towards a constructive policy in two speeches, at an Act for America meeting in New York (January 25, 2010)

Muslims in large numbers do not belong in any Western society. It was a mistake to let them in, and now we have to recognize that mistake and find ways to start reversing that immigration.

But how do we “reverse” any form of immigration? The very mention of reversing immigration would require political courage unseen in America.

Or would it? There are actually laws on the books that allow for the robust deportation of a non-citizen who is “engaged in or is likely to engage in” terrorist activity.

Suggesting how effective these laws can be, ACLU Executive Director Anthony Romero has bemoaned how “the U.S. government unfairly deported thousands of immigrants after the September 11 attacks—simply because they were from Muslim countries and were in the wrong place at the wrong time.” And were illegals, of course. [New ACLU Report Documents Devastating Effects of Post-9/11 Deportations on Immigrant Communities and Families, ACLU press release, December 8, 2004.]

While the current administration is obviously not going to use these laws, a future Republican President (so long as it’s not Jeb Bush) could quite easily.

In other words, non-citizens got the justice they deserve.

Immigration courts have lower standards of proof and relaxed rules of evidence. They can process deportations more quickly than criminal charges, filing which can actually delay deportation.

But what is the justification for using them? In Auster’s speech, he spelt out the logic of Islam’s political ambitions:

If Islam is a nation, and they think of themselves as a nation, well the jihadists are the soldiers of this nation. And the regular members are the civilians…. The civilians are not on the battlefield, they’re not waging war, but they are still part of the nation in whose name and on whose behalf the warriors are waging war.

If Auster was correct, many Muslims will inevitably support the Islamic “Ummah” rather than the country where they reside. When non-citizens agitate for a group like the Islamic State and support soldiers of the “caliphate,” they can be deported.

Of course, aside from insisting on deportation, Congress needs to repeal and replace the wretched 1965 Immigration Act.

But some of those who consider themselves spiritually part of another nation are technically American citizens. Even if we deported every dangerous immigrant we might still be left with Dearbornistan if we are not willing to try to repatriate the Muslim population as such. As Auster noted,

Any activism which tries to deal with the symptoms of the problem but accepts the existence of the problem itself is ultimately in my view a losing game. If we accept the presence of Islam in the West we’re just going to be foot dragging as they gain more and more power.

Auster’s 2009 and  2010 speeches deserve close attention. His riveting conclusion describes the fundamental role of immigration in the story of Mohammed’s rise to power in Medina. Muslim immigration itself is the problem, and the rest of the topics surrounding Islamic terrorism (assimilation, alienation, free speech, etc.) are only symptomatic.

After the Charlie Hebdo attacks, voices from across the political spectrum—with a number of PC exceptions—verbally joined in generic outrage. But they’re not rising up against immigration. They’re not rising up against the process that brings the ungrateful Muslim minorities into their nations to begin with. Instead, commentators are claiming solidarity with a principle of free speech that they don’t even really believe in.

But if they don’t deal with the Muslim problem, Westerners of whatever political opinion will eventually be rendered powerless and their opinions will no longer make any difference. 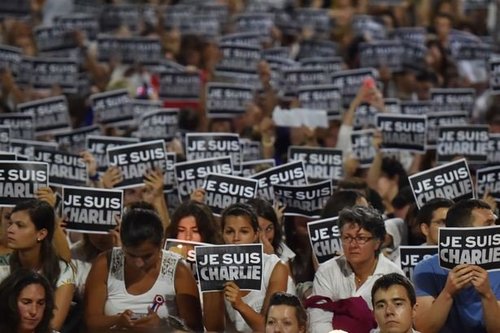 Solidarity means nothing if they continue to allow Muslim immigration

Picture from: Could Twitter be the downfall of terrorists even if we're not really all Charlie?, by Brian Reade, Daily Mirror, January 9, 2015

The inevitable future attacks will provide further opportunities for treasonous politicians to pretend to care. For instance, the disgusting Lindsey Graham talks tough about the role of Islam in the French attacks. [Lindsey Graham: France Attack Shows We're In A Religious War, by Amanda Gutterman, The Huffington Post, January 7, 2015] But we know Graham would never do a thing to limit the number of Muslims entering our country—and would condemn efforts by Europeans to do the same.

Nevertheless, the attacks in Paris have opened up space for real debate. There is finally public debate on the growth of what the Washington Times describes as “virtual Islamic mini-states” in France. [Muslims segregated from French society in growing Islamist mini-states, by Rowan Scarborough, January 7, 2015] In a surprising turn of events for the Washington Post, one of its reported on “Europe’s far right” without any references to Nazis, racism, or guilt. [Europe’s far right on the Paris attack: We told you so, by Adam Taylor, The Washington Post, January 8, 2015]

But few are discussing the actual solution. Conservatism Inc. bluster about wars, or cheap talk about freedom of speech, only distracts from the imperative of banning Islamic immigration and working to repatriate those who are within the West. A “strong” foreign policy is irrelevant when immigration brings the threat to us. The West needs to confront Islam as a demographic problem, not as a military problem.

Lawrence Auster’s approach can serve as a baseline. And if the so-called “counter-jihad” movement takes it seriously, preserving the Occident from the existential threat of Islam just might be the legacy Auster leaves behind.