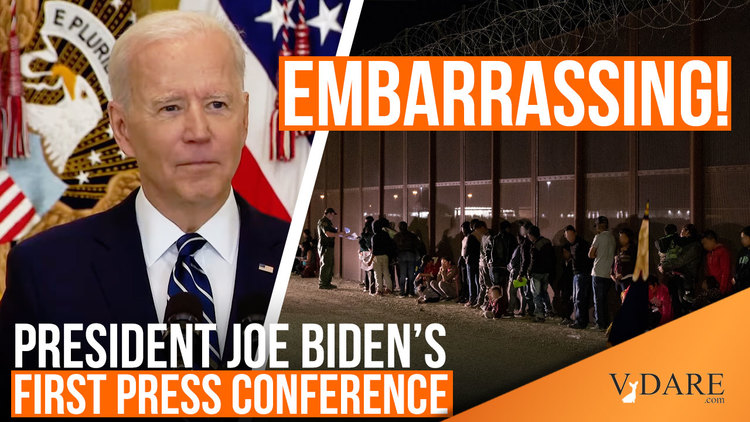 Let’s Face It, The Biden Administration Is Just Anti-White

President Joe Biden lied about the border crisis in his first press conference on March 25. He claimed it was no crisis at all and the surge occurs every year. He blamed Donald Trump for all the problems and insisted no “migrants”—Regime-speak for illegal aliens—are getting through [Biden calls border situation normal, by Ursula Perano, Axios, March 25, 2021]. This underscores the Regime’s alarming commitment to Anarcho-Tyranny: the chaos at the border is nothing to worry about—the real problem is white America, and that’s what requires law enforcement’s attention. GOP lawmakers must face the truth about the Biden Regime: it’s an Anti-White enemy of the Historic American Nation.

Biden’s performance at the press conference was embarrassing. Maybe he was joking when he said he entered the Senate 120 years ago, but he constantly had to look down at his staff-written notes for even the most basic questions [Biden seems confused at times during first official press conference, by Emily Jacobs, New York Post, March 25, 2021]. Of course, Regime Media journalists didn’t hit him with any tough questions. In the most bathetic moment, NPR’s Yamiche Alcindor—herself the daughter of Haitian immigrants—told Biden he was elected because he’s a “moral, decent man,” and that this is why so many illegals are now coming here! Biden said he was flattered but that he’s not responsible for the Biden Rush (which he says doesn’t exist anyway) [Compliant Corrupt Taxpayer-Funded Media Ask If He’s Just Too ‘Moral’ And ‘Decent,’ by Tristan Justice, The Federalist, March 25, 2021]. The president also claimed the “vast majority” of illegals are sent back except for helpless children [Biden Falsely Claims Migrants Are ‘Not Getting Across Border,’ by John Binder, Breitbart, March 25, 2021].

But this is, to coin a phrase, Fake News. The Biden Regime has released over 23,000 illegals since February. Two-thirds were released in March, indicating that the Regime is only growing more lenient [Joe Biden’s DHS Frees 23.4K Border Crossers into U.S. in Two Months, by John Binder, Breitbart, March 24, 2021]. Many were not even issued a court date [Border Patrol in Rio Grande Valley Releasing Illegal Crossers into US Without Court Date, by Griff Jenkins and Yael Halon, Fox News, March 21, 2021]. One Arizona border town has declared a state of emergency in response to the invasion [Arizona town declares 'state of emergency' over border crisis, by Joseph Choi, The Hill, March 24, 2021].

Biden’s response is not to crack down at the border. Instead, he’s begun to ask Mexico to do the job for him, while taxpayers foot an $86 million dollar bill to put migrants in hotel rooms [ICE Securing Hotel Rooms to Hold Growing Number of Migrant Families, by Stef W. Knight, Axios, March 20, 2021]. Federal officials are converting detention facilities into “processing hubs” to release even more illegals [Texas Family Detention Centers Expected to Transform into Rapid-Processing Hubs, by Maria Sacchetti, Washington Post, March 4, 2021]. This is all happening while they know we face a massive border surge that will not abate anytime soon. A recent Gallup survey found that at least 42 million Latin Americans want to come to the United States [42 Million Want to Migrate to U.S., by Jim Clifton, Gallup, March 24, 2021].

But while Biden dismantles immigration enforcement, the real threat to the country, in the eyes of Biden World, is white “terrorists,” not foreign invaders.

Homeland Security secretary Alejandro Mayorkas, himself an immigrant Cuban Jew, emphasized these twisted priorities in his Sunday show circuit last weekend. “The message is quite clear: Do not come. The border is closed. The border is secure,” he told ABC’s Martha Raddatz. But he did not promise additional resources or tougher enforcement at the border. Instead, he pledged more DHS resources to crack down on anti-Asian “hate crimes.” He even said he was pressuring tech companies to censor more:

We are working with the office of Civil Rights and Civil Liberties in addressing the challenges with the social media companies to ensure that we stop the violence that is born of ideologies of hate [DHS head to migrants: 'The message is quite clear, do not come', by Luke Barr, ABC News, March 21, 2021].

This is the same man who’s overseen the administration’s dismantling of immigration enforcement. Mayorkas implemented the DHS guidelines that bar Immigration and Customs Enforcement from deporting a whole range of criminals and limits the agency’s ability to detain alien criminals when they’re released from prison. He also wants to take ICE officers off the street and chain them to desk jobs to further reduce deportations. Officials say these actions would effectively abolish ICE.

But Mayorkas takes a very different approach when it comes to what he calls “far-right extremists.” He promised to dedicate his department to this imaginary menace in a recent op-ed:

I have designated domestic violent extremism as a National Priority Area for the first time, and will require state and local governments to spend 7.5 percent of their DHS grant awards combating this threat. In practice, this means state and local governments nationwide will spend at least $77 million to prevent, prepare for, protect against and respond to domestic violent extremism.

Mayorkas also pledged to spy more on Americans and undermine free speech. According to Mayorkas, speech he doesn’t like is “violence” and a crime:

Some domestic extremists, however, use the banner of the First Amendment to disguise their attempts to incite and engage in violence. Inciting others to commit violent acts is a crime. The Department of Homeland Security will use its authorities to counter the threats posed by this violence.

[How my DHS will combat domestic extremism, by Alejandro Mayorkas, Washington Post, February 25, 2021].

This response is all brought about by a few hundred Trump supporters walking around the Capitol without permission, exactly like the Kavanaugh protestors in 2018 (except that they were attacked by Capitol Hill police). This, not hundreds thousands of people flooding our border, is the real threat.

It’s worth noting the distinction the Biden Regime makes between those who illegally entered the Capitol versus our border. Trump-supporting Capitol protesters remain in jail indefinitely and face serious federal charges, even though their worst crime was snapping a selfie in Nancy Pelosi’s office [Where is GOP Outrage Over Justice Department’s Capitol Probe?, by Julie Kelly, American Greatness, March 25, 2021].  MS-13 gang members, on the other hand, can expect a nice hotel room and an expedited release if they illegally cross the border. They don’t even need to worry about a court date.

Under the Biden Regime, illegal aliens have more rights than patriotic citizens. Not a single Biden official cares about the border, but every single one of them is concerned with “white nationalism” a.k.a. Trump supporters.

At a time when any sensible administration would push Congress for border security funding, the White House does no such thing. Instead, the Administration demands Congress pass the “COVID-19 Hate Crimes Bill.” This act would outlaw “offensive” ways of speaking about the virus and empower Leftist bureaucrats to push for more dubious “hate crime” charges. It would do nothing to solve the problem of anti-Asian attacks, because it wouldn’t increase law enforcement or keep dangerous black criminals locked up. It would just enlarge the federal bureaucracy and threaten free speech [Biden supports the COVID-19 hate crime bill, by Erin B. Logan, Los Angeles Times, March 19, 2021].

At the same time, the national murder rate is way up, Antifa lays siege to the Pacific Northwest, and race riots loom over the Derek Chauvin trial. Things will get much worse on Biden’s watch as summer approaches.

The administration also showed its colors in response to recent mass shootings. When a white gunman killed eight people, including two whites, at Atlanta massage parlors, the president cried racism and said anti-Asian hate must end. But when a Muslim immigrant gunman murdered 10 white people in a Boulder, Colorado grocery store, Biden just called for gun control. Thus he only focused on gun control in one of the cases—the one that undermined Leftist myths about mass shootings. He completely ignored imported Muslim terrorism. He also chose to visit Atlanta; he does not plan to visit Boulder [Biden pushes House-passed gun reforms in the wake of Colorado mass shooting, by Kevin Liptak and Jeff Zeleny, CNN, March 23, 2021].

All of which a perfect opportunity for a champion of the Historic American Nation to emerge. Millions of Americans want a new Trump to come forth and defend strong borders, law and order, and free speech. They’re sickened by the anarcho-tyranny of the Biden administration, as evidenced by the declining number of Americans who back Amnesty [73% of Voters Concerned About Border Crisis, Majority Oppose Amnesty, Rasmussen Reports, March 15, 2021].

But it requires more than mere rhetoric to prove. GOP leaders must haul in Mayorkas and other Biden officials and grill them on their twisted priorities. They must propose bills to solve the border crisis and restore proper law and order. And they must defend their own voters from the long arm of Leftist tyranny.

Biden’s America means pampered illegals and jailed patriots. It must be defeated.