The past and much-anticipated future riots in Ferguson, Missouri aren’t spontaneous civil disorder—they are an example of how the U.S. is governed in the multicultural, post-American age. Undeterred by the Trayvon Martin farce, the Main Stream Media, professional racial activists, and Obama’s Justice Department are implacably committed to the story that police officer Darren Wilson murdered “Gentle Giant” Michael Brown, regardless of the facts. And the riots widely predicted if Darren Wilson isn’t indicted are less a protest against police misconduct than a ginned up attempt to ensure black voter turnout. It’s not a protest against the system—it’s the system working as designed.

We’re certainly getting enough advance notice of the riots. Michael Brown’s aunt is promising that Officer Wilson will “feel and see the wrath of God’s vengeance come… in a mighty way, just as he promised all who do evil in his sight.” [Brown’s Aunt Warns Officer Wilson Will ‘Feel the Wrath of God’s Vengeance,’ CBS St. Louis, October 22, 2014] Oddly enough, the usual suspects eager to mock Christianity when it is expressed by white conservatives seem silent about these Westboro Baptist-type promises of divine retribution. 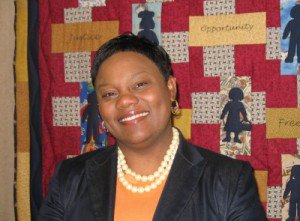 Protestors are vowing that if there is not an indictment, “all hell is going to break loose.” This includes professional racial profiteers like Amy Hunter [Email her] “racial justice director” of the YWCA St. Louis. Hunter (pictured right) coos that

Everybody is planning for whatever the grand jury decides… Certainly there are lots of us that are planning peaceful protests should it not be indicted. Certainly there are other people that have other ideas at hand. [Tensions Rise After New Michael Brown Shooting Details Are Released, CBS St. Louis, October 21, 2014]

What those “other ideas” entail, only Ferguson small business owners can know for sure.

The riots in Ferguson never really stopped—they just transitioned into a permanent campaign by extreme Left activists. “Ferguson October” is the latest attempt by several organizations to capitalize on and continue social unrest. And these organizations are exactly what you expect— a grab bag of explicitly anti-white and anti-American groups like the New Black Panther Party in alliance with various Palestinian solidarity organizations, Socialist splinter groups, and MSM-approved “moderates” like the NAACP.

The MSM’s willful blind spot is vital to this movement’s success. Remember, patriotic protests are regularly sabotaged by reporters who play guilt by association, smearing protests because of the attendance of “extremists” the MSM doesn’t like—even to the point of playing guilt by association with no actual association.

However, when it comes to anti-white or anti-American movements, the participation and even leadership of protests last summer by openly racist and anti-Semitic figures such as Malik Shabazz of the New Black Panther Party was calmly excused and even praised by “mainstream” outlets. [No headline can prepare you for Infowars’ Live Ferguson Coverage, by Matthew Phelan, Gawker, August 19, 2014]

Nor were any eyebrows raised about the sponsorship of groups like the “Universal African Peoples Organization,” which receives fawning coverage from the National of Islam’s Final Call and praises the late Black Nationalist mayor of Jackson, Mississippi, Chokwe Lumumba as an example to follow. [Universal African Peoples Organization celebrates 25 years of service, by Saeed Shabazz, Final Call, April 10, 2014]

Whites who wanted to attend a baseball game suddenly found themselves confronted by screaming protesters. If they expressed anger against the people rioting in defense of looting and lynch mob justice, fans suddenly found themselves labeled as “ugly” by clickbait-seeking pseudo-reporters. [Cardinals Fans Get Ugly In Clash With Ferguson Protestorsby Tony Ley, Deadspin, October 7, 2014]

Protests have continued at sporting events, featuring blacks shrieking obscenities and spitting on and attacking whites. One white man who tried to save an American flag that was being waved upside down was attacked. Needless to say, the MSM decided this was simply a “brawl.” [Rams fans and protesters brawl after game, by Anthony Kiekow, Fox St. Louis, October 20, 2014] 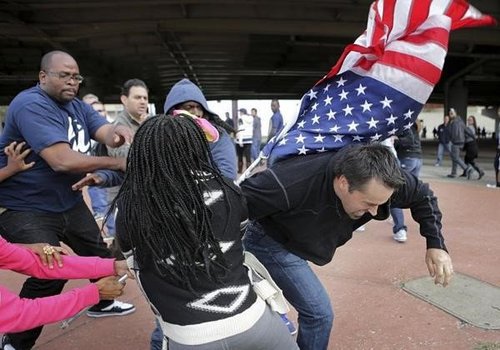 A few days later, protesters in St. Louis decided it would be a good idea to burn the American flag.

These kinds of tactics come out of Rules for Radicals, the now-legendary handbook of social agitation penned by professional agitator Saul Alinsky. A great deal of Alinsky’s tactics focused on disrupting the routines of the “white middle class” by preventing whites from escaping what author Paul Kersey has termed the “Black Undertow,” the chronic crime and dysfunction of black “communities.”

For example, Alinsky famously suggested that a group of a 100 urban blacks attend a symphony after a three-hour preconcert dinner at which they would be fed nothing but baked beans—with obvious disruptively flatulent consequences throughout the performance, a tactic that “connected with their hatred of Whitey.” (p. 141)

Alinsky also suggested blacks protest in white neighborhoods because whites were so racist that they would cave to any demands in order to keep their neighborhoods white. (p.144)

Of course, the reality today is these kinds of racially driven protests pit “one aggressive, unified side against an opponent that is totally unable to articulate a defense for itself, or even see itself as a side at all,” as Radix’s Michael McGregor puts it. [The One Sided Battle, October 14, 2014] Either way, the effect is the same—whites will not be allowed to escape.

The irony is that all this is happening as the martyrdom of Michael Brown is suffering complete Narrative Collapse.

What’s more, some of the protesters and even Michael Brown’s family members can’t keep themselves out of trouble. One Jamilah Nasheed, a black Democratic state senator, was arrested in Ferguson for failure to obey police officers and refused a breathalyzer after officers smelled “intoxicants.” She was also carrying a 9mm pistol and ammunition—which is legal under concealed carry laws but ironic because Nasheed usually votes against gun rights. [Just Guess What Ferguson Police found on Missouri Democrat Who Has Sponsored Several ‘Anti-Gun’ Bills, by Jason Howerton, The Blaze, October 21, 2014]

And Michael Brown’s family is providing unintentional comedy, as his mother, cousin, grandmother, and several others reportedly engaged in a violent brawl over $1,400 of revenue from selling Michael Brown T-shirts. This culminated in Brown’s cousin being struck in the face with a “metal pipe or pole” and going to the hospital. [Police investigating assault and theft following argument between Brown family relatives, by Chris Hayes, Fox 2 News, October 22, 2014]

Nonetheless, the Department of Justice is doubling down on the Brown story, condemning leaks from the Grand Jury investigating Darren Wilson. [Justice Department condemns Ferguson leaks as effort to sway opinion, by Matt Pearce, Los Angeles Times, October 22, 2014]. And the fact that the prosecutors in the Grand Jury may take the “unusual” step of not recommending a specific indictment means that the door is open for Darren Wilson to be hit with a lesser charge like involuntary manslaughter in order to satiate the mob. [What the Ferguson Leaks Tell Us About Michael Brown’s Death, by Alex Altman, Time, October 23, 2014]

Furthermore, the Democratic Party is shamelessly using the Michael Brown shooting to promote black turnout, for example in the close Georgia Senate race. The Democrats are essentially suggesting to black parents that Republicans want to shoot their children.

And, in what will surely delight white commuters who were forced to move away from Atlanta, protesters blocked traffic on the Downtown Connector. Needless to say, no one was arrested. [Protesters temporarily block Downtown Connector, by Ben Gray and Jon Gargis, Atlanta Journal-Constitution, October 22, 2014]

The truth is that such leniency reflects the larger reality that the American political system is now utterly dependent on anti-white race baiting.

A media which can’t be troubled to expose the massive lawbreaking of the Obama Regime audaciously promotes stories about white racists hunting down innocent “black bodies” even though these morality plays are revealed to be a hateful lie time and time again.

A vast assemblage of “nonprofit” organizations and “anti-racist” campaigns survive on whipping up racial hysteria, even as the supposed communities they claim to speak for merrily butcher each other in formerly American cities like Chicago.

And the Democratic Party, beset by Ebola, foreign policy disasters, and voter anger at immigration lawlessness, now relies upon anti-white racism as the core of its program, memorably described by one Republican Congressman as a “War on Whites.”

A real government would actually try to maintain public order and enforce the law with ruthless coercion when necessary. Unfortunately, we are ruled by racial socialism. Promoting hatred against the historic American nation and demanding handouts is a feature, not a bug, of our system of government.

As the late Sam Francis described, the Ruling Class actually benefits from social dysfunction, and so there is no reason to believe this will end anytime soon.

The only question is what will end first—the United States itself, or the historic American nation’s toleration of what has become an enemy occupation.