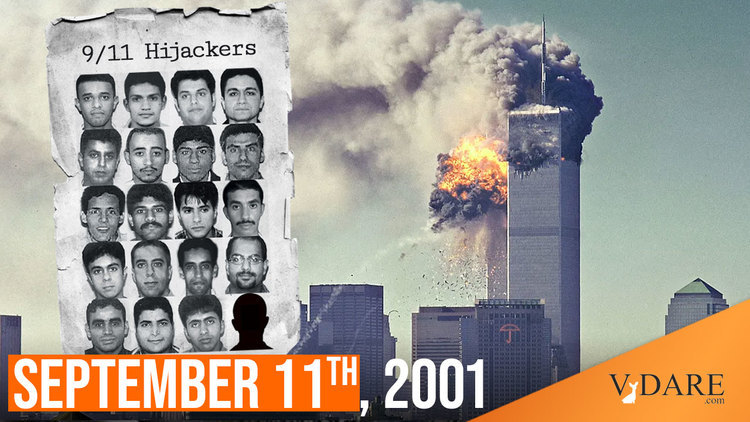 The two had first gone to the US as illegal immigrants nine years ago. Asked how they managed to come back to India without valid papers, Ayub's family said, "This could only be answered by Immigration officials."

The specter at the gruesome banquet that terrorists served the United States last week is mass immigration and the irresponsible policies toward it that America and its leaders have followed for the last 30 years. It is a specter no one—from the President of the United States to any expert interviewed by the media during the last week—even bothers to mention. Yet whatever the government and American society do to stop further terrorist attacks will be largely useless unless the immigration specter is confronted. Because of American and Israeli foreign policy, two vast subcontinents in northern Africa and the Middle East have been turned into enemy territory where a culture of anti-American hatred and terror have blossomed. Even in those Arab countries that are more or less still our allies, the public condemnations of last week's attacks on the World Trade Center and the Pentagon were qualified. Almost all condemned the acts of terror, but almost all, at the same time, condemned America for the policies that led to the attacks. "Injustice leads to injustice," one Muslim leader told his listeners on the West Bank.

And what has been bred in northern Africa and the Middle East will be imported into this country when natives of those regions immigrate. That should be obvious enough from the biographies of the 19 men who hijacked the planes last week. Some may have been American citizens; others legal residents, and some perhaps illegal aliens. But the point is that no matter how they got here, what they brought with them was the hatred that drove them to mass murder.

It is all very well for public leaders to assure us that most Arab Americans and Muslims are loyal and law-abiding. There's no doubt that's true. It's also true that most Arabs and Muslims outside America are not terrorists. But the larger truth that Americans need to grasp is that by allowing a vast subculture of non-Western immigrants to emerge within our own society, we have permitted the creation of an alternative social structure in which terrorists can move virtually undetected.

The Washington Times, trying to grapple with the problem of a culture within a culture, carried a story this week about a loyal and law-abiding Muslim cabdriver from Morocco, a gentleman named Habib Aitelhoussine, whom the Times described as "fully Westernized in his blue Izod polo shirt and Adidas sweat pants." For all Mr. Aitelhoussine's lawfulness, you might as well describe Genghis Khan in a business suit as "fully Westernized."

Being "fully Westernized," being a genuine part of the West, has nothing whatsoever to do with what kind of clothes you wear or even what language you speak. The West, if it has any meaning at all, means Europe and its people as they existed from around the time of Charlemagne and their cultural extensions like the United States, Canada, Australia, and New Zealand. The characteristic belief-system of the West is Christianity and a view of man and the universe derived from or closely related to it, and only those whose minds and habits incorporate that world-view are part of the West. Even so-called "secular humanism" and Marxism share elements of it and the ethic it implies. Islam, a great and in many respects admirable faith, simply is not part of it, and those who subscribe to Islam and its civilization are aliens, regardless of their clothes, their professions or their places of residence.

The claim of the open borders lobby—that non-Americans and non-Westerners can immigrate to this country and overnight become part of our nation and our civilization simply by assenting to a "creed," an "idea" or a "proposition"—has now been shattered. The 19 suicide terrorists came here, went to school, mastered Western technical skills like flying a jetliner, spoke English, had families, got drunk in bars, ogled girls in the swimming pools, and behaved in superficial ways exactly like the Americans they pretended to be. In fact they hated every man, woman, and child they laid eyes on; they hated them in some cases for years; and they were willing and eager to die to satisfy their hate. They were and remained enemies of the West.

We can bomb Afghanistan and every Arab or Muslim country in the world all we want; we can suspend the Bill of Rights and turn the CIA into a reasonable facsimile of Murder Incorporated; we can wage war abroad until we drop from exhaustion. But until we control our own borders and know that a significant ethnic minority within our own population is not at best alien to and at worst a sworn enemy of our own people and civilization, we should have no illusions that we are going to win any war against terrorism.