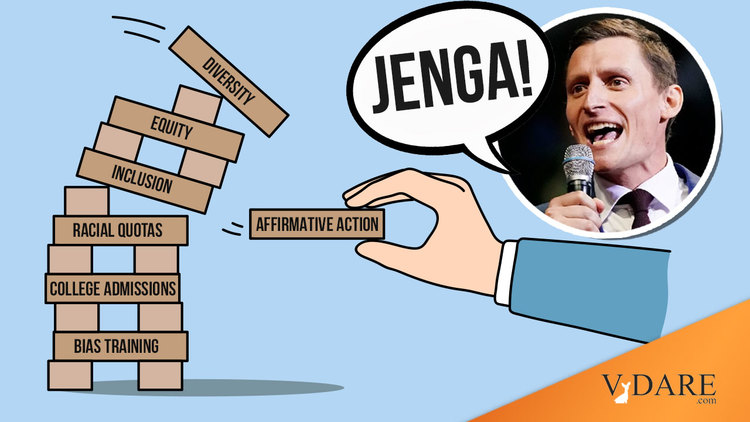 Earlier, by Peter Brimelow (1993): When Quotas Replace Merit, Everybody Suffers

Arizona Senate candidate Blake Masters has a new campaign pitch: End Affirmative Action. He tossed this issue into the race after he was attacked for mocking the federal government’s strategy to tackle inflation with more diversity at the Federal Reserve. Instead of backing down or apologizing, he punched back even harder. Maybe he knows something most Republicans don’t: Ditching legalized anti-white discrimination might be just what’s needed for the GOP to win back the demographic most negatively affected by it—college-educated whites. Republicans rarely raise the issue. But with anti-white discrimination increasing in education and in the workplace, Masters’ pitch is a smart and necessary appeal.

This may be the most successful appeal to the white ”invisible victims” of Affirmative Action since the late Jesse Helms’s famous (and much whined about by cucky Republicans) ”white hands” ad.

The story that Masters highlighted shows the problem with the Affirmative Action regime. In a typical Regime Media puff piece about the federal government’s response to inflation, the Associated Press fawned over the Fed’s increasing diversity: “There are more female, Black and openly gay officials contributing to the central bank’s interest-rate decisions than at any time in its 109-year history.” AP didn’t explain, of course, how increased diversity would reduce inflation, but it still claims it’s providing new perspectives that will make the Fed much better [Fed Tackles Inflation With Its Most Diverse Leadership Ever, by Christopher Rugaber, August 27, 2022]. Tweeted Masters, “Finally a compelling explanation for why our economy is doing so well.”

Finally a compelling explanation for why our economy is doing so well https://t.co/Ub2CeiyjCs

The video, particularly the comments about Harris, incensed the critics even further. But it appears they won’t receive an apology or retraction any time soon [Blake Masters Has a Lot of Thoughts About Black People, by Matt Stieb, New York magazine, August 30, 2022].

Masters’ latest move proves he is one of the best candidates, if not the best candidate, of this election cycle. He is one of the few Republicans to advocate restricting legal immigration. He’s made immigration a central part of his campaign and openly discussed The Great Replacement. He’s one of the few Republicans to dare attack Critical Race Theory for what it truly is—anti-white racism. And he’s probably the only Republican candidate to notice the color of crime. That too sent MSM Leftists to the fainting couches.

His war on Affirmative Action is smart because it’s a wildly popular idea. A Pew Research Poll found that 74 percent of Americans believe race or ethnicity shouldn’t factor in college admissions [U.S. public continues to view grades, test scores as top factors in college admissions, by Vianney Gomez, April 28, 2022]. In 2019, Pew found that 74 percent of Americans prefer companies to hire on merit and exclude racial considerations—even if it results in less diversity. A 2018 NORC survey found that 72 percent of Americans oppose giving preference to blacks in hiring and promotion to rectify past discrimination [Affirmative Action and Public Opinion, by Frank Newport, Gallup, August 7, 2020].

Despite that, corporate America openly discriminates against whites…and brags about it. Examples abound. Thus Brian Netzel, a former employee for American Express, sued the company because it “gave preferential treatment to individuals for being Black and unambiguously signaled to White employees that their race was an impediment to getting ahead in the company” [American Express Slapped With Lawsuit Alleging Discrimination Against White Employees, by Jon Brown, Fox News, August 24, 2022]. Similarly, Pfizer recently announced a work fellowship that explicitly excluded whites. Last year, Coca-Cola, which had told employees to be “less white,” made and then rescinded a demand that its outside law firms ensure that 30 percent of their lawyers are non-white [No Whites Allowed: Pfizer Fellowship Flagrantly Violates the Law, Lawyers Say: The ‘Breakthrough Fellowship’ prohibits whites and Asians from applying, a restriction that is ‘flagrantly illegal,’ by Aaron Sibarium, Washington Free Beacon, August 27, 2022].

And these are just the known cases. Just imagine all the unwritten discrimination against whites in the workplace, especially after George Floyd’s death.

Discrimination is also worsening in college admissions. Several elite schools now have freshman classes where whites are a minority. Forty-four percent of incoming students at the University of Chicago were white in 2021, an 8 percent drop from 2019. Only 19 percent of incoming freshmen at Johns Hopkins were white for the 2021-22 academic year. Brown, Penn Stanford, and Princeton also have minority-white freshmen classes. It was already difficult to get into an elite school as a white person, but college bureaucrats have decided to make it even harder [Colleges Are Ethnically Cleansing America’s White Kulaks, Revolver, June 25, 2022].

And none of this counts the anti-white Critical Race Theory seminars and programs that schools and major corporations are forcing on white employees.

Again, Affirmative Action greatly harms the one white demographic that is slipping away from the GOP: the college-educated. Polls continue to show this is the demographic that might make Republicans do poorly in the upcoming midterms. Incredibly, one survey in July found Republicans polling better among Hispanics than among college-educated whites.

Republicans cannot win elections without college-educated whites. They will never win an election again if they lose this demographic by 20 points. And a few more Hispanic Republicans will not compensate for the difference.

Thus, the GOP needs a pitch for those voters, and Affirmative Action should be it. No matter how Leftist a college-educated white is, he could still lose his job or see his daughter denied a spot at a good school just because of race. A traumatic event like that could dramatically reshape someone’s politics. And it’s a threat that white college graduates will have to worry more about in anti-white America.

As well, the U.S. Supreme Court will take up the issue in the coming term. If SCOTUS ends the practice for university admissions, it will shape American politics in the same way the high court’s decision on abortion did. Republicans must be ready with a response [Supreme Court sets Oct. 31 arguments for landmark college Affirmative Action cases, by Ariane de Vogue, CNN, August 3, 2022].

Yet Republicans rarely bring it up on the campaign trail—with the exception of changing admissions standards in high schools. Virginia Governor Glenn Youngkin won last year partly by highlighting the ridiculous racial quotas imposed in some of the state’s best high schools. Outside of that, Republicans just don’t discuss it. But in past, daring Republicans won statewide races by attacking racial preferences in hiring, as GOP Senator Jesse Helms did in the 1990 North Carolina Senate race. Even Jeb Bush campaigned against Affirmative Action in his gubernatorial bids [Thousands March Against Florida Gov. Jeb Bush’s Policy to End Affirmative Action, by Jeffrey J. Selingo, Chronicle of Higher Education, March 8, 2000].

It is odd that Republicans other than Masters won’t raise the issue, particularly in light of the crusade against Critical Race Theory. Affirmative Action is Critical Race Theory in practice. It undermines the American commitment to merit, places incompetent people in positions of responsibility and power, and discriminates against the very people who built this country—the Historic American Nation. It’s also very unpopular. Republicans are leaving a winning issue on the table.

Quite probably, fear of being called racist is the reason. Masters faces a bevy of racism accusations for questioning diversity and Affirmative Action. Most Republicans would crumple and do everything in their power to avoid such attacks. Fortunately, candidates like Blake Masters ignore the attacks and focus on a strong message.

That’s one reason, by the way, that GOP Senate leader Mitch McConnell’s yanking $8 million of advertising in Arizona is so incandescently stupid [Mitch McConnell-backed GOP super PAC cancels nearly $10M in ad buys in Arizona, Alaska ahead of midterms, by Landon Mion, Fox News, August 27, 2022]. Just one Republican candidate has the courage to raise an obviously winning issue, but the bright bulbs in McConnell’s PAC respond by delaying ads in a race in which the candidate is just a few points behind in the polls. GOP strategery at its best! 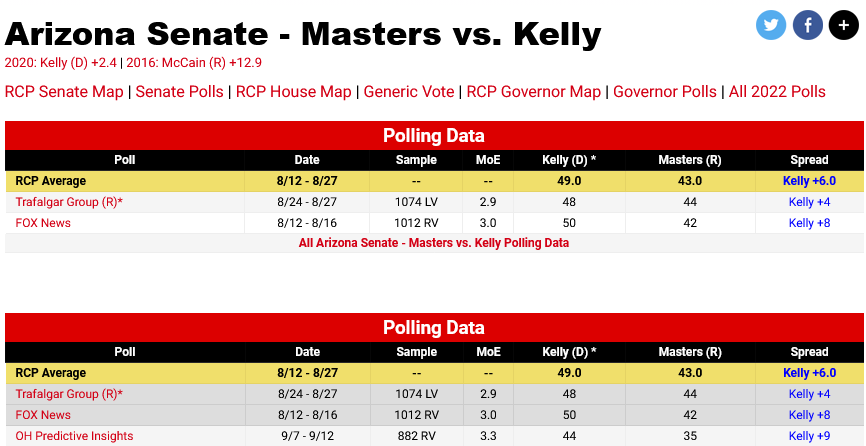 Hopefully, Masters’ campaign strategy will inspire imitators—just as the few stalwart souls who bravely discussed The Great Replacement made it a key GOP/GAP issue.

Republicans desperately need college-educated whites to win elections. Vowing to eliminate the illegal policies that discriminate against them in employment and education is a good start.