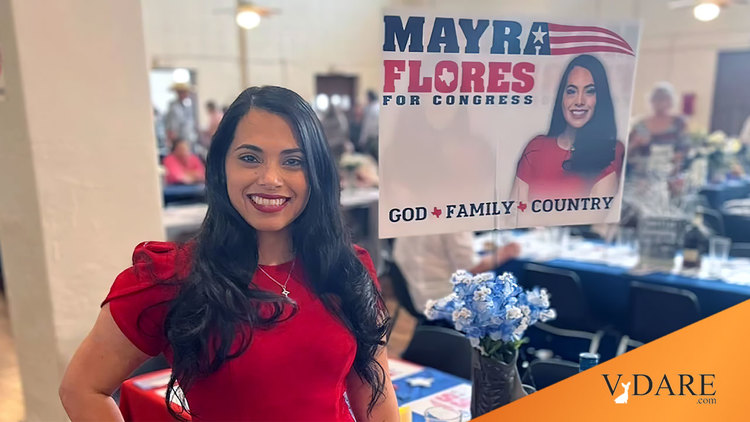 If only because of the illegal-alien invasion at the southwest border, Republicans have been rightly optimistic about crushing Biden’s party in November. And Mexico-born Mayra Flores’ victory in the special election for Texas 34th congressional district has reinforced those not-unwarranted hopes [Newly elected Mayra Flores on Democrats: ‘They feel entitled to our vote,’ by David Cohen, Politico, June 19, 2022]. But GOP strategists must not imagine that Flores’ success means Hispanics are running to the GOP nationwide, so they just need to continue tilting at the windmill of the Hispanic vote while ignoring the white middle class. South Texas is unique, and very unlike the major cities where Hispanics are monolithically Democrat and will certainly stay that way.

TX-34 is 85 percent Hispanic and it has been solidly Democrat for ages [Republicans flip U.S. House seat in South Texas, historically a Democratic stronghold, by Patrick Svitek, Texas Tribune, June 14, 2022]. Incumbent Rep. Filemon Vela Jr. announced in March 2021 that he would not run for re-election, despite winning 55-42 in 2020. Perhaps significantly, Joe Biden won the district by a smaller margin, 51-37. For perspective, Barack Obama and Hillary Clinton won the district handily during their presidential runs in 2012 and 2016: 61-38 and 59-37 respectively.

Flores’ background is unusual. She was born in Tamaulipas State in Mexico, and her husband is a Border Patrol agent—named John Vallejo, a typically assimilated Tejano name. This illustrates a point repeatedly made by VDARE.com’s Allan Wall: not all Mexican-Americans are keen about mass migration. Unlike mass migration boosters such as white Conquistador-American Jorge Ramos, who likely enjoys the services of a helot class of servants, many Hispanics must deal with illegal aliens in the workforce and recognize that they push down wages.

As for Rep. Vicente Gonzalez, he has represented the 15th district since 2017. Once a safe Democratic district, it’s become more competitive in the past decade. Hilary Clinton won the district by a comfortable 56-40, though in 2020 Biden defeated Donald Trump by a thin two points, 50-48. Gonzalez won by just three points, 50-47. My guess: Flores may prevail because 2022 looks like an awful year for Democrats, but it will be tough.

So yes, appearances are, South Texas Hispanics are tilting Republican. Most notable was Republican success in Zapata County. Democrats won easily there in 2016, 66 percent to 33. But Donald Trump won in 2020, 52-47—the first time in a century that the GOP took the county in a presidential election, and in a year when its presidential candidate lost [First Reading: Why it was Viva Trump! in Zapata County, by Jonathan Tilove, Austin-American Statesman, November 5, 2020].

Republicans are understandably encouraged. On the heels of Flores’ victory, sports/politics website Outkick founder Clay Travis declared that Hispanics are “overwhelmingly breaking in favor of the Republican Party because Democrats have become totally insane” [Hispanics Swing Republican In Texas Primary, Clay Travis Reacts, by Outkick Flash, Outkick, June 15, 2022]. He added that Hispanics are drifting towards the GOP “because they believe in America…because they have strong family values.” The editors of National Review argued that Flores' victory on June 14 “portends a major shift in the American political landscape” (although they note that Flores supports “a legal pathway to citizenship,” aka Amnesty [An Earthquake in South Texas, by The Editors, National Review, June 16, 2022].

But, encouraging as all this is, GOP–Con Inc. Brain Trusters had better understand what appears to be a pro-GOP move among Hispanics.

Yes, the Democratic Party’s embrace of Wokery is causing blowback among non-black minorities. As VDARE.com’s Washington Watcher II wrote here, Law-And-Order issues and Biden’s Border Treason are prompting many non-white groups to reconsider membership in the Rainbow Coalition. The border collapse is particularly concerning to South Texas Hispanics. They must deal with the results of mass migration every day [Democrat Mayor Begs Biden Not to Release Illegals into His City, by Joe Hyde, San Angelo Live, February 18, 2021].

However, as I’ve written before, the GOP shouldn’t break out the champagne just yet, and must not fall for the anecdotal fallacy: i.e., that a victory here or there means the party is poised to pick up the majority of the Hispanic vote. Yes, the GOP should focus on Texas’ border districts, not least because of the baleful effects of mass immigration on the Hispanics who live there. But going beyond that and expecting to promote a broader Hispanic exodus from the Democratic Party is a stretch. Moreover, it’s a major misallocation of resources at a time when the GOP still hasn’t fully consolidated the white working class vote.

The results from South Texas cannot be applied to other Hispanic groups nationwide. That’s because the long-established Tejanos of Texas are culturally distinct [Trump Didn’t Win the Latino Vote in Texas. He Won the Tejano Vote, by Jack Herrera, Politico, November 11, 2017]. Their ancestors include descendants of Spanish settlers present in the colonial period, as well as German and other European immigrants who learned Spanish, plus Mexicans who fled the extremely bloody and Leftist 1910-1920 Mexican Revolution. In many respects we could be witnessing an ethnogenesis, where Tejanos realize they share interests with Middle America and have no desire to join the Democrats’ anti-American coalition. They have more in common with America’s white working class, which is concentrated in the Rust Belt. Like working-class whites, they have an economic interest in keeping low-wage immigrants out of the country to protect jobs and strengthen labor’s negotiating power.

This isn’t really new. Tejano leaders such as Juan Seguin joined the predominantly Anglo revolutionaries to break free from Mexican dictator Santa Anna’s despotic rule during the Texas Revolution. These Spanish-speakers and their posterity have forged a separate identity since then.

Thus, if Republicans bothered to research this history, they would quickly learn that events in South Texas cannot be so easily applied to the rest of the Hispanic population in the U.S.

I predict that South Texas Hispanics will abandon the Democrat Party because of the unprecedented invasion at the southwest border and their unique identity. They’re a well-rooted partly Hispanic population that does not feel solidarity with the post–Hart Celler wave of Mexican migrants.

But that is why efforts to replicate South Texas’ success with large Hispanic populations elsewhere are destined to fail. Granted, Republicans gained among Hispanics in large metro centers in 2020 [Culture wars fuel Trump’s blue-collar Latino gains, by Marc Caputo, Politico, November 21, 2020]. But fully flipping Hispanics will be difficult because of their Leftist proclivities on economics—they unquestionably benefit from redistribution—and the cold, hard fact that large portions of them don’t identify with Historic American Nation.

As well, numbers matter in a mass democracy. South Texas is thinly populated. Knowing how angry border counties are about Biden’s planned invasion, Democrats might just surrender them to the GOP and intensify their outreach in urban and suburban areas. These are filled with large swathes of illegal aliens and their anchor-baby children, a seemingly limitless pool of prospective voters. Trading a few Tejano “deplorables” for a massive block of illegal aliens in urban centers nationwide is a safe gamble.

As for Hispanic outreach in general, I personally (as a Hispanic immigrant) could care less. Any nationalist movement worth its salt would devise electoral strategies and public policies that serve the Historic American Nation, not ethnic groups that played no meaningful role in founding and building this great nation.

If Republicans overperform with certain Hispanic subgroups, good for them. But the key issue of our time is consolidating the white working class vote to protect our national character.

Anything else is a distraction.

Pedro de Alvarado is a Hispanic dissident who is well aware of the realities of race from his experience living throughout Latin America and in the States.
As a native of lands conquered by brave Spaniards but later subverted by centuries of multiracial trickery and despotic governance, Pedro offers clear warnings to Americans about the perils of multiracialism.