Inaugurating her Politically Correct remake of National Geographic, Editrix-In-Chief Susan Goldberg wrote recently: “Some of what you find in our archives leaves you speechless, like a 1916 story about Australia. Underneath photos of two Aboriginal people, the caption reads: ‘South Australian Blackfellows: These savages rank lowest in intelligence of all human beings.’” [Link in original]. In fact, of course, this was a reasonably accurate description of Australia’s aborigines. But as the usual Leftist suspects are engaged in the usual sort of campaign to guilt-trip the 92% of Australia's population who are of European descent out of the county they created, it’s worth looking at what science has discovered about aborigines in the intervening century 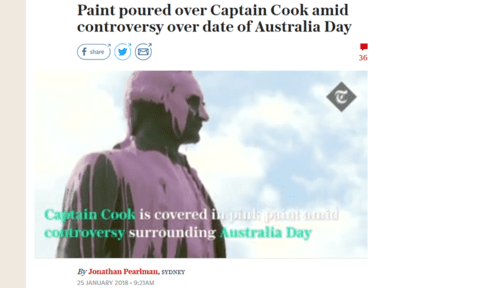 Just as in the U.S., the campaign to remake Australia is accompanied by attacks on the statues of the settler people’s icons. Thus vandals (probably not aborigines) sprayed across the statue of Australia’s discoverer Captain Cook, which occupies pride of place in the centre of Sydney, the slogans “No Pride in Genocide” and “Change the Date” (of Australia Day, January 25, because it celebrates the arrival of British—and therefore unacceptable—settlers in 1788) [Paint poured over Captain Cook amid controversy over date of Australia Day, by Jonathan Pearlman, Telegraph, UK, January 25, 2018]’”

But unlike in the U.S. (yet), the Left wants to institutionalize its favored constituency’s political power:

Australia, they insist, belongs only to its roughly 670,000 Aborigines, who make up 3% of its population.” Indeed, the Aborigines should be given a referendum on whether or not they should have a representative body, a ‘Voice of Parliament.’ In effect, this would be a third (albeit consultative) parliamentary chamber, voted for and stocked entirely by Aborigines. [PM says Closing the Gap results are 'promising', but Indigenous communities should be worked 'with, not to', by Lucy Sweeney, Australian Broadcasting Corporation,  February  11,  2018.”]

When Cook and his men landed in Australia in 1770 and met the Aborigines they couldn’t believe what they were confronted with. They recorded that they were “savages,” “barbaric” and even “stupid”.” And this wasn’t just casual racism. They knew the people of Hawaii well and, though they regarded them as childlike, perceived them in much more positive terms.

The ancestors of Europeans and Asians split from the so-called “Eurasians” about 30,000 years ago. But the ancestors of the Aborigines split off about 75,000 years ago and made their way through Asia, where they inter-breed with the now extinct Denisovan Neanderthal-like sub-species, which also interbred with ancestors of Papua New Guineans.” [An Aboriginal Australian Genome Reveals Separate Human Dispersals into Asia, by M. Rasmussen et al, Science. October 7, 2011]

Australia split from Papua New Guinea about 11,700 years ago. Aborigines were pretty much genetically isolated from then on, making them the most ancient population outside of Africa. Their closest genetic cousins are thus Papua New Guineans and Southeast Asians, though there is still a genetic chasm between them.

Despite the Aborigines sometimes being referred to as “blacks,” only Amerindians (“Native Americans”) are more genetically different from Africans than the Australian Aborigines.” [Which population is most genetically distant from Africans? Amerindians,  By Razib Khan, GNXP (Discover Magazine) August 19, 2010. Indeed, whites are actually closer genetically to Aborigines, although still very remote. And, paradoxically, African pygmies and Bushmen are genetically the most different from Aborigines, although occupying a similar hunter-gatherer niche, a phenomenon observed elsewhere in nature.” [On Genetic Interests: Family, Ethnicity and Humanity in an Age of Mass Migration by Frank Salter, 2006, p. 68]

Aborigines have do fascinating evolutionary quirks, such as the ability to survive extremes of temperature, sleeping naked out of doors below freezing.”  Genetic mutation helps Aboriginal people survive tough climate, research finds By Caitlyn Gribbin, ABC, January 29, 2014]. Although their environment is inhospitable, it is invariant—baking in the day and cold at night—and they’re strongly evolved to these extremes, so little planning is necessary.

But, consistent with the perception that the Aborigines weren’t very bright, we now know that at some point in their history they’d had sufficient ingenuity to be able to build relatively sturdy boats and make their way to the Torres Strait Islands, but by 1770, they had lost this knowledge. Indeed, the Australian archaeological record is replete with evidence of technological regression: some Aborigine tribes once farmed, some traded with Papua New Guineans, some tribes even “forgot” how to make the boomerang. [The curious case of the people who forgot how to fish,   by Adam Benton, Evoanth.Net, April 15, 2014] 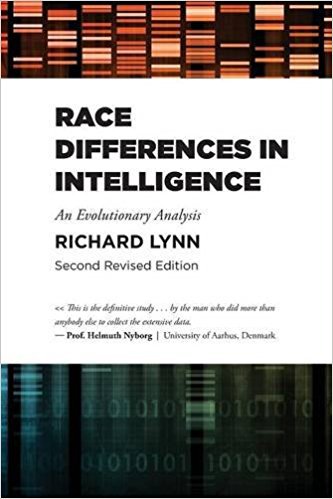 British psychologist Richard Lynn, in his seminal study of race differences in IQ, Race and Intelligence: An Evolutionary Analysis, brings together all of the available studies on the intelligence of modern Aborigines. They have an average IQ of 64, compared to about 70 for Sub-Saharan Africans, 85 for African Americans and 100 for whites.

An IQ of below 70, in Western countries, has you classified as mentally retarded. So, the average 18-year-old Aborigine has the mental age of 11.

And it’s not just low intelligence from which the Aborigines suffer. Like Native Americans, but unlike many African blacks, they never developed alcohol, leaving them strongly prone to alcoholism. And even compared to blacks, they are evolved to “live fast and die young”—a so-called fast Life History strategy which is an adaptation to an unstable ecology.

In such an unstable environment there was very little selection for cooperative groups and thus for Agreeableness, impulse control and mental stability. Thus while American Blacks are 12% of the US population and 38% of its prison population. “ Aborigines are 3% of the Australian population and, in 2009, 25% of its prison population.” ["In charts: How Australia's prisoner population is booming". by Sophie Russell and Eileen Baldry, ABC News.   June 13, 2017.]. In the UK, it has been found that 4% of whites and 10% of blacks have mental health problems—particularly schizophrenia in the case of blacks.” It has been estimated that this is true of over 50% of Aborigines.” [The pattern of psychiatric morbidity in a Victorian urban aboriginal general practice population, McKendrick J1, et al, Australian & New Zealand Journal of Psychiatry, March  1992]. The Native American suicide rate is 4 times the American national average.” The Aborigine suicide rate is 7 times the Australian national average.” The life expectancy of male Aborigines in 69, ten years lower than that of other Australians”. They have high rates of dementia—12.4% compared to 2.4% among whites.” [High prevalence of dementia and cognitive impairment in Indigenous Australians, Neurology. November 2008]

The Aborigines were so “different” from any race that the European colonizers had ever seen—including Africans—that they weren’t even sure they were human. Many concluded that they were not. As late as 1901, the Australian Parliament was debating the issue, though white Australians had long been interbreeding with Aborigines  by then.

By the mid-twentieth century, such attitudes had obviously changed. But it was clear that if you left Australian Aborigines to raise their own children, then these children would often be subject to abuse and would never break out of the poverty in which they had been raised.

Left in their own “Indigenous Protected Areas,” the living conditions of Australian Aborigines are extraordinarily poor, especially considering that, annually, $43,000 is spent on every Aborigine, compared to $21,000 on everybody else.” [ FactCheck Q&A: is $30 billion spent every year on 500,000 Indigenous people in Australia? The Conversation, September 5, 2016] In part, more money needs to be spent on Aborigines because they live in remote areas. But it is they who insist on living in these places which, therefore, lack proper sanitation and access to services, just as a European Australian would in such places. Extreme inertia, manifested in failure migrate out of chaos, is another correlate of very low IQ.

Accordingly, between 1910 and 1970, roughly a third of Aborigine children—those whose backgrounds were the most abusive—were removed from their parents and raised in foster homes, to give them some kind of chance.

This worked in the sense that, placed in cities, the Aborigine income and standard of living was higher than that of those who were not removed. They had about the same educational success as the “non-removed”—but the non-removed would have been from more stable backgrounds in the first place.

By the 1980s this paternalistic policy was being roundly condemned as removing these children, now known as “the Stolen Generation,” from “their cultural heritage”—ignoring the fact that this heritage seems to include physical abuse, alcoholism, and high infant mortality. By 1998 the virtue-signalling frenzy was such that Australia held a “National Sorry Day” for the victims. The authors of the 1997 Bringing Them Home report on this policy described what had happened as “genocide.”“

In 2008, the then-Labor Prime Minister, Kevin Rudd, issued a formal apology to the Aborigines, drafted in consultation with Aborigine community leaders. [Rudd's apology to the Stolen Generation . By Tony Wright,  The Age, February 14, 2008].

In his official response to Rudd’s speech, Liberal Party Opposition Leader Brendon Nelson had the audacity to note that in 2006, a 4-year-old Aborigine girl had drowned while being raped by a teenage Aborigine who had been sniffing petrol. Two babies had been sexually assaulted while their mothers were away drinking and “another baby was stabbed by a man trying to kill her mother.”“

But now the policy has stopped, and it is more difficult for Aborigines to escape poverty, so they complain about that. The succeeding initiative “Closing the Gap,” which involves various forms of government intervention, is condemned as a new colonialism.

Of course, it will be obvious to VDARE.com readers why none of the policies work: they assume that Aborigine disadvantage is environment. But it’s clearly significantly genetic—intelligence is about 80% genetic.

The Booker Prize-winning Australian novelist Peter Carey has stated that, as an Australian, ‘You wake up in the morning and you are the beneficiary of genocide.’” [Guardian November 17, 2017].  But in reality, it is the Aborigines who should wake up in the morning and realise that they are the beneficiaries of a society and economy that they could never have created on their own.