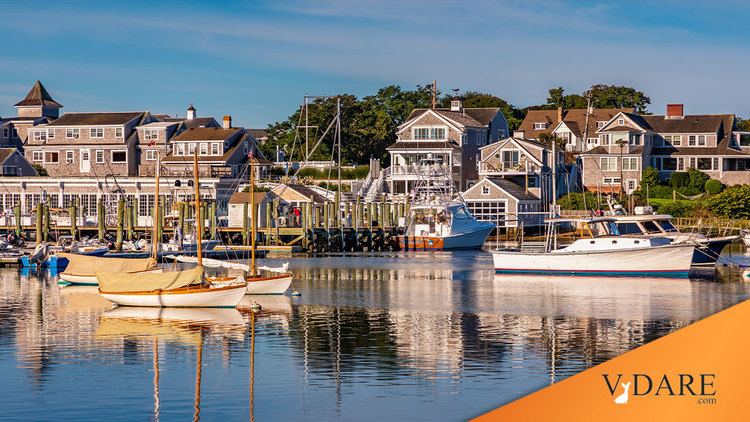 The immigration reform movement is succeeding because so many arguments made by our immigration enthusiast foes simply do not pass the smell test.

An excellent example is the brouhaha that Cape Cod employers created about what they allege is a shortage of employees willing to work seasonal summer jobs—the notorious "jobs Americans won't do."

When I first reported on this for VDARE.COM on March 19th 2004, [Abolishing New England: Cheap Labor vs. College Kids] little did I know that debate was just heating up.

Three months ago, Cape Cod businesses made their annual claim that no employees were available locally. Translation: no local employees are willing to work for peanuts and be forced to log overtime without appropriate compensation.

Cape Cod employers whined that, to keep their businesses open, an increase in the number of H-2B visas from the existing cap of 66,000 to 100,000 was essential.

But I discovered that no serious effort had been made to recruit local kids—at any salary.

Although New England is home to thousands of universities, I found no Cape Cod jobs posted on any of the dozens of college websites I scanned.

What's happened in the ninety days since my original column appeared is an astounding demonstration of how far Cape Cod employers will go—literally and figuratively—not to hire Americans.

Instead of bowing to the inevitable by tapping nearby college kids, the Cape Cod employers looked for relief from Capitol Hill and Massachusetts Senator Edward Kennedy.

Never one to disappoint the business community when it comes to cheap labor, Kennedy introduced the Safe, Orderly and Legal Visas Enforcement Act of 2004 in early May. SOLVE would not only increase the H-2B visa cap, it would create a new temporary visa, the H-1D. ()

But because more sensible legislators seem leery of unpopular bills that bring in overseas workers in a time of high unemployment, the Solve Act bogged down in Congress.

Feeling thwarted, a Massachusetts delegation of labor and tourist officials flew to the Virgin Islands—where residents are US citizens— to see if it could round up some unsuspecting workers to sign up for low-paying gigs on the Cape.[Jobs In New England Raise V.I. Hopes, Concerns, By Don Buchanan, St. Croix Source, USVI.]]

But Virgin Island officials were one step ahead of the delegation. They insisted that their workers earn a living wage, receive adequate housing and transportation, work in satisfactory conditions and be treated with dignity.

"Our citizens are first class, bona fide US citizens. We want to make sure they aren't treated like migrant workers," said Cecil Benjamin, Virgin Islands Commissioner of Labor.

Apparently, they know the score on the Virgin Islands.

But even Benjamin's modest request for decent treatment proved a problem for the delegation.

Said Pat Stone, owner of the Lighthouse Inn: "It would require us to pay quite a bit of money up front with no guarantee that the employee would stay with us."[New England Job Fair in the Territory Won't Happen by Don Buchanan, St. Croix Source, USVI]

While the Cape Cod delegation was trying to sell itself in the Virgin Islands, eight Cape Cod businesses brought a lawsuit in Boston U.S. District Court against the US Labor Department, the state Department of Workforce Development, and the US Citizenship and Immigration Services, claiming the government had unfairly prevented their organizations from obtaining the visas critical to their continued operation.

But on June 9th Judge George A. O'Toole Jr. declined to issue an order in support of the plaintiffs. [Cape firms denied on visas By Diane E. Lewis, Boston Globe, June 10, 2004]

In an effort to avoid hiring Americans, they will however:

By the time they have covered all their costs to avoid hiring Americans, the Cape Cod industries could pay $15 an hour for housekeepers!

I spoke with Professor Andrew Sum from Boston's Northeastern University about the Cape Cod phenomenon.  Sum is the author of a recent report titled "Youth Shut Out by Labor Market" and published by the Center for Labor Market Studies.

Isn't there some way, I asked Sum, unemployed youth in the Boston area could be hired by the "desperate" Cape Cod businesses?

Sum told me that, while there were unique problems to seasonal Cape Cod work, if there were a sincere interest in using local labor, it could be done.

"In the late 1980s and early 1990s, businesses bussed kids in from New Bedford and Fall River to work on the Cape," Sum told me.

When I inquired why the practice ended, Sum said that the employers were no longer willing to pay the bus fare.

As we know, by that time immigrant labor—both legal and illegal—had become a force in the employment market.

Why even pay bus fare when you can hire dirt-cheap?

Michael Guignard is a retired Foreign Service Officer who has studied the H-2B visa extensively. Guignard told me:

"The H-2B visa for this summer is essentially dead…To get an H-2B worker is a long and arduous process.  First the application is sent to the local or state Dept. of Labor, then it goes to the Regional U.S. Dept. of Labor ETA, then an I-129 petition must be filed with USCIS.  Then the petition approval must be mailed to the applicants who have to go and apply for a visa. And there is no guarantee that the visa will be issued if the U.S. Consul believes that the applicants will violate their immigration visas.  This entire process takes at least 4 months."

Just imagine how lucrative it must be for businesses to hire H-2B visa holders if they are willing to go through that bureaucratic nightmare to bring a foreign worker to the U.S.

Now push has come to shove. Businesses that darkly predicted they would have to fold their tents without more H-2B workers are three weeks into the summer—and still operating.

If those Cape Cod businesses remain viable for the next three months—as they most certainly will—all that crying about how vital H-2B visas are will be exposed as nothing but crocodile tears.

And the immigration reform movement will have a solid example that there is no need crank up the visa process every time an employer shouts, "Shortage!"

Joe Guzzardi [email him], an instructor in English at the Lodi Adult School, has been writing a weekly newspaper column since 1988. This column is exclusive to VDARE.COM.