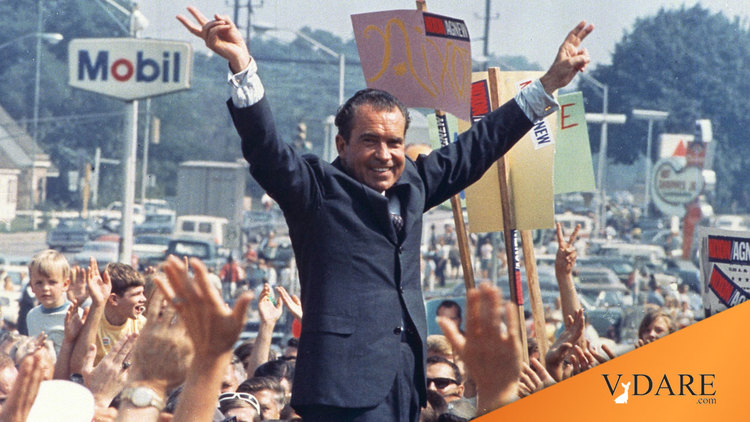 It has been a summer of remembrance.

The centennial of the Great War that began with the Guns of August 1914. The 75th anniversary of the Danzig crisis that led to Hitler's invasion of Poland on Sept. 1, 1939. The 70th anniversary of D-Day.

Once again, aging liberals will walk the children through the tale of that triumph of American democracy when they helped to save our republic from the greatest menace to the Constitution in all of history.

Missing from the retelling will be the astonishing achievements of that most maligned of statesmen in the 20th century. And as this writer was at Nixon's side for more than eight years before that August day in 1974, let me recount a few.

Liberalism's best and brightest had marched us into an Asian war they could not win or end. Yet by the end of Nixon's first term, all U.S. forces and POWs were home or on the way, and every provincial capital was in Saigon's hands.

Nixon had promised to end the war with honor. He had done so.

Moreover, he had negotiated with Moscow the greatest arms control treaty since the Washington Naval Agreement of 1921-22: SALT I, setting limits on long-range ballistic missiles, and the ABM Treaty.

Nixon had gone to China and brought that enormous nation, then in the madness of its Great Proletarian Cultural Revolution, out of its angry isolation.

He would rescue Israel in the Yom Kippur War at her moment of maximum peril, with a massive U.S. airlift and warning to the Soviet Union of Leonid Brezhnev not to intervene as Moscow appeared about to do.

At that war's end, Nixon would pull Egypt out of the Soviet Bloc into America's orbit, where Anwar Sadat would later negotiate a peace with Menachem Begin.

Though he took office with both houses of Congress against him and the media loathing him, Nixon ended the draft as he had promised, created the successful all-volunteer Army, and extended the vote to all 18-, 19- and 20-year-old Americans.

When he took office, only 10 percent of Southern schools were desegregated. When Nixon left, the figure was 70 percent.

During Nixon's first term, 12 Americans, beginning with Neil Armstrong, walked on the moon. No American has ever done so since.

Nixon increased Social Security benefits to seniors and indexed them against inflation, as he had promised in 1966. Scores of millions of retired and elderly Americans today enjoy a far greater economic security because of Richard Nixon.

Nixon created the Environmental Protection Agency, OSHA, and the Cancer Institute, of which he was especially proud.

During the first 25 years of the Cold War, America bore almost alone the burden of rebuilding Europe and Japan, the defense of the West, and the hot wars in Korea and Vietnam to halt the advance of communism.

As U.S. dollars poured out, allies began to cash them in for Fort Knox gold. Nixon ended Bretton Woods, shut the gold window, let the dollar float and imposed wage and price controls. For better or worse, Richard Nixon was the father of the modern economic era. No future president has undone what he did.

As coalition builder, Nixon is rivaled in the 20th century only by FDR. As this writer relates in "The Greatest Comeback: How Richard Nixon Rose from Defeat to Create the New Majority," Nixon rebuilt his ruined career and reunited his shattered party after the LBJ landslide of 1964, and he led it to victory in a cliffhanger three-way race in 1968, the most violent year since the Civil War.

By 1972, that united Republican Party had rallied to its banners a coalition of more than 60 percent of the nation, giving Richard Nixon an unprecedented 49-state landslide and enabling Republicans to maintain control of the White House in 20 of the 24 years after 1968.

1968 had been the year of the Tet Offensive, the breaking of the Johnson presidency, the murder of Dr. King, race riots in 100 cities, the assassination of Bobby Kennedy, and the shattering of the Democratic Party in the convention hall and the streets of Chicago.

By 1972, Hugh Sidey of Time was hailing the "cooling of America" in the Nixon presidency.

Remember his other accomplishments, when hearing this week again of the horrors on the tape of June 23.

Patrick J. Buchanan needs no introduction to VDARE.COM readers; his books State of Emergency: The Third World Invasion and Conquest of America,  and  Suicide of a Superpower: Will America Survive to 2025?  are available from Amazon.com.  Patrick J. Buchanan is the author of the new book “The Greatest Comeback: How Richard Nixon Rose From Defeat to Create the New Majority.“