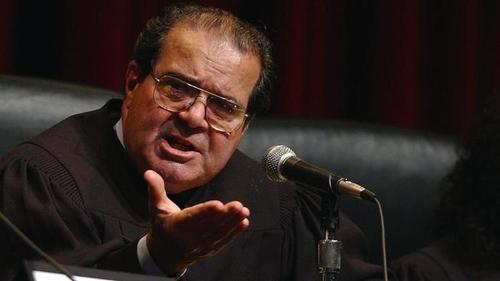 Of Course Scalia Had A Point—But Affirmative Action’s Real Damage Is To Whites, Asians, And America

Donald Trump has shifted the Overton Window, soaring to the top of the polls while championing issues the political class believed were off-limits. But even Trump seemed to side with the Left in deploring Justice Antonin Scalia’s recent remarks about Affirmative Action’s paradoxical negative impact on African-Americans. Of course, Scalia had an entirely reasonable point. However, it’s time to face up to the real scandal: the damage that Affirmative Action does to displaced whites (and Asians).

“I'm just not impressed by the fact that the University of Texas may have fewer [black students without Affirmative Action]. Maybe it ought to have fewer…And I don't think it stands to reason that it's a good thing for the University of Texas to admit as many blacks as possible." [Read the most controversial statement by Justice Scalia on admissions and race, by Robert Barnes, Washington, Post, December 10, 2015]

"There are those who contend that it does not benefit African—Americans to get them into the University of Texas where they do not do well, as opposed to having them go to a less advanced school, a less —a slower—track school where they do well,"

After the arguments, the gasps were less muted:

That a sitting Supreme Court justice could feel emboldened enough to articulate the kind of boldfaced belief in white supremacy thought to have ended with formal racial segregation illustrates the contours of the nation’s New Jim Crow, a system that justifies the dearth of African-American bodies in predominantly white spaces by questioning whether they truly belong there in the first place. [Scalia Comments Shine Light on U.S. Institutional Racism, Newsweek, December 10, 2015]

Of course, those less-muted gaspers already favored Affirmative Action anyway. And Scalia had his defenders. But by shrieking and creating a scandal, the Left once again succeeded in shifting the Overton Window in its direction. What was once the most Politically Correct reason to oppose Affirmative Action—that it was damaging to blacks—is now Officially Offensive.

Note that Scalia was not suggesting that blacks are inherently unfit to succeed at top schools, merely that blacks who have inferior grades and test scores to their white and Asian peers will not excel. This is known as the Mismatch Theory.

Admitting blacks, Hispanics, and Native Americans to hypercompetitive colleges that otherwise would have rejected them, Mismatch Theory holds, just means that these students are more likely to burn out and fail. Even those who do manage to graduate often end up taking less challenging majors and ultimately learn less. Mismatch Theory suggests that these students would have been better off attending a less competitive school where they would have excelled.

The Mismatch Theory is popular amongst Conservatism Inc. intellectuals because it argues that we should oppose Affirmative Action because it hurts blacks—not because it hurts whites and Asians. This is not a new argument, but it’s more plausible than the “soft bigotry of low expectations” trope about black self-esteem, and much more acceptable in the current climate. 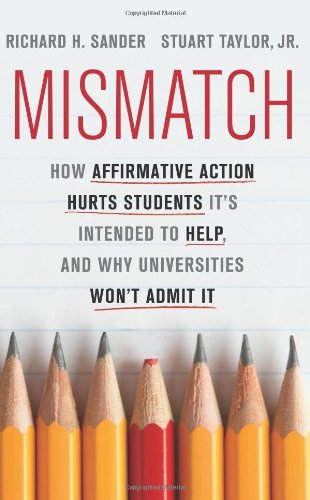 Even a brave conservative like Heather Mac Donald has claimed that Mismatch Theory “is the most powerful critique of Affirmative Action yet developed” . [A Devastating Affirmative-Action Failure, National Review, August 26, 2013] And the coauthor of one of the amicus briefs to which Scalia was referring was Stuart Taylor, co-author of the book Mismatch: How Affirmative Action Hurts Students It’s Intended to Help, and Why Universities Won’t Admit It.

But, though plausible, the theory may be overstated. To take an extreme example: one Kashawn Campbell, an African American student who lacked basic writing skills, was admitted into the University of California-Berkeley, where he struggled. He was profiled by the Los Angeles Times.

At Cal, he was among the hardest workers in the dorm, but he could barely keep afloat. Seeking help, he went at least once a week to the office of his writing instructor, Verda Delp. The more she saw him, the more she worried. His writing often didn’t make sense. He struggled to comprehend the readings for her class and think critically about the text. “It took a while for him to understand there was a problem,” Delp said. “He could not believe that he needed more skills. He would revise his papers and each time he would turn his work back in having complicated it. The paper would be full of words he thought were academic, writing the way he thought a college student should write, using big words he didn’t have command of.” [South L.A. student finds a different world at Cal, by Kurt Streeter, August 16, 2013]

Campbell was an extreme example of racial preferences. He attended Jefferson High School, which was 91% Hispanic, 8.4% African American, 0.0% Asian, and is 0.0% white. When Campbell graduated from the school in 2012, only 4.1% of the students were proficient in Math and only 18.9% were proficient in English (that was an improvement from a few years earlier when the numbers were 0.6 and 12.9). Campbell was likely admitted through California’s policy of admitting the top students at every high school. Even under normal racial quotas, Campbell probably would not have been admitted. But because California ostensibly did away with racial preferences after Proposition 209 and now just takes the top of the class at non-white schools, this created distortions from which he benefitted.

Reflecting upon the story, UCLA Law professor Eugene Volokh suggested “it seems likely that Campbell would have been more successful at a school such as Cal State, which is more likely to spend more time remedying the gaps in Campbell’s education” [The Mismatch Effect, in the L.A. Times, Volokh Conspiracy, August 23, 2013].

But is this true? During his first year, Campbell managed to squeak through by taking African American Studies classes. A year later he seemed happy at Berkeley, writing “I have learned more about what it means to be black in a new environment. It’s a beautiful struggle that warms me up like morning tea, knowing that I am making a statement with all of these activities and my ethnicity” [Beyond the banner: what inspired our poster students, The Daily Californian, November 3, 2014].

Between the tutors, teachers allowing Campbell (right) to retake classes, and African American studies courses, he will probably manage to graduate. He may lack basic writing skills, but Campbell no doubt has a profitable career ahead of him being black for a living.

Responding to the hoopla over Scalia’s comments, Stuart Taylor wrote,

[M]any recipients of large racial preferences would be better off in the long run—with more learning, better careers, and perhaps happier lives—if they went to less prestigious but still excellent schools where they could do well academically. Prestige has obvious advantages. The question is whether they outweigh the costs of being near the bottom of the class. [Scalia's Poorly Worded Comment Has Merit, Real Clear Politics, December 15, 2015]

I’m skeptical. I attended a semi-prestigious undergraduate school and an elite law school. When I applied for jobs after undergrad, not one employer asked for my transcript. They were confident that I was smart enough just based on the school’s pedigree. To most employers, being a poor student in undergrad at a top-notch institution is better than floating by at a mediocre one.

I did have to give my grades when I applied to Law School, but of course, these law schools also have racial preferences. It’s hard to argue that most Affirmative Action admissions harmed their recipients at elite law schools. Virtually no one fails out and at the top 3 law schools in the country—Harvard, Yale, and Stanford—do not have grades, nor does UC Berkley (ranked 8h). While all these schools have some distinctions among students, it is impossible to determine who is at the bottom of the class. Most other of the elite top 14 (T-14) law schools do not let students know their rank and some do not allow them to put their GPA on their resumes when applying for jobs. Similarly, elite MBA programs do not allow students to disclose their grades until after they are hired.

Based on their test scores, it seems like many, if not most, blacks who attend the top three Law Schools would have not been accepted to any of the “T-14” schools, but may have been accepted on the merits at schools at the bottom of the top 20. Most of the students accepted at the other schools would have ended up in schools ranked 20th-50th without Affirmative Action.

At most T-14 schools, if you have decent social skills and have OK grades you can get a job at a corporate law firm, while at the 20-50 ranked schools, you need to have top grades and law review. As blacks rarely make law review or honors at any school (at my law school, not one black received honors for being in the top quarter of the class), the firms choose based on where they attended.

And of course, Affirmative Action continues through graduation with law firms giving jobs to minority students with poorer grades than the white students at the same schools.

In short, the benefit of going to an elite school is not that you get a superior education, but rather that you can say you got into an elite school. Indeed, a Newsweek story that was somehow supposed to rebut Scalia noted that black students who attended selective colleges go on to earn big salaries, even if they had low SAT scores [Black Students Do Just Fine At Elite Schools. Justice Scalia Take Note. By Jonathan Rothwell, Newsweek, December 22, 2015]

I suspect Affirmative Action does actually harm some blacks who shouldn’t be in college to begin with. They may end up not graduating and carrying around debt without a degree to show for it.

But the Educrat dogma that everyone who wants to should go to college, and is also capable of graduating, is far more responsible for the plight of these blacks than Affirmative Action policies per se. This dogma has plunged plenty of whites who do not get Affirmative Action scholarships into debt as well.

Ultimately, there is no getting around the brutal reality: the real victims of Affirmative Action are the White and Asian students who are denied a spot in a selective school that they would have earned on their merits. 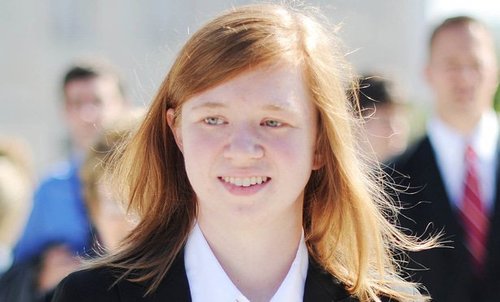 Instead of letting the Left push the Overton Window in their direction on racial preferences, we should take a page out of the Trump playbook (even if he’s AWOL on this issue). We should stand up explicitly for the White a.k.a. American and Asian students hurt by Affirmative Action. (Pictured right: plaintiff Abigail Fisher.)

And it’s time to discuss why that test score disparity among races exists in the first place. Even if that leads to some “muted|—and not muted—“gasps.”

John Reid [email him] is an American citizen and a recent law school graduate.