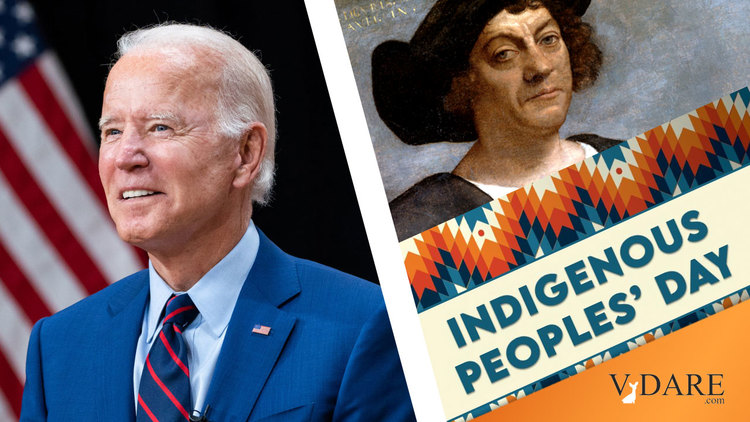 On Columbus Day, Biden Wants To Replace The Historic American Nation. But It Made The World

As of now, Columbus Day is still an American Federal Holiday as a matter of law.

But the Left is working on that. President Biden is trying to Replace it with the first Hate-America holiday. Invented by resentful Indians with the help of Leftist activists, Indigenous Peoples’ Day celebrates the wonderfulness of indigenous people generally, and how sorry the Federal government is or should be for interfering with them in the past.

The Federal Government has a solemn obligation to lift up and invest in the future of Indigenous people and empower Tribal Nations to govern their own communities and make their own decisions. We must never forget the centuries-long campaign of violence, displacement, assimilation, and terror wrought upon Native communities and Tribal Nations throughout our country. Today, we acknowledge the significant sacrifices made by Native peoples to this country—and recognize their many ongoing contributions to our Nation.

Note that this right of Tribal Nations “to govern their own communities and make their own decisions” is something American white people haven’t had for years.

Biden also took the occasion of proclaiming the legal holiday of Columbus Day to attack Christopher Columbus. After some weasel words about Italian-Americans, still frequently part of what’s left of the Democratic Party’s white base (especially in Biden’s home state of Delaware), he goes on about how evil Columbus was, and how evil America is for existing:

Today, we also acknowledge the painful history of wrongs and atrocities that many European explorers inflicted on Tribal Nations and Indigenous communities. It is a measure of our greatness as a Nation that we do not seek to bury these shameful episodes of our past—that we face them honestly, we bring them to the light, and we do all we can to address them. For Native Americans, western exploration ushered in a wave of devastation: violence perpetrated against Native communities, displacement and theft of Tribal homelands, the introduction and spread of disease, and more. On this day, we recognize this painful past and recommit ourselves to investing in Native communities, upholding our solemn and sacred commitments to Tribal sovereignty, and pursuing a brighter future centered on dignity, respect, justice, and opportunity for all people.

More than 500 years ago, Christopher Columbus's intrepid voyage to the New World ushered in a new era of exploration and discovery. His travels led to European contact with the Americas and, a century later, the first settlements on the shores of the modern day United States. Today, we celebrate Columbus Day to commemorate the great Italian who opened a new chapter in world history and to appreciate his enduring significance to the Western Hemisphere. …

Sadly, in recent years, radical activists have sought to undermine Christopher Columbus's legacy. These extremists seek to replace discussion of his vast contributions with talk of failings, his discoveries with atrocities, and his achievements with transgressions. Rather than learn from our history, this radical ideology and its adherents seek to revise it, deprive it of any splendor, and mark it as inherently sinister. They seek to squash any dissent from their orthodoxy. We must not give in to these tactics or consent to such a bleak view of our history. We must teach future generations about our storied heritage, starting with the protection of monuments to our intrepid heroes like Columbus. This June, I signed an Executive Order to ensure that any person or group destroying or vandalizing a Federal monument, memorial, or statue is prosecuted to the fullest extent of the law. …

On this Columbus Day, we embrace the same optimism that led Christopher Columbus to discover the New World. We inherit that optimism, along with the legacy of American heroes who blazed the trails, settled a continent, tamed the wilderness, and built the single-greatest nation the world has ever seen.

Of course Biden, above, is wrong about not seeking “to bury these shameful episodes of our past”—the Left enthusiastically trumpets anything done by whites that can be interpreted as shameful, while burying any shameful episodes committed by people of color.

Examples of the latter: Indian massacres (violence perpetrated by “Native communities”), black uprisings and mass murders committed during slavery, black race riots of the Sixties, the whole history of Reconstruction, and the huge crime spree committed by blacks from the Civil Rights Era until today.

As for the atrocities Biden is blaming whites for, they’re mostly bogus: the “introduction and spread of disease” was mutual (syphilis spread to Europe as part of the "Columbian Exchange," and so did the potato blight that caused the Famine in Ireland).

And as for the “theft of Tribal homelands,” I’ve explained before that they weren’t stolen. To quote Felix S. Cohen, a leading 20th century scholar of Indian law:

Fortunately for the security of American real estate titles, the business of securing cessions of Indian titles has been, on the whole, conscientiously pursued by the Federal Government, as long as there has been a Federal Government. The notion that America was stolen from the Indians is one of the myths by which we Americans are prone to hide our real virtues and make our idealism look as hard-boiled as possible. We are probably the one great nation in the world that has consistently sought to deal with an aboriginal population on fair and equitable terms. We have not always succeeded in this effort but our deviations have not been typical.

Thomas Jefferson said much the same thing in 1785 about land titles in Virginia:

That the lands of this country were taken from them by conquest, is not so general a truth as is supposed. I find in our historians and records, repeated proofs of purchase, which cover a considerable part of the lower country; and many more would doubtless be found on further search. The upper country we know has been acquired altogether by purchases made in the most unexceptionable form [Notes on the State of Virginia ch. 11].

At VDARE.com, we’ve been talking about “Abolishing America” in our headlines for years.

This Biden balderdash is more of the same—saying it was wrong for the Genoese navigator to cross the seas 1492, Virginia Dare’s parents to cross the seas in 1587, the Pilgrim Fathers to do the same thing in 1620, and the California pioneers to cross the plains in 1849 and afterward.

Biden’s anti-Americanism is part of a Blood Libel against white America and the Historic American Nation, which only exists today because white people steadfastly refused to be scalped, burned alive, or massacred.

They survived and made America—and the modern world.