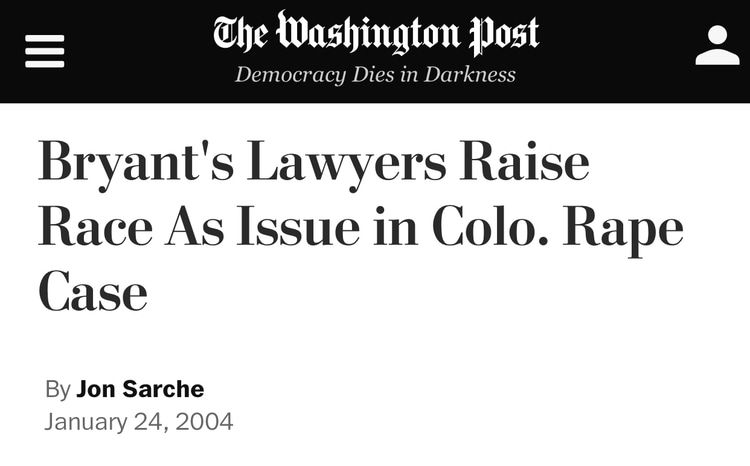 Sooner or later it was certain that the lawyers for black basketball player Kobe Bryant would start yelling "racism" in defense against charges that he raped a white woman.

Just as O.J. Simpson's defense was able to get him acquitted of the double murder of two whites in 1995 with the same tactic, so lawyers for Mr. Bryant are now deploying it to save their client from a serious prison sentence.

But the Simpson and Bryant cases are not unique.

Last week Mr. Bryant appeared in court in Colorado, where he faces trial on rape charges, with his white female lawyer Pamela Mackey, who pronounced to the judge, "My client stands accused of a very serious crime. There is lots of history about black men being falsely accused of this crime by white women." [AP, Bryant attorneys raise race issue during hearing]

Everyone's read To Kill a Mockingbird, in which a saintly black man is nearly lynched and then nearly convicted of raping a white woman, when it turns out the trashy white woman tried to seduce the black.  Miss Mackey is hoping the judge and jury have read the book too, or at least seen the movie, and will allow reality to imitate art.

But the Bryant rape case is not the only one where the real villains are whites (either vicious and bigoted white men or sluttish white women) and all blacks accused of raping white women are simply innocent martyrs to racial equality.

The New York Times recently reported on an obscure case in Georgia involving a black high school senior sentenced to a 10-year prison term for raping a 16-year old white girl. That rape, too, you see, didn't really happen.

The black convicted and sentenced is a young man named Marcus Dixon, who acknowledges that he had sex with the young woman but claims it was consensual. She had vaginal bruises that suggest otherwise, and Mr. Dixon, it turned out, had a history of sexual harassment of girls in the school (where, the Times was quick to point out, he enjoyed a 3.96 grade point average and had a football scholarship to Vanderbilt. What a guy!)

I have no idea whether either Mr. Dixon or Mr. Bryant is really guilty of rape, and from the facts so far available, both of them seem to have a plausible argument that they're not. But in the Georgia case, the local Afro-racists quickly seized the chance to score racial-political points.

On the eve of a court hearing to appeal the Dixon case, the Times reports, "nearly 100 people gathered outside the state Supreme Court here, holding candles and singing, 'We Shall Overcome," and they listened to the Rev. Joseph Lowery of the Southern Christian Leadership Council, who has decided that Mr. Dixon is innocent. "If the young lady was black and Marcus Dixon was white, I don't think we'd be here," Mr. Lowery declared to the crowd, in an astonishingly frank admission of racial motivation.

In fact, the Dixon story is not especially significant, even if the convicted man is innocent, and in itself, as a simple case of justice miscarried, it's hardly worth the attention of the New York Times (which seldom reports at all on brutal hate crimes against whites  committed by blacks).

The real purpose of the Times story is clear from the headline it used to telegraph the point: "Student Sex Case in Georgia Stirs Claims of Old South Justice."

The point is not that either he or Mr. Bryant is really guilty but that the unspoken assumptions of black innocence and white guilt have now so permeated the minds—of whites as well as blacks, of the media as well as the courts—that yelling "racism" can be considered a reliable if not infallible tactic to get an accused black acquitted.

"Race plays a part in everything," said Johnnie Cochran, O.J. Simpson's black lawyer when his client beat the rap for virtually beheading his white wife and killing her white friend to boot. In that case, black jurors simply rejected any evidence pointing to Simpson's guilt, whatever its merits. That they did so for reasons of racial solidarity was transparent.

Do blacks ever really commit any violence or harbor any hatred of whites?

Are all white women who claim they were raped by blacks simply liars who really sought sex from them?

Can blacks today be convicted in American courts of serious or notorious crimes against whites?

That may in fact be the case or may be soon, as the myth of black victimhood and universal white evil, with the assistance of media like the New York Times and big time lawyers like Mr. Cochran and Miss Mackey, continues to entrench itself deep within the minds of both races.