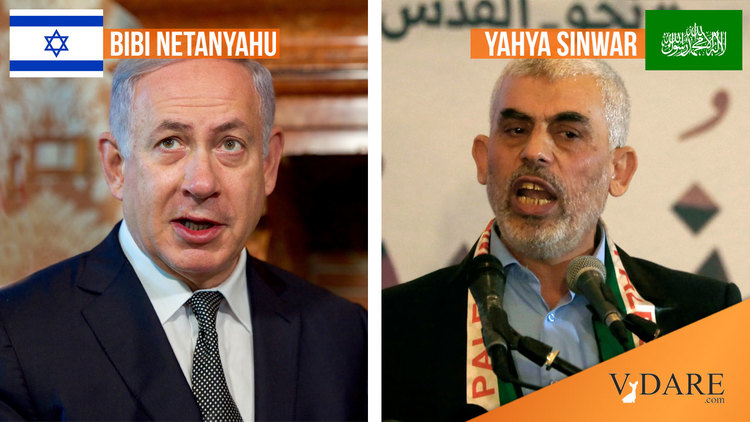 So ran the headline in the Jerusalem Post atop an analysis of the Gaza war, which began, "The IDF is registering great achievements in Operation Guardian of the Walls, but meanwhile the house appears to be collapsing from within."

Consider this New York Times commentary about Israel's prime minister from the runner-up to the Democratic presidential nominee in the primaries of 2016 and 2020, Sen. Bernie Sanders:

"Mr. Netanyahu has cultivated an increasingly intolerant and authoritarian type of racist nationalism ...(and) legitimized these forces ... by bringing them into the government. ... Racist mobs that attack Palestinians on the streets of Jerusalem now have representation in its Knesset."

Sanders' wing of the party is moving toward the Palestinian side of the conflict. "Israeli air strikes killing civilians in Gaza is an act of terrorism," says Rep. Ilhan Omar of Minnesota.

Wisconsin Rep. Mark Pocan concurs: "We cannot just condemn rockets fired by Hamas and ignore Israel's state-sanctioned police violence against Palestinians—including unlawful evictions, violent attacks on protestors & the murder of Palestinian children ... US aid should not be funding this violence."

While Israeli attacks are killing Hamas commanders and destroying the sites from which Hamas has fired 3,000 rockets, Israel is suffering serious and intangible losses.

Palestinians in Jerusalem and on the West Bank have risen in solidarity with Arabs and Muslims in Gaza. A dozen were slain last week.

Arab citizens of Israel are daily fighting Jews in cities like Jaffa, Acre and Lod. Writes the Post: "With riots shaking all parts of Israel," the country "is being torn apart from within."

Beyond Gaza, Jerusalem, the West Bank and Israel, Lebanese and Jordanians are protesting on the border. In U.S. and European cities like Berlin, London, Paris and Madrid, protesters numbering in the thousands and tens of thousands are marching in solidarity with the Palestinians and condemnation of Israel as a racist and an "apartheid" regime.

Saturday's morning attack that brought down Gaza's 12-story tower that housed the Associated Press and Al Jazeera caused a backlash in much of Western media against Israel, which claims the building contained a Hamas intelligence center and was a legitimate target.

House Speaker Nancy Pelosi and President Joe Biden have come out in defense of Israel's right to attack sites from which rockets are being fired into Israel. Senate Majority Leader Chuck Schumer, however, has been more muted in backing Israel's attacks on Gaza.

In a letter to Biden, 44 Republican senators wrote:

"Over the past couple days, Palestinian terrorists in Gaza, who are funded by Iran, have launched a series of rocket attacks into Israel. They are targeting Israeli civilians and cities, including Israel's capital Jerusalem."

Where Israel goes from here, however, is currently unclear.

President Donald Trump's Abraham Accords, in which the UAE, Bahrain, Morocco and Sudan established relations with Israel, appear now to be on hold.

For, on Sunday, a statement by the 57-nation Organization of Islamic Cooperation called for an immediate halt to what it described as Israel's barbaric attacks on Gaza and blamed "systematic crimes" against the Palestinians for the fighting which has lasted for a week.

The OIC statement came after a virtual meeting in which Saudi Arabia condemned Israel's violation of the sanctity of Muslim holy sites and evictions of Palestinians from their homes in East Jerusalem.

Clearly, the principal winner from this conflict is Bibi Netanyahu, who was within days of being replaced as prime minister by an opposition coalition when fighting erupted. He is now seen by Israelis as a decisive war leader, defending the country from thousands of rockets and severely punishing the enemies firing those rockets.

As for the two-state solution to which the world has been committed for decades, that prospect seems further from reality than ever.

Having seen what Hamas is capable of and willing to do, what Israeli will be eager to enter a peace agreement with the Palestinians that would mean vacating much of the West Bank, sharing Jerusalem as the capital of both countries, and a Palestinian right of return to lands from which their families were driven in the 1948–1949 Israeli War of Independence, which Palestinians remember as the Nakba, or catastrophe.

A military truce may be at hand, but that is all it will be—a truce before the next round of fighting.