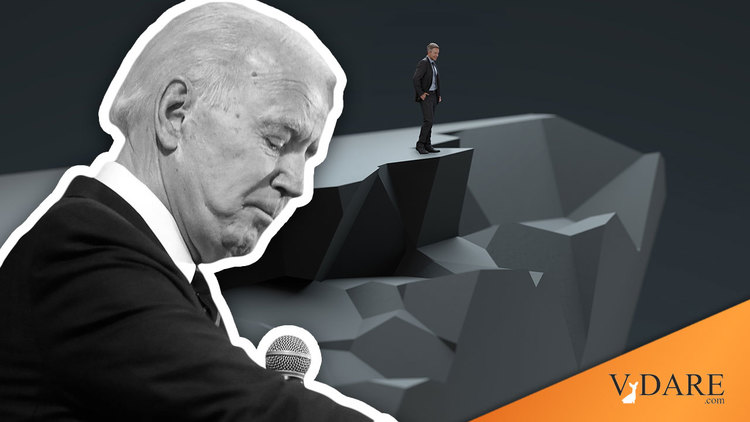 Patrick J. Buchanan: Biden's Staring Into The Abyss—And So Are We

"'Hope' is the thing with feathers / That perches in the soul," wrote Emily Dickinson. "And sore must be the storm / That could abash the little Bird / That kept so many warm."

Staring ahead on New Year's Eve, at what appear to be the coming storms of 2022, this once-hopeful country is going to have to fall back on its reserves.

Suddenly, the omicron variant of the coronavirus is sweeping the nation, shutting schools, shops, restaurants and bars that were only lately reopened. In this last week of 2021, new infections twice set records.

Is a fifth wave of the pandemic arriving, just two years after the first wave hit in March 2020?

What is hopeful here?

While the numbers of infected are exploding and deaths are rising anew, the omicron variant appears to be less severe and less lethal than the delta variant—and possibly less enduring.

From the medical community one hears the hope that the omicron variant could displace the delta and, as has happened in South Africa, burn itself out.

Still, if the present rate of infections and deaths continues, we could have a virus-related million American deaths by spring.

A second storm is economic, with inflation now running at 6.8%, the highest rate since the last days of Jimmy Carter and first days of Ronald Reagan.

Should this trend continue, inflation could be crushing to President Joe Biden's party and presidency next November. And, according to Thursday's Washington Post, that may be what is coming:

"Strong consumer demand, continuing supply chain troubles and the emergence of the omicron variant of the coronavirus threaten to prolong sharply rising prices well into 2022, potentially making inflation the premier economic challenge of the new year."

Nor does the world look any more tranquil from this vantage point.

In the second week of January, U.S. talks with Russia begin, probably in Geneva, on Russian President Vladimir Putin's demand for assurances that Ukraine not be admitted into NATO and no U.S. offensive weapons be stationed in a border nation from which they can be used to attack Russia with only minutes notice.

The hopeful news: Putin reportedly ordered 10,000 of the 100,000 Russian troops on Ukraine's border back to their bases deeper in Russia.

Still, it is hard to believe Putin is bluffing when he says that if Ukraine is invited to become a full member of NATO, Russia will see to it that the consummation never comes to pass.

As for China, there is no sign it is backing off from any of its territorial demands—on its Himalayan border with India, with half a dozen rival nations in the South and East China seas, or with Taiwan.

Probably the best we can hope for in the simmering Taiwan crisis is that China will put off its insistence on annexation of the island of 24 million while it digests the lately free city of Hong Kong.

Negotiation with Iran on a mutual return to the 2015 nuclear deal appears to be nearing the fish-or-cut-bait moment. Should the talks collapse without Iran's return to the restrictions of the deal, we will, early in the new year, hear more animated talk of "other options" and "Plan B"—synonyms for U.S. attacks on Tehran's nuclear facilities.

Hovering over all of the above is the gnawing and growing concern among the American people about the physical and mental capacities of their president.

A month ago, a Politico poll found that while 46% of Americans believe Biden is mentally fit for his office, 48% disagree. In the same poll, only about one-half of all Americans felt Biden was "in good health."

All that talk of a few months back of Biden being a statesman of superior competence, perhaps a second Franklin D. Roosevelt or Lyndon B. Johnson, has died out.

Yet the maladies and crises the country confronts from inflation, China, Russia, Iran, the explosion of shootings and murders in major cities, and our bleeding border are not Biden's alone; they are America's. They are ours. If Joe Biden fails, the country does not succeed.

Yet, since mid-August, an average of national polls has shown Biden to be slipping underwater and sinking deeper. His disapproval rating is now 10 points higher than his approval rating, which sits in the low 40s.

What does the future hold?

The latest news brought to 23 the number of House Democrats who are retiring or looking for another position rather than running for reelection in 2022. Yet, to regain the House majority, the GOP needs a net gain of just five seats in the 435-member chamber.

Most pundits believe the Democrats will lose the House and, if they do, the U.S. government will grind to gridlock for the next two years. Not exactly a formula for the restoration of a lost national unity or purpose.