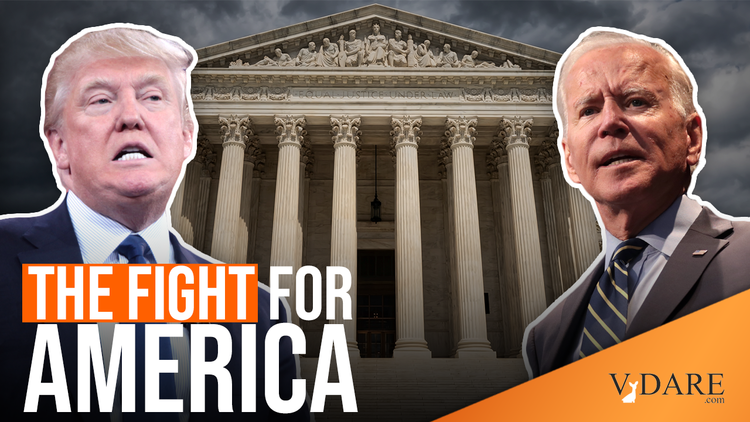 Patrick J. Buchanan: Supreme Court Nomination Means All the Chips Are on the Table Now

"As everyone knows, I made it clear that my first choice for the Supreme Court will make history as the first African American woman justice."

So Joe Biden promised. Since the death of Justice Ruth Bader Ginsburg, however, Biden has refused to produce a list of Black female judges and scholars whom he would consider for the now-vacant seat.

What is his problem?

Donald Trump had no such reluctance. In 2016, he listed a slew of candidates from among whom he promised to pick his justices. True to his word, Trump elevated federal appellate court judges Neil Gorsuch and Brett Kavanaugh.

Since the Kavanaugh confirmation, Judge Amy Coney Barrett has been openly discussed as a potential Trump choice to succeed liberal icon Ginsburg. Why is Biden so reluctant to reveal some highly qualified Black female judges? His refusal suggests that the kind of high court judges that America wants is not the liberals' issue. It is Trump's issue.

The president will announce his choice Saturday, after the mourning period for Ginsburg is over. Mitch McConnell's Senate is expected to confirm the new justice in late October.

With the court's ideological balance at stake, the battle from now to Nov. 3 is thus for all the marbles: control of the House, the Senate, the presidency and the U.S. Supreme Court.

Rarely has there been an election in which the stakes were so high, the ideological gulf so great and the outcome in such doubt.

The polls show Biden ahead, but Democrats are visibly nervous. Of greatest concern—the possibility that, Tuesday night, Biden, in the first debate, with his verbal and mental lapses occurring frequently now, could kick it all away in front of millions of voters.

On the court issue, Democrats are exhibiting something akin to panic. They are warning that if a conservative jurist like Barrett is confirmed, Democrats may retaliate by "packing" the Supreme Court—increasing the number of justices from nine to 11 and installing two new liberals—if they win the presidency and Senate.

If a Scalia constitutionalist is nominated and confirmed this year, says Sen. Chuck Schumer, "nothing is off the table next year."

Other Democrats are threatening to pack the Senate by granting statehood to D.C. and Puerto Rico. This would add four new Democratic Senators and formally convert the United States into a bilingual nation.

Nancy Pelosi has threatened a new impeachment of the president if he appoints a new justice to fill Ginsburg's seat. Yet, this is what Article II of the Constitution directs Trump to do.

Activists are talking about "burning down" the system, and given what we have witnessed in Portland, Seattle, Minneapolis and Louisville, the BLM crowd and its media camp followers should be taken seriously.

Should Democrats win the Senate and White House, they will face one obstacle to imposing the Biden-Bernie-Socialist-AOC agenda on the nation. Only the filibuster, the ability of a Senate minority, through extended debate, to delay, and occasionally frustrate, the will of the majority, would stand in the way of their turning their radical agenda into law, as LBJ did with his massive majorities in 1965.

This is no idle threat. Even Barack Obama is calling for abolition of the filibuster, stripping a Republican Senate minority of its last weapon of resistance in the world's greatest deliberative body.

Another danger facing the GOP is its demographic demise if it fails to control immigration.

Currently, white folks, who produce the vast majority of GOP votes, are 60% of the nation. The Black population is 12-13%, Hispanics 18%, Asian Americans 7%.

The GOP demographic crisis: The white population is steadily diminishing as a share of the electorate. Hispanics and Asians, who vote 2-1 Democratic in presidential elections, are the fastest-growing minorities and are being fed by the largest streams of migration.

A few years hence, the GOP will face the fate it failed to avert in California. Once the Golden State was Nixon and Reagan country, as those two Republicans carried California on all seven presidential tickets on which they ran from 1952 to 1984.

Moreover, former red states such as Florida, Georgia, North Carolina and Arizona are now swing states, and Texas is trending that way.

Democrats, too, have a white folks problem.

Presidential nominee Joe Biden is a 77-year-old white man who would be older than our oldest president, Ronald Reagan, was the day he left office.

The last white man appointed to the Supreme Court by a Democratic president was Stephen Breyer back in 1994. At 82, he is now the oldest justice serving.

The days of white liberals dominating the rising party of America's people of color may be over this decade.