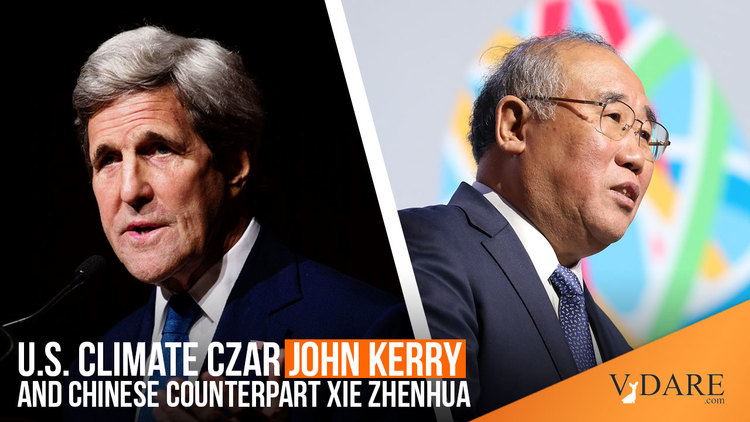 Patrick J. Buchanan: US And China—Collision Or Cooperation?

In a surprise announcement at the Glasgow summit, U.S. climate czar John Kerry and his Chinese counterpart declared that their two countries have pledged to work together to slow global warming.

Yet, the arrival a day earlier in Taiwan of a U.S. Navy plane from Clark Air Base in the Philippines, carrying a U.S. congressional delegation, set off a different reaction from Beijing:

"The Chinese People's Liberation Army will ... take all necessary measures to resolutely smash any interference by external forces and 'Taiwan independence' separatist plots."

The incidents touch on one of the great questions of our time.

Are China and the U.S., the world's preeminent powers, headed for a clash or a level of engagement that will enable us both to avoid either a hot war or a second Cold War?

In the 10 months since Joe Biden became president, the pessimists seem to have been largely proven right.

Just six weeks into the Biden presidency, the U.S., in its annual human rights report, declared: "Genocide and crimes against humanity occurred during the year against the predominantly Muslim Uyghurs and other ethnic and religious minority groups in Xinjiang."

This U.S. equating of China's behavior with the war crimes for which Nazis were hanged at Nuremberg set the table for what has followed.

China's behavior toward the new Biden administration has been almost uniformly hostile and contemptuous of U.S. protests.

Through the first 10 months of the Biden presidency, China has continued its persecution of the Uyghurs and systematically crushed the remnants of the democracy protests in Hong Kong.

This past summer, China tested a hypersonic cruise missile that can reach anywhere in the United States and which U.S. forces do not possess.

Chairman of the Joint Chiefs of Staff Gen. Mark Milley said this hypersonic missile test may be the "Sputnik moment" for this generation, recalling that October day in 1957 when we awoke to learn the Soviet Union of Nikita Khrushchev had taken the lead in the space race.

Lately, we have learned that China is erecting hundreds of silos to house missiles that can put at risk U.S. cities from L.A. to D.C.

On one four-day period in October, China sent 149 fighters and bombers through the air defense identification zone of Taiwan.

Also in October, a fleet of five Russian and five Chinese warships sailed through the Tsugaru Strait between the Japanese home islands of Hokkaido and Honshu, out into the Western Pacific and then back through the Japanese archipelago into the Sea of Japan.

Message China is sending with its missile tests, warships and warplanes:

"We, also, have a Monroe Doctrine."

"The South China Sea is ours, as are the Spratly and Paracel Islands within, and all the rocks and reefs we have occupied and fortified. The Taiwan Strait is ours, as is the island of Taiwan and its people. Any attempt by the regime in Taipei and its U.S. allies to declare independence will be regarded by China as an act of war. The nearby Senkaku Islands, though claimed and occupied by Japan, are ours also."

Message to Japan, South Korea and the Philippines from Beijing:

"As the 20th was the American Century in the Pacific, the 21st century in East Asia and the Western Pacific will be the Chinese Century."

What is China's goal here?

Almost surely not a war with the United States, which could rapidly escalate into as great a disaster for us both as World War II was for many of the victors as well as the vanquished.

The strategic goal for China is the dissolution of the U.S.'s alliances with South Korea, Japan, the Philippines and Australia; the adoption of a neutral or pro-China stance by the nations of East Asia and the Western Pacific; expulsion of U.S. military from the region back to Guam and Hawaii; and the absorption of the region into China's orbit, not America's.

China aspires to become the new hegemonic power of East and South Asia and the Western Pacific, displacing the United States.

Nor is this so wild a dream.

While the Chinese navy is not today a match for the U.S. Navy with its carrier battle groups, China's navy and army are larger than ours, the largest in the world, and in any conflict would be fighting for and from their own country, not someone else's.

Today is Veterans Day, commemorating the 11th day of the 11th month, November, of 1918, when the greatest war in modern history ended with an armistice after millions of war casualties and civilian deaths.

It had begun the way Chancellor Otto von Bismarck said it would, because of "some damn fool thing in the Balkans"—the assassination of the Austrian Archduke Franz Ferdinand in Sarajevo.

If there is a great war between China and the United States, it will likely be because of some damn fool thing in the Taiwan Strait.

Avoiding that war should be the first order of business of both the Communist Party of China and the democratic capitalists of America.