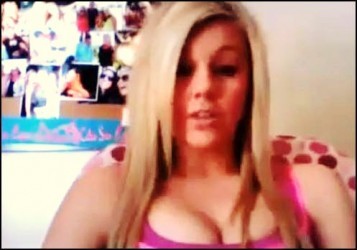 [James Fulford writes: We're reposting this Open Letter, which Jared Taylor posted last night on American Renaissance, with added links because it's important—since we last blogged, Miss Wallace has been forced to drop out of UCLA, where she was a member of white minority group on the UCLA campus. Her experience is instructive as to what the rest of us can expect if we allow ourselves to become a minority. Do not expect affirmative action or reparations.]

Welcome to fame you never wanted.

By my count, since you posted your YouTube video about Asians at UCLA on March 11—10 days ago—some six million people have watched it. You took it down two days later, but it went viral anyway. There are now scores of "replies" and "parodies" on YouTube, most of them vile, many of them obscene.

National newspapers have held you up to ridicule, and UCLA's vice chancellor for student affairs Janina Montero [Email her] says she is "appalled and offended." After a week of enduring what you say were "the harassment of my family, the publishing of my personal information, death threats and being ostracized from an entire community," you have decided to drop out of UCLA. [UCLA student who made controversial video says she'll leave school | L.A. NOW | Los Angeles Time, March 18, 2011]

What exactly did you do? You said "hordes" of Asians attend UCLA. In fact, there are more Asian than white undergraduates—37 percent vs. 32 percent—so whites are a minority. They don't call it "UCL Asian" for nothing. You said the number of Asians was "fine" with you but that if they were going to come to UCLA they should learn American manners. Specifically you said they should not use cell phones in the library, and you imitated how they talk. You also said that the families of Asian students come to cook and clean for them, so that Asian students never learn to "fend for themselves." Tasteless, perhaps, but hardly shocking.

I'm sure you feel you are being punished terribly for a trivial mistake—for something that might not even be a mistake at all. I'm sure you are bewildered and frightened, and I suspect no one in your circle can explain what is happening.

Let me try. Perhaps it is beginning to dawn on you that your sin was not what you said but who you are.

If you were black or Hispanic and made a mocking video about Asians no one would care. The Asians and others who have made video "replies" address you as "bitch" and say awful things about your appearance and imagined sex habits, but no one has criticized them. Many of them seem to be students. Is the administration "appalled and offended"? Have they received death threats? No.

In 2005, Kamau Kambon, a black man who taught Africana studies at North Carolina State University said on C-SPAN that all whites should be exterminated. It caused hardly a ripple. Just last year, Professor Kent Wong of your very own UCLA urged non-whites to "become lawyers, and teachers, and doctors and members of the U.S. Senate [and] replace those old white men." Was Vice Chancellor Montero "appalled." No. But she is appalled at you. Why?

Maybe Pearl Cleage [Email her] can help you understand. She is a black poet and playwright, just the sort of person you might have had to read in high-school English. This is what she says about race:

"In discussions of race between black people and white people the conscious black person is always right; is always the ultimate authority on questions having to do with race and racism; must always be regarded as the 'injured party,' or the oppressed. . . . [Whites] cannot possibly be expected to be objective about questions of race." [Pearl Cleage, Deals With the Devil and Other Reasons to Riot

That, italics and all, sums it up, and what Miss Cleage says about blacks applies to all non-whites. They are your moral superiors, and you must defer to them on the subject of race. In fact, it's safer to defer to them on other things, too. You never know when disagreeing with a Hispanic could be "racism." Non-whites, on the other hand, don't have to be "sensitive." They can mock you, insult you, imitate your accent, insist that you learn their manners, but you, Miss Wallace, are different. You must never do these things.

None of this is fair, Miss Wallace. Just three minutes of what you thought was harmless video have changed your life. And what have you learned? The lesson Vice Chancellor Montero wants you to learn is the same one Pearl Cleage wants you to learn: that you are always wrong, always the oppressor. She wants you to apologize, hang your head, and be guilty all your life.

I hope you learn different lessons. They are difficult lessons that will destroy your illusions, but the sooner you learn them the stronger you will be. You have already learned that when populations change, culture and behavior changes. I hope you will learn that as a white woman, as someone descended from the stock who built this country and established its institutions, you have the right to notice and care. If newcomers are changing this country in ways you don't like, you have the right to say so. You have the right to want your country to remain part of the West rather than become a chaotic mix of conflicting peoples and cultures.

I hope you learn that double standards about "sensitivity" are not just about tormenting one white woman and ignoring the vicious behavior of her non-white attackers. Those double standards mean that no white person may ever stand up for his own values and culture. They mean that non-whites may work for explicitly racial goals but whites may not. Ultimately, Miss Wallace, double standards that deny to whites what they permit to non-whites ensure that your people and your culture will be elbowed aside.

These are difficult and painful truths. It often takes years to grasp them. But you will understand what has happened to you only if you can see through the lies and deceptions that distort everything you have ever been told about race.

In the eyes of the people who are driving you off campus, your greatest sin, Miss Wallace, is that you are white.

Jared Taylor (email him) is editor of American Renaissance and the author of Paved With Good Intentions: The Failure of Race Relations in Contemporary America. (For Peter Brimelow's review, click here.) The long-awaited sequel, White Identity: Racial Consciousness In The 21st Century, will be published this year. You can follow him on Parler and Gab.