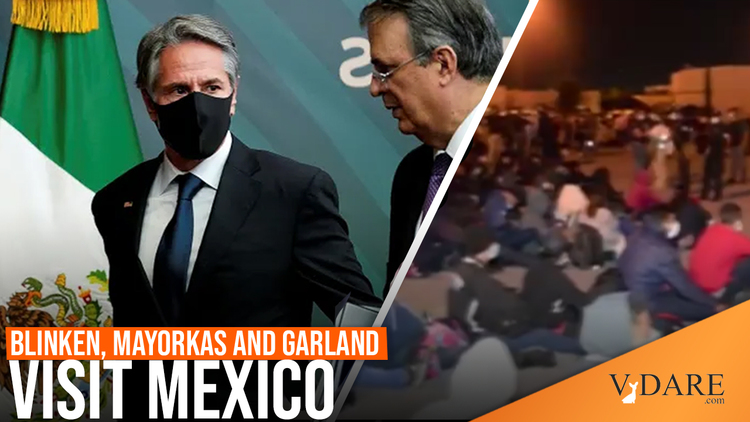 Sounds innocuous enough, unless you know some Spanish and something about the language. The masculine gender is the default position in such an instance. If one says todos to a mixed male/female group, that means “all” or “everyone.” Todas is unnecessary.

But Mexico, like the United States, has its Cult-Marx Language Commissars. They demand todas y todos to be inclusive, which is completely unnecessary and awkward but certainly in vogue.

But on to something more important to the Historic American Nation: the ongoing invasion of Haitian illegal aliens.

“We also are trying to be very clear that if they seek to make that journey in an irregular manner, they put themselves at tremendous risk along the entire route, and they will not be able to enter the United States,” Blinken said.

Really? After Mayorkas imported almost 15,000 Haitian illegals, Blinken expects us to believe that?

As for AMLO, he discussed the history of Mexicans fleeing to the United States:

[T]here are things that unite us: history, our cultural relationships, now 38 million Mexicans in the United States, the 3,180 kilometers of border, economic changes and commercial changes in the world. These things demand us to have greater unity, to integrate and consolidate as an economic and commercial region.

Mexico continues to detain at least some illegals crossing its territory, and so I again observe that every illegal Mexico detains and deports is one less we Americans must worry about.

On October 7, trucks traveling from Ciudad Victoria to Monterrey were stopped at a military checkpoint. Immigration authorities heard voices in shipping containers and found them jam-packed with illegal aliens.

Of course, they had no food, no water, and precious little air to breathe.

With the use of gamma rays, the INM and the Interior Ministry, in coordination with the Defense Department, rescued last night 652 migrants of different nationalities, who were being transported in three trailers with two shipping containers each, in crowded conditions and without ventilation. …  Elements of the Mexican Army detained and put at the disposition of the corresponding authorities 4 persons for allegedly engaging in people trafficking.

Of the 652 detained, 349 were children and adolescents, and of that number, 198 were unaccompanied.

All were taken south to immigration stations [Trasladan a 652 migrantes rescatados a estaciones migratorias del sur de Mexico (“The 652 rescued migrants taken to migratory stations in the south of Mexico”), by Alfredo Pena, Excelsior, October 9, 2021].

Guatemalan police confronted a similar smuggling attempt two days later when they answered a call about an abandoned trailer. Inside they found 126 illegal aliens.

The national police tweeted the news:

Shouting and striking were heard from inside the container. Inside were found 126 undocumented persons: 109 from Haiti, 11 from Nepal and 9 from Ghana. Medical attention was provided and then they were taken to the shelters of the Guatemalan Migration Institute.

Wait a minute! Eleven of the illegals were from—Nepal??!

Good News: Mexico Is STILL Deporting At Least Some Illegals

“This Wednesday [October 6], the INM carried out the return of migrants from Haiti, in accordance with human rights and with the consular authorities of Haiti,” Mexico’s immigration agency reported [Retorno de personas migrantes originarias de Haití (“Return of migrants from Haiti”), Gob.mx, October 6, 2021]. “The flight departed from Tapachula, Chiapas, with 129 passengers, to the international airport of Port-au-Prince, in that Caribbean country.”

Mexican media use repatriación, meaning repatriation, to describe deportations, instead of the obviously correct word, deportación.

The latter, of course, offers a more benign view of what Mexico is actually doing.

On September 21, Carlson offered this about the Haitian siege of Del Rio, Texas:

A full month ago to the day, on August 21st, the Mexican newspaper Milenio reported the first wave of Haitian migrants had arrived in Mexico. There were 30,000 of them. According to the paper, they were not docile and they were not grateful to be there. Instead, they tried to storm government facilities, quote: “Elements of the National Guard are guarding the installations of the offices of the Mexican Commission for Assistance to Refugees after a fight among Haitian migrants who attempted to enter these installations by force.” That was in the paper on August 5th. “There were verbal aggressions and tension.”

[Tucker blasts Biden over immigration crisis: ‘He did this on purpose,’ Fox News, September 21, 2021]

Carlson cited the same two Milenio articles I did, and included my translation!

Things look grim for us, but we’re getting the word out. Consider giving to VDARE.COM today! Click here to donate.