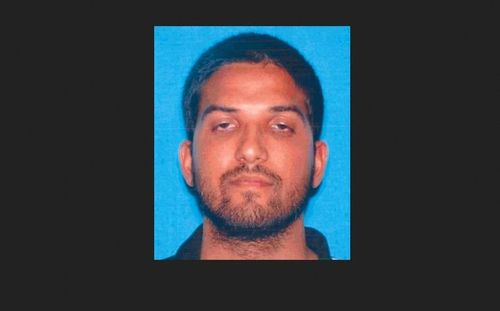 San Bernardino: The Answer Is An Immigration Moratorium—And Muslim Expulsion

There is one indisputable fact about Wednesday’s shootings in San Bernardino: if the family of Syed Rizwan Farook had not been allowed to immigrate 30 years ago and if he had not been allowed to import his fiancée Tafsheen Malik from Pakistan in 2014 as part of the ongoing “family reunification” scam, they would not have been able to murder 14 innocent Americans in 2015.

There are, of course, plenty of native-born American criminals. But, ignored by the Mainstream Media, mass murders by immigrants have quietly but unmistakably become a real Trend. A quick count shows 60 cases in the last 30 years, for a total of 472 deaths, 183 wounded. (For example, see here and here). Maybe it's because some of these immigrant killers come from chronically violent parts of the Third World. Maybe, as our Brenda Walker has suggested, it’s because of the very real but rarely-discussed psychological stress of transcultural migration. We don't know. And nobody in the American elite is asking.

Americans know from bitter experience that, now that the immigrant non-whiteness of the San Bernardino mass murderers has been established, the whole episode will go straight down the Orwellian Memory Hole. If it is left to the American elite, nothing will change.

Thus my first three paragraphs above are, in fact, adapted (e.g. the Google news searches are new) from the first three paragraphs in Virginia Tech Massacre: Gun Control—Or Immigration Control? which I posted on VDARE.com on April 18 2007, after Korean immigrant Seung-Hui Cho killed 32 people. On present form, I will be still recycling them in 2023.

For that matter, it’s more than fourteen years since I wrote The Role of VDARE.COM After 9/ll: It's The Immigration, Stupid. The Ruling Class’s response: the rate of Muslim immigration doubled—over 1.6 million have entered the U.S. since 9/11.

For example, “a source told CBS News that the pair were looking at ISIS propaganda online” [More details revealed about San Bernardino shooting suspects, December 3, 2015]. (How do they know?) But, of course, nobody seems interested in finding these online sources and launching the kind of witch-hunt directed at the Council of Conservatives Citizens because its—entirely factual—reports of disproportionate black-on-white crime were mentioned by Charleston Church killer Dylann Roof.

Points that don’t interest the MSM—but interest us at VDARE.com:

Although with impressive discipline the MSM refers to the site of the killings as a “Holiday Party,” and I’m quite sure that’s what the liberal bureaucrats at the San Bernardino County Department of Public Health called it, of course it was actually a Christmas party. Indeed, NBC’s Kerry Sanders has speculated that an accidental reference to its true nature might have provoked Farook’s reported angry departure: NBC Journo Speculates on San Bernardino Shooting: Maybe ‘Christmas Party’ Was a ‘Trigger’, by Alex Griswold, Mediaite, December 3, 2015.

If Christian churches in the U.S. were not completely degenerate, they would be raising hell about Christophobia right now. Imagine the uproar if this was an attack on a Jewish gathering. (In fact, you don’t have to imagine).

Of course, NBC's talking heads probably think that further Christian self-abnegation would have made Farook happy. But “Holiday Party” already represents massive self-abnegation—and it didn’t work. My message to Christians: you can wimp, but you can’t hide.

All too obviously, Farook and his wife flew under the security services’ powerful radar [San Bernardino shooting suspects raised few red flags before 'horrendous' crime, by Roy Carroll etc., The Guardian, December 3, 2015), This is particularly devastating because Tafsheen Malik came here on a fiancée visa which allegedly “has one of the more rigorous security screening processes — presenting far more hurdles than other avenues for foreigners to enter the U.S.” [This Is How Suspected California Shooter Used a 'Fiancé Visa', by Ari Melber, NBC News, December 3, 2015].

But this “rigorous security screening” failed too.

Which is very helpful information when assessing the Obama Administration’s lying claims that the Syrian “refugees” will be carefully “screened.”

Of course, what is needed, as Steve Sailer has long argued, is a National Immigration Safety and Quality Board, modelled on the National Transportation Safety Board.

While we’re on this subject, Farook's brother, Syed Raheel Farook, reportedly served in the U.S. Navy from 2003 to 2007, attached to the crew of the aircraft carrier USS Enterprise, serving as an information systems technician. [Radicalized US Muslim was teased by colleagues about his Islamic beard and had clashed with Jewish co-worker over religion before he and Pakistani wife killed 14 at San Bernardino holiday party, by Ben Ashford etc., Daily Mail, December 3, 2015].

Does that make anyone feel better?

Syed Rizwan Farook was reportedly born in Illinois, the son of Pakistani immigrants, graduated from college, had a career, and appeared (as the cliché has it) to be living “The American Dream.” Yet he still was overcome by “Sudden Jihad Syndrome.” Or, as Refugee Resettlement Watch’s Ann Corcoran puts it: Don’t get hung up on screening! It’s the second generation immigrant jihadists we must worry about.

A typically metaphysical MSM debate is currently raging as to whether the San Bernardino killings were “terrorism.” VDARE.com’s position: it doesn’t matter. Many immigrant mass murders are not by Muslims, but nevertheless reflect some profound alienation from American society. The answer: no immigration.

Tragically, even co-workers otherwise unsuspecting of Farook saw the symptoms:

Harrison described Farook as "very passionate" about his religion, and said that both he and his wife did not want to be in the United States.

Not the least of immigration enthusiasm’s sins is that it has lured marginal people here, into these marginal lives.

Immigration is not a joke, and the emotional effect can linger for a lifetime.

But so can the habits, and vices, of the Old Country. Here’s a report of Ann Coulter breaking the news to a thunderstruck KSAZ anchor Troy Hayden:

Different ethnic groups have sort of different predilections for crimes," Coulter told KSAZ anchor Troy Hayden in an interview to promote her latest book. "And I go through the various groups (in my book) and the various types of crimes."

Hayden then asked her: "You were quoted as saying Mexicans are more likely to rape children. Is that correct? Did I quote you correctly?"

Coulter said it was correct.

"That's a big thing," Coulter said. "You will find a lot of it. And you find the media, the main point I'm making in my book, is how the media hides it."

In addition to the crimes Mexicans are more likely to commit, according to Coulter, she listed other nationalities as well.

"People might say that's very racist talk from you," the anchor pressed her. "You're basically saying this race of people or this nationality of people commit these types of crimes."

In the end, the question is: why take the risk?

And the immediate answer is: an immigration moratorium (Muslims first).

The ultimate answer must be: expulsion. This was the late Lawrence Auster‘s  proposal for dealing with Muslims in the West. He worked this out in considerable detail here; there’s a video version here.

Today, of course, the idea that any immigrant group should be expelled from anywhere in the West is simply unthinkable. But the unthinkable happens quite often