So “Liberal Restrictionist” Jerry Kammer Got To Publish A NEW YORK TIMES Op-Ed. But Only By Conceding The Case For Amnesty.

Numerous friends and colleagues have sent me the recent New York Times op-ed by the Center for Immigration Studies’ Jerry Kammer, excerpted below. Some of the hardest men I know are going ga-ga over it. Old immigration hands, who were breaking bread with the late John Tanton (1934-2019), may he rest in peace, when I was barely out of diapers. Friends of mine who have seen the border and should know better,

When you see that someone has managed to get a piece of the NYT op-ed page, what should your initial response be? Right. Reach for your wallet with one hand, and your gun with the other.

Ask yourself, Would the New York Times ever run an op-ed by Peter Brimelow on immigration? Did it ever run one by John Tanton?

What do you think of “compromise” on immigration “reform”? What sort of thoughts do claims that there are “11 million” illegal human beings, make that “unauthorized immigrants,” presently residing on American soil inspire in you?

In fact, of course, the real numbers of illegal human beings on American soil are much higher. A 2018 Yale University study concluded that there are roughly 22 million illegals on American soil. In a 2014 interview I conducted with Fred Elbel, the old immigration patriot hand who runs the Colorado Alliance for Immigration Reform (CAIRCO), Elbel guesstimated that there were already at least 50 million illegals here. Very presciently, D.A. King suggested 20 million in VDARE.com back in 2004,.

The thing about such estimates is that if you overestimate the number of illegal human beings in your country, there’s no cost, but if you underestimate them, it could cost you your country. [Yale study: Illegal immigrant population likely double, possibly triple previous estimates, by Stephen Dinan, Washington Times, September 24, 2018;  and  The Myth of the 11 Million: Wall Street Analyst Estimates 21-25 Million Illegals Now in U.S., by Nicholas Stix, VDARE.com, November 23, 2014.]

Granted, Kammer does recount his experience in 2001 of being present at a soiree in which Left and Right were gleefully conspiring to destroy the country through mass Third-World immigration:

In 2001, when I was the new Washington correspondent for The Arizona Republic, I attended the annual awards dinner of the National Immigration Forum. The forum is a left-right coalition that lobbies for unauthorized immigrants and expansive immigration policies….

After dinner, the group’s executive director, Frank Sharry, made a pitch to business allies who wanted Congress to allow them unfettered access to foreign workers. “You guys in business get all the workers you want, whenever you want them,” he proposed. “No bureaucracy.”

“Sold!” yelled John Gay, a lobbyist for the American Hotel and Lodging Association. Mr. Sharry quickly added that the deal must include advocacy for “three little, tiny pieces of paper: a green card, a union card and a voter registration card” for unauthorized immigrants.

For me, a reporter who had long covered immigration in the Southwest and Mexico, the exchange was a revelation about the politics of immigration in Washington. Business lobbyists like Mr. Gay — conservatives who seek loose labor markets so employers can keep wages down — align themselves with liberal activists like Frank Sharry to pursue policies that serve their groups. [Links added.]

Kammer recalls statements made years ago by leading Democrats like Walter Mondale and Hillary Clinton about how impoverished, Third-World immigrants were bringing mass poverty to America.

And he says nice things about the American working class.

He even notes that in the 1986 IRCA amnesty, the Open Borders Lobby got what it wanted, but the patriots who compromised with them got nothing.

This mismatch of political influence, combined with the social and fiscal consequences of a wave of low-skilled immigrants, led me to believe that immigration should be restricted so that its power to invigorate our country is not eclipsed by its potential to harm workers. I think immigration, like capitalism itself, should be regulated in the national interest, not shaped to serve the free-market libertarianism of the right or the post-national humanitarianism of the left.

That’s why I call myself a liberal restrictionist.”

[I’m a Liberal Who Thinks Immigration Must Be Restricted, by Jerry Kammer, New York Times, January 16, 2020.]

But here’s where things go off the rails. After Kammer admits that the 1986 compromise was a wholly one-sided deal, and emphasizes his support of the American working class, he calls for…another Amnesty dwarfing INA!

This is Lucy-Charlie Brown stuff here.

The 1986 Reagan (Simpson-Mazzoli) Amnesty has cost white American taxpayers hundreds of billions of dollars, and will cost us billions and billions  more in perpetuity; it has cost us the rule of law; and the economic dispossession and legal disenfranchisement of white Americans. We still have ever more chain migration and anchor babies.

Kammer then proceeds to undercut his own employer:

I disagree with some of the center’s [CIS’] hard-line [?!] positions. I favor a generous welcome for those who were brought here illegally as children and support comprehensive reform that would reprise the 1986 amnesty-plus-enforcement compromise. But restrictionists are right to insist that any new reform must guarantee work-site controls. They also make valid points in pushing for a system of legal immigration like the one developed by Canada, which favors people with education and skills.

But Kammer’s “generous welcome” would go to at least a million illegals, right off the bat, plus at least another 10 million of their “relatives,” through chain migration, plus millions of anchor babies.

In other words, it’s a nation-breaking Amnesty.

How could any immigration patriot fall for such a load of hooey?

Kammer’s essay runs 1,444 words, an eternity for an op-ed, much of which he used to build up his credibility as a restrictionist, only to smuggle in the big con. Maybe some of my friends read his thing superficially, after he threw them a bone or two, or even stopped reading at that point. 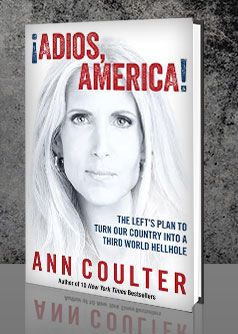 This is not the first time that Kammer has done this sort of thing. In 2015, he attacked the heroic Ann Coulter and her great book Adios America, despite the evidence that it had inspired Donald Trump’s famous campaign announcement, surely the most successful in American history and by far the best thing that has ever happened to immigration patriotism. In 2010, he attacked John Tanton despite the fact that Tanton had founded and organized funding for CIS, the organization that pays his salary.

There are actually some great people at CIS, but I won’t praise them by name, because I don’t want them to get into trouble for being associated with yours truly.

However, CIS bosses Mark Krikorian and Steven Camarota have a long record of triangulating, against other immigration patriots in order to get table scraps from Leftist media organizations. So it’s ironic that Kammer is now triangulating against them. But no matter how much they beg for respectability, Treason Lobby groups like the SPLC will always whip them with the “hate group” label.

Just give up triangulating, CIS! And rein in Kammer.

We don’t need another mass Amnesty. We need a moratorium—no net immigration—a wall, and a new Operation Wetback to send the criminals of all ages, and their anchor babies, home.

Nicholas Stix [email him] is a New York City-based journalist and researcher, much of whose work focuses on the nexus of race, crime, and education. He spent much of the 1990s teaching college in New York and New Jersey. His work has appeared in Chronicles, The New York Post, Weekly Standard, Daily News, New York Newsday, American Renaissance, Academic Questions, Ideas on Liberty and many other publications. Stix was the project director and principal author of the NPI report, The State of White America-2007. He blogs at Nicholas Stix, Uncensored.