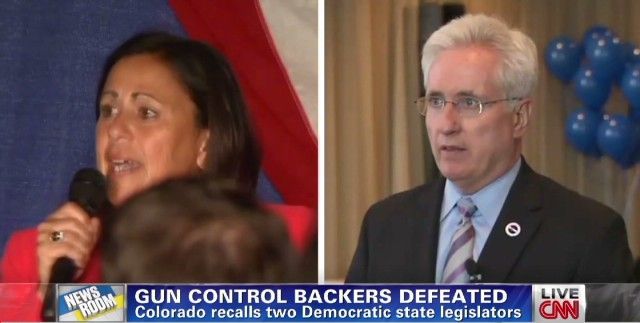 The Fulford File | After The Successful Colorado Recall We Ask “Why Can Gun Grabbers Have A “Moral Panic” After An Immigrant Mass Murder, But Immigration Patriots Can’t?”

“Colorado voters Tuesday ousted two state senators who succumbed to the post-Newtown moral panic and voted to enact new restrictions on law-abiding firearms owners” wrote James Taranto in his WSJ Best Of The Web column. [September 12, 2013]He calls the story of the Colorado recall elections a “feel-good story” and a triumph of democracy. But, as he notes, the New York Times Editorial Board says it’s a "a disgraceful low point in punitive single-issue politicking by the gun lobby.”[Hard Lessons of the Colorado Recall, September 11, 2013]

Thinking about how unhappy it has made the NYT Editorial Board, whose evil purpose has for years been to impose New York-style gun control on the rest of America, is part of what makes people like Taranto and myself (we’ve had many disputes but agree on this issue) feel good.

Michelle Malkin, who lives in Colorado, is a gun owner, and doesn’t want to be disarmed by an out-of-state campaign funded by billionaire Michael Bloomberg, covered this issue in her columns here, here and here. See also DNC Chairwoman: We Lost Colorado Gun Vote Because We Couldn't Cheat, By Patrick Cleburne. 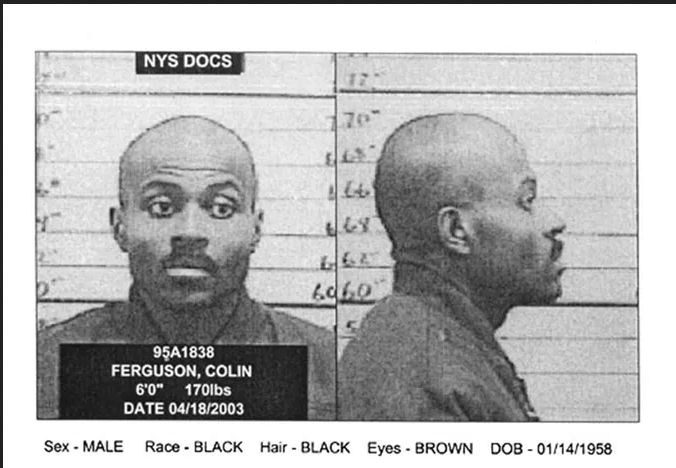 Colin Ferguson, the Long Island Railroad Gunman, was a black immigrant from Jamaica mentioned in VDARE.com Editor Peter Brimelow’s 1995 book Alien Nation as a counterexample to all the claptrap about worthy immigrant entrepreneurs, valedictorians and such.

Here's what the late Lawrence Auster had to say about Ferguson's reason for shooting up the white passengers of the Long Island Railroad:

This past December, a Jamaican immigrant named Colin Ferguson opened fire in a Long Island Rail Road commuter car, killing six and wounding nineteen. In hand-written notes carried in his pocket, Mr. Ferguson made undeniably clear his motive for murdering a bunch of white strangers: revenge for the racism he saw lurking behind every disappointment in his life.

Without missing a beat, the liberal establishment rushed in for damage control, declaring that the carefully planned massacre was simply the “incomprehensible” and “meaningless” act of a deranged man. “No more sense can be made of such a thing than of a typhoon or cyclone,” wrote Luc Sante in the New York Times. “Forget the gunman’s declared motive of racial hatred [emphasis added]. When someone with a semiautomatic weapon starts perforating citizens en masse, the question of motive evaporates.” Governor Cuomo of New York struck a similar tone of bemused detachment, saying that the massacre was “unfathomable.”

Unfortunately, nothing could be more “fathomable” than Colin Ferguson’s act of hatred. [More]

Ferguson is an early example of what we at VDARE.com call Immigrant Mass Murder Syndrome. He's also an example of the black spree killer, who gets so much less publicity than the white ones—see my Jezebel: "Have You Noticed That White Dudes Keep Mass Murdering People?" No, We've Noticed You Promoting It.

One of the victims of Ferguson’s black hate crime was a man named Dennis McCarthy, whose widow went into politics as a result, and is now Rep. Carolyn McCarthy (D-N.Y) (below). 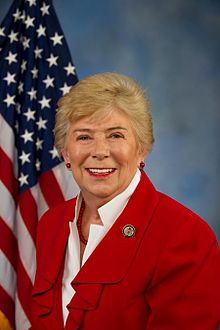 A Mother Jones story, which describes Ferguson only as a "disturbed man," explains how since the murder of her husband by (remember) a deranged black Jamaican immigrant who hated white people, McCarthy has been working tirelessly to deprive white Americans outside New York State of their gun rights. (Ferguson had bought a gun in California.) ["You've Got to Pick Yourself Up and Go Forward." Since losing her husband in a 1993 mass shooting, Rep. Carolyn McCarthy has never stopped fighting for gun safety laws., By Gavin Aronsen, April 9, 2013]

As I wrote about the similar case of the late Pete Shields (founder of Handgun Control, Inc): if, instead of thinking that her husband was the victim of an uncontrolled gun, Ms. McCarthy had decided to either become an immigration restrictionist, or to found something like American Renaissance, she wouldn’t be a Democratic Congresswoman—nor would she be getting all this good press from Mother Jones. She’d be being investigated by the Southern Poverty Law Center ($PLC to VDARE.com) like the rest of us.   As it is her NumbersUSA grade is a disgraceful D.

Another gun control “moral panic”: Palestinian lone wolf terrorist Ali Hassan Abu Kamal, who opened fire on the top deck of the Empire State Building on February 23, 1997. I mentioned him in my first post-9/11 column, on September 19, 2001:

“When Colin Ferguson, the Jamaican immigrant mentioned in Alien Nation, shot up the Long Island Railroad, or Ali Hassan Abu Kamal opened fire on the top deck of the Empire State Building, [New York Mayor Rudy] Giuliani called for restrictions on the freedom of …Americans.”

At City Hall, Giuliani attempted to shift the focus toward gun control. He was accompanied by Rep. Carolyn McCarthy, D-N.Y., whose husband was killed and son wounded in the 1993 shootings on a Long Island Rail Road commuter train that killed six people and wounded 17.

In both that incident and Sunday's shooting, the gunmen circumvented New York's strict gun control laws by traveling out of state to buy the murder weapons, officials said.

"New York State, New York City have great gun control laws," McCarthy said. "But as the mayor said, we cannot control all the guns that are coming in from other parts of the country and that's what has to be stopped

But ten years later, in 2007, Kamal’s daughter revealed that his motive was political (hatred of Israel and the US) and that efforts by her at the time to say otherwise were encouraged by the Palestinian Authority, which didn’t want to foul up “peace” negotiations. She cited a letter found on Kamals’s body–presumably by the NYPD.

“[T]hree days after the shootings, Kamal's family got a copy of a letter that was found on his body, they said. The letter said he planned the violence as a political statement….”

But note that this letter wasn’t just suppressed by the Palestinian Authority—it was also suppressed by Rudy Giuliani’s NYPD, which made no public announcement of it at the time. Thus a contemporary headline said Empire State Gunman Gave No Hint of Anger, His Hosts Say, By Matthew Purdy, NYT, February 27, 1997.

And of course, Giuliani was using the incident to try to keep guns out of  the hands of white Americans in Florida.

It makes immigration enthusiasts angry when you mention this stuff.

They were angry when Peter Brimelow mentioned Ferguson in 1995.Christopher Hitchens’s review of Alien Nation was disapproving of the mention, Lawrence Chua in the Village Voice called the mention of immigrant murders “free-associating”, Christopher Farrell in  BusinessWeek in thought it was a “bizarre digression”, Law Professor Hiroshi Motumura thought it was racist:

” Brimelow professes some concern that immigration adversely affects African Americans. Yet, he provokes... Brimelow asserts that were it not for U.S. immigration policy, Colin Ferguson, with his "hatred of whites," would not have come to this country, and no one would have been killed in the Long Island Rail Road shootings...”

In 2007, they were angry again when Brimelow wrote after Korean spree killer Seung-Hui Cho’s slaughter of 32 people a Virginia Tech, that

There is one indisputable fact about Monday's shootings at Virginia Tech: if Seung-Hui Cho had not been allowed to immigrate to the U.S. in 1992, he would not have been able to murder 32 innocent people here in 2007.

Brimelow was attacked by both ImmigrationProfBlog, and by an Asian-Canadian blogger who wrote, theatrically, Peter Brimelow is a Broken Man, April 19, 2007. (“Broken” because “hate” is bad for the soul, apparently.)

There was more of the same after the Boston Bombings, when “refugees” from Dagestan killed three and injured 264 Americans. Shikha Dalmia [Email her] in the libertarian magazine Reason wrote Anti-Immigration Conservatives Get Silly After Boston Bombings What does allowing more economic immigrants from Mexico have to do with stopping random terrorists? [April 30, 2013]

But, in fact, not only is their own fear of guns and ordinary Americans with guns phobic, their lack of fear of people who want to kill Americans including them is another kind of sickness–a sickness that really does get them killed, because of course they’ll be unarmed.

Too bad immigration enthusiast James Taranto, who attacked Peter Brimelow over a Mexican mass murderer, and me over Bush’s Arab bodyguard, doesn’t see the connection.

James Fulford [Email him] is a writer and editor for VDARE.com